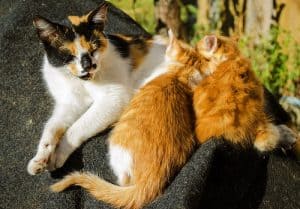 Have you ever wondered if your female feline is still young enough to have her own kittens? Maybe you’re hoping to breed her – or maybe you’re just curious! Either way, at what age do cats stop having kittens?

Cats generally stop having kittens around five years of age. However, can continue having kittens for their entire lives as they do not experience menopause. As a cat ages, her litters become smaller and spaying is recommended to avoid pregnancy complications.

Pregnancy becomes more burdensome on an older cat’s body after that; the older she gets, the more risky a pregnancy is for both mother and kittens. But you may still wonder – especially if you’re considering breeding your feline – what age should you let your cat have kittens? How many times can a cat get pregnant in her life? And what about male cats – when do they stop reproducing?

Can An Old Cat Get Pregnant

Yes – an old cat can get pregnant! It seems counterintuitive since humans reach an age where getting pregnant is no longer an option. Plus, when is the last time you saw a pregnant old cat?

We don’t often see older cats pregnant because spaying and neutering is such a common practice these days. Plus, it can become very dangerous for a mama cat if she gets pregnant and gives birth too old. But, technically speaking, cats never reach an age where pregnancy is out of the question.

When Is A Cat Too Old To Have Kittens

Around five or six years of age, a cat is too old to have kittens ­­– in terms of her health – and should stop getting pregnant. Cats can get pregnant and give birth throughout their senior years; however, getting pregnant at too old can be detrimental to a feline’s body and health.

Cats don’t get menopause-like humans, so their bodies continue to cycle for their entire lives. However, as a cat ages, her litters often become smaller. According to experts, it’s best to cut off the breeding cycle at around five years of age and have a feline spayed.

Many breeders elect to spay their queens at around age five; the health risks are too great for mama and kittens!

At What Age Should I Let My Cat Have Kittens

It would help if you waited until your cat (or, as many breeders call her, your queen!) is at least 18-24 months before even considering the breeding process. While cats go into heat for the first time around six months – and are physically able to get pregnant – that’s way too young for a feline pregnancy.

Ensure that your fertile feline is strong and well-developed before filling her up with little kittens. If a queen gets pregnant at too young of an age, it can be extremely harmful to her physical health. Instead of focusing her energy on growing big, strong, and healthy (as young cats should!), she’ll instead need to shift that energy toward feeding her kittens. This could cause a lot of permanent damage to her development.

Additionally, also ensure that your kitty queen is healthy before breeding! For her sake and the sake of her future kittens, have an expert check her for genetic disorders or underlying illnesses. Make sure she doesn’t have other issues such as ringworms, ear mites, or fleas before getting knocked up!

How Long Can Cats Have Kittens

Cats can have kittens, essentially, throughout their entire lives! It’s one significant difference between feline and human biology (among, of course, many, many other differences!).

While women eventually reach a point where they can no longer get pregnant (hello, menopause!), cats don’t experience this.

Around the age of six months, a cat hits her first estrous cycle – or goes into heat for the first time – and can start getting pregnant. Then, well, the fun just never stops from there.

The oldest cat to ever get pregnant was named Kitty; she birthed two kittens at the age of 30!

How Many Kittens Can A One-Year-Old Cat Have

On average, a one-year-old cat may birth a litter of around four to six kittens. However, kitten litters can range from anywhere between one and nine newborn cats!

The largest recorded litter of kittens was 19! In 1970, a Burmese/Siamese cat in the UK pushed out that giant quantity of newborns! Don’t worry, though – that’s very unusual! In fact, generally speaking, a queen’s first-time litter will be smaller than average; so if your one-year-old feline is pregnant for the first time, you likely will only need to prepare for a few tiny kitties.

How Many Times Can A Cat Get Pregnant In A Lifetime

An average cat can first get pregnant at around six months; the average gestation period for a cat is two months; cats can birth up to three litters a year; they can continue to get pregnant throughout their entire lives; the average lifespan of a cat is about 15 years.

Cats can have kittens as early as six months in age. A cat will have her first estrous cycle (or go into heat). She will continue to have these cycles twice a year, in the spring and the summer. (However – indoor cats may get an estrous cycle every month. This cycle is in coalition with melatonin, which slows down in the fall and winter due to the shorter days; cats’ bodies exposed to an artificial day-night cycle might get confused and go into heat more often.)

So, simple math says that a cat can, technically, get pregnant over 40 times in her life.

But, please keep in mind! Just because she can get pregnant many times throughout her life – certainly does not mean she should! Just like with humans, pregnancy puts a massive strain on a cat’s body.

Do Cats Get Too Old To Have Kittens

While cats can get pregnant throughout their entire lives (even senior cats!), they do reach an age where it’s unhealthy – and even dangerous – to have kittens.

Most experts recommend stopping the breeding process and having a female cat spayed, around five or six years of age. Yes, older cats can get pregnant and give birth with little to no side effects or health issues. However, the risks increase greatly the older she gets.

Pregnancy can put too heavy of a strain on a senior cat, and birth can be too difficult for her body.

Unlike humans, cats do not, in fact, experience menopause! They go through a comparable experience to menstrual cycles; starting around four to six months of age, female cats get their first estrus cycle, which means they can start getting pregnant. Each cycle (or going into heat) lasts about six days.

However, though cats get their “period,” they do not also experience menopause. This means a female cat can technically get pregnant throughout her entire life, even as a senior.

At What Age Do Male Cats Stop Reproducing

Like female cats, male cats don’t ever stop reproducing, regardless of their age. Some male cats are infertile, although that has nothing to do with their age; it’s usually chalked up to genetics.

Since male cats can continue to reproduce throughout their lives, it’s even more reason for neutering! Especially if you have a male outdoor cat, he’ll never outgrow his ability to sire a litter; this is a big part of the feline population problem.