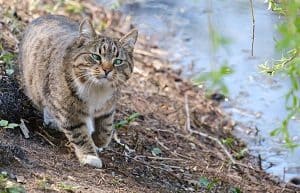 It’s always a good time when you’re hanging out with family and you decide to play some games with your cat. You might notice that your cat is not always walking a straight line after an intense play session. They might even appear dizzy at times. This might be a reason for concern, and it’s not always fun for your cat. So, can cats get dizzy?

Yes, cats can get dizzy. Dizziness is caused by spinning around and losing balance. Cats who are often disorientated may be suffering from vestibular disease which requires veterinary diagnosis.

While it may take a bit more effort for a cat to get dizzy vs. a human, it does happen. Let’s take a closer look at some of the details surrounding dizzy cats.

Yes, cats do get dizzy like humans. As said above, it may take longer for a cat to get dizzy compared to a human. Let’s face it; it doesn’t take long for the average human to spin around a few times to the point of tripping over themselves when they start to walk.

Have you ever decided to play with your cat using a laser pointer? This is probably a common toy that can result in a dizzy cat. Cat’s go crazy over a laser pointer. If you were to move the laser pointer around in a circle quickly, your cat can’t help themselves but chase it.

When they’re running around in circles for too long, you may notice they don’t seem as balanced on their feet for a few moments when they start to talk. That’s because your cat is dizzy.

What Happens When A Cat Gets Dizzy

When a cat gets dizzy, you’re going to notice some similar behavior to a human. They’re going to stumble around a bit and probably have trouble walking around in a straight line. They’ll look like they’ve had too much to drink.

We all know cats are the masters of maintaining balance, making it a lot easier to tell when something is off. You might notice they’re not making jumps like they usually would or that their eyes are having trouble focusing.

How Can You Tell If A Cat Gets Dizzy

As a human, it’s easy to tell if a cat is dizzy. Since cats are the masters of balance, you will notice they seem to be wobbly on their feet.

You may notice your cat starts to miss jumps they usually would, or they struggle to move around like they naturally would. A dizzy cat is going to seem like they’re intoxicated.

If you notice your cat is acting dizzy, it’s essential to take them to a vet to get checked out. A cat getting dizzy can mean their equilibrium is off. A common cause of that is an inner ear infection.

Your vet will run some tests and examine your cat to find out what is causing your cat to become dizzy and how serious it is.

If you decide you want to take your cat for a spin on the floor, I’m sure you’ll find out quickly if your animal is in favor of it or not. Some people swear that their cat loves being spun around on their smooth floors.

Others have said they spun their cats around on the floor and were greeted with hisses and claws shortly after. Different cats will handle being disoriented in different ways.

I would suggest not spinning your cat around in general, because it may be something that makes them uncomfortable. With your animal not being able to tell you for sure, it’s better to be safe than sorry!

Is Making Your Cat Dizzy Bad

Much like spinning your cat in a chair, I would say it’s not scientifically proven that it’s good or bad to make your cat dizzy. From the perspective that your cat can’t talk to tell you whether they like it or not, it may be best to use caution.

Some owners say their cats love being dizzy, but how do they know for sure? It’s much easier to realize if your cat hates being dizzy because they’ll probably freak out. You might have them hissing at you or trying to claw you and get away.

The problem with making your cat dizzy is they don’t have a way of knowing exactly what’s happening and what you’re doing. You can reason with a child and tell them why they are dizzy, what causes it, when it will subside, etc. Unfortunately, we don’t have that option with cats. But how cool would it be if they could talk?

Can Cats Get Vestibular Disease

Yes, cats can undoubtedly develop vestibular disease. Vestibular disease is typically something that will come on quickly. Some may refer to it as vertigo. It isn’t a disease that gradually develops over time, and you’ll notice they are potentially getting it.

If you notice your cat suddenly seems to be tripping over themselves, uncoordinated or tilting their head, there’s a good chance they are struggling with vestibular disease. You may also notice their eyes are rapidly moving side to side.

They aren’t entirely sure what is the leading cause of a cat that has vestibular disease. Since many problems can stem from the inner ear, they do believe ear infections can be a main cause of the disease.

If you’ve ever had an inner ear infection, you’ve probably felt a bit of vertigo yourself. Issues with your ears easily throw off your equilibrium, which keeps you balanced. It’s a terrible feeling. Imagine being a cat and not being able to understand what is happening to them.

Your vet will help find ways to make your cat as comfortable as possible while recovering. In a lot of cases, you’ll see a lot of improvement after 48 hours. Your vet will most likely give your cat some antibiotics to treat any infection along with some medications to help with any nausea they have.

What Are The Symptoms Of A Stroke In A Cat

The symptoms of a stroke in a cat can be similar to your cat dealing with vestibular disease. That is another reason why it’s so important to get your cat to the vet. They’ll be able to do tests and review their symptoms to diagnose what is wrong.

The symptoms you’ll typically see in the stroke are a tilted head, walking in circles, losing their balance, having trouble with their vision, and falling over. Some symptoms that will be a bit different than vestibular disease are seizures and issues with facial movement.

Much like a human, a stroke can impact a cat’s ability to move their face. You may notice your cat is struggling to close both or even one eye all the way. You may also notice they are having trouble moving their lips.

Your vet will most likely want to do some imaging on your cat’s brain if they believe they had a stroke. That mixed with some other testing, blood work, and possibly a need for spinal fluid will allow them to make an accurate diagnosis.

The good thing with cats and strokes is that they usually recover faster and better than humans. You’ll typically see the symptoms they had to subside within a week or two, and the cat will be well on their way back to everyday life.

In the end, if you decide to spin your cat in a chair or do other things to make them dizzy, it’s totally up to you. If you notice your cat exhibiting signs of being dizzy when you haven’t done anything to prompt it, get them to the vet.

But one thing we do know for sure is that cats can get dizzy!

link to Why Do Cats Cry Like Babies - Myths & Explainations

Have you ever been sleeping peacefully when, all of a sudden, your slumber is shockingly interrupted by the grating sound of your howling cat? The howl is sharp, shrill, and loud – and even, oddly,...

It’s one of the worst feelings in the world when you realize your beloved cat is nowhere to be found. While cats are notorious for being adventurous creatures, you will still worry about them going...