Can Cats Have Mental Disabilities – The Surprising Answer! 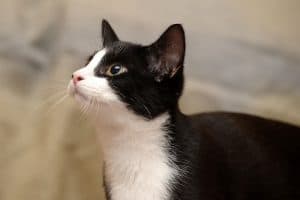 Sometimes cats can be downright weird. There’s a lot about normal cat behavior that doesn’t quite make sense to most people, but what about when a cat is weird, even for a cat? Can cats have mental disabilities?

Cats can have mental disabilities. Diagnosing and treating those disorders is difficult as most cats don’t express mental disorders the way people do. However, there are treatments available for cats, and human families can adapt to a wide range of mental disorders in cats.

Don’t be afraid of rescuing a cat with a known mental disorder or if your cat is diagnosed with a new one. Your vet will be able to help you make accommodations for your cat, and mentally ill cats can be just as rewarding and loving and healthy cats.

Can Cats Have Mental Retardation

It’s hard to say whether cats can have mental retardation because we tend to think of mental disorders that cause lowered intelligence in humans. For one thing, there are no standardized means of testing a cat’s intelligence, so there’s no standard to compare to.

Some conditions can cause cognitive decline, usually associated with senility in cats, and some injuries can cause problems that appear to be lowered intelligence. Still, there’s no way to know for sure.

Generally speaking, though, no, your cat won’t be diagnosed with retardation. They might seem to be a little dull sometimes, but without a way of measuring average feline intelligence, there’s no way to diagnose those behavioral abnormalities.

Can Cats Have Special Needs

Absolutely! There are lots of cats with special needs. Trauma, past abuse, and improper human socialization can all cause cats to develop different kinds of special needs, mentally. Fortunately, there are solutions for anxiety and anger in these cats, though special attention and care from their owners are also critical.

Taking care of these cats can present an additional challenge, but it can also be some of the most rewarding care a cat owner can give.

Can Cats Be Psychotic

This is another area that’s incredibly hard to define for cats. If we look at the DSM 5 (the Diagnostic and Statistical Manual of Mental Disorders), Psychopathy is defined as a combination of antisocial behavior, diminished empathy and remorse, and poor behavioral control.

Cats have empathy, but they display it differently from people and may not be empathetic in the same way people are. So that category is tough to define.

Cats are also usually less social than people and have a very different set of positive and negative social behaviors, making it just as hard to define an ‘antisocial cat.’

For instance, one of our cats is a rescued feral who missed the most critical socialization checkpoints when he was young.

He’s weird, no doubt about it. His behavior doesn’t make much sense to other cats, and he’s very reactive to people. But is he psychotic? Probably not.

Similarly, your cat might be antisocial or mildly aggressive, but it’d be hard to say that they’re psychotic. However, cats can have anger problems or not get along with other cats/people. Learning to manage your cat’s moods can be a challenge, but it can be done. If your cat is struggling, or you’re struggling to manage their behavior, consult with your vet for more options and possible interventions and therapies.

Can Cats Have ADHD

In the case of ADHD, it’s difficult to say one way or another if your cat can have the disorder. Like retardation, there’s no good measure of a cat that’s hyperactive to the point of it being a disorder, but cats can have traits that look an awful lot like ADHD.

There’s no official diagnosis for this disorder in cats, but if you talk to cat owners and even some vets, there’s a consensus that cats can have something like ADHD.

Sound familiar? Don’t worry; kittens can have all of these behaviors without it being a disorder, just like toddlers can! Only when the traits persist in cats that are two years old or older might you be looking at abnormal behavior for a cat.

Can Cats Have Mood Swings

Cats can have mood swings, some cats more than others. Most cat owners will have seen at least one mood swing from their animals, from the cat who desperately wants to play and then suddenly wants nothing to do with their toys to cats who have the zoomies and then suddenly need to groom themselves thoroughly.

Cat mood swings usually aren’t difficult to spot, and even cats with frequent mood swings can be managed relatively easily once you learn their patterns.

Can Cats Have Down Syndrome

This question is incredibly common thanks to the unfortunate fame of Kenny, the white tiger. Kenny’s face, which was malformed due to poor breeding practices, closely resembled the characteristic Down Syndrome face seen in humans.

Many people thought the tiger must have had Down Syndrome even though it’s technically impossible for cats to have that specific disorder.

Can Cats Be Bipolar?

Technically, no. Bipolar is a term used to describe a very specific human disorder that can’t be cross applied to cats.

However, cats do have a similar disorder called Dysthymia. A vet can properly diagnose dysthymia, but it is more common in some breeds. There are both genetic and hormonal components to Dysthymia, so it can be somewhat hard to predict.

Like more behavior disorders in cats, Dysthymia can only be accurately diagnosed in adults, but it can be managed once discovered.

Can Cats Be Schizophrenic

Again, technically no. Schizophrenia is characterized by a disconnection with reality, often with paranoia and hallucinations in humans. Since cats can’t tell us about their reality or tell us that they are experiencing a hallucination, they can’t be diagnosed with schizophrenia.

There is a disorder that can look like schizophrenia though, FHS, or feline hyperesthesia syndrome. Also called rolling skin disorder, this disorder is incredibly complex and involves incorrect pain signals being sent by nerves. There is a distinctive skin rolling that happens at the onset of an episode.

Cats experiencing FHS can appear to be hallucinating, have unpredictable behavior and mood swings, and other behavioral challenges. Whether the disorder is mental, physical, or, a combination is unknown, but vets have considered the possibility of it being related to schizophrenia, epilepsy, and other nervous system disorders.

How Can I Tell If My Cat Has Autism

If you’re worried your cat might have autism or are concerned and want to figure out if your cat has autism, we have good news for you!

Autism is another disorder cats can’t have. They can have traits similar to autistic traits in people, but many of those traits are very normal for cats. There are even a few breed-specific traits that can cause this concern in cat owners, but the vast majority of the time, those traits and behaviors are typical for your cat.

Instead of asking yourself if your cat has autism or another mental disorder, you should ask yourself if your cat is behaving normally for a cat. If they aren’t, try describing their behavior on a trait-by-trait basis instead of attempting a diagnosis. Once you have a list of abnormal traits, consult with your vet to see if there is a reason for concern and talk to them about possible treatments or lifestyle changes you can use to help your cat.

It’s more important to love and care for your cat and to receive their love in return than it is to try and diagnose their behavior.

Why Do Cats Groom Each Other And Then Fight - The Reason
← Previous
Why Do Cats Tilt Their Heads - The Interesting Reason!
Next →

Useful information. Clear examples. But a bit too few details. And I would also like to compare the product to other similar ones as it's done on COMPACOM. It's always more convenient to make a choice of any service when you review various offers.