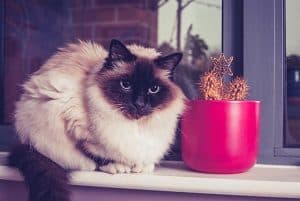 Often called the “Sacred Cat of Burma,” Birman cats have long been prized for their beauty. They are traditionally indoor cats. Since they’ll probably have the run of the house, you might be wondering if they’ll scratch your new couch.

So, do Birman cats scratch furniture? Yes, Birman cats can scratch furniture. Outdoor cats like to scratch trees with their claws. And as an indoor cat, the Birman is very likely to go for your furniture since there’s not a tree available. Your new couch is vulnerable to attack.

Knowing why your Birman wants to scratch your furniture is essential. It’s hard to stop inappropriate behavior without knowing the motivation behind it. This is a guide to not only knowing why scratching is happening but how to deter this sometimes-destructive behavior.

Why Does Your Birman Cat Scratch Furniture?

There are several reasons why cats scratch. They include:

Let’s first look at this in terms of human behavior. Some people go for manicures to have their nails trimmed. If a Birman could, it would go for a manicure too, but instead, it goes for your furniture.

They want to scrape or clean the dead outer layers off their claws. They do not scratch to sharpen their nails. This is an old wives’ tale. Cats don’t want their nails too long. When nails are too long, there’s a risk of one growing into a pad. This is definitely an ouch!

In other words, your Birman is staking your furniture as her own. The result of scratching the furniture is a visual mark. This is not a welcomed mark to you, but to a cat, it’s a sign of ownership. This mark is saying “stay out, private property” to any other cat that might come along.

All cats have scent glands on their paws. Your Birman is no exception. When a cat scratches the furniture, her scent is being transferred onto the furniture. This is just another way of establishing ownership.

Who doesn’t like a good, luxurious, stretch? Your Birman is no exception. It feels good to reach up and stretch their body. And why they’re at it, your cat can give her feet and claws a good stretch.

Birmans are a stocky cat and have the propensity to be overweight. They need to receive proper exercise. One way a cat can exercise is to reach upward. This helps build upper body strength. Think of it as cat Pilates.

You may have noticed that after you come home and your fur baby greets you, she heads for the couch. She’s not lying down; she’s reaching up and giving it a good scratch. That’s because she’s happy. And when a kitty is happy, they like to stretch. What better way than on your good furniture.

Should You Declaw A Birman Cat?

No…in fact, absolutely never declaw a cat. Declawing a cat is a form of mutilation. It’s a painful procedure. Why would you want to put your beloved Birman through it? It is equivalent to amputating the top part, down to the knuckle, of your finger. Many veterinarians refuse to perform the surgery. There are too many alternatives to stopping a cat from scratching the furniture than cutting part of their toes off.

How to Deter a Birman From Scratching Furniture

There are several techniques for stopping your cat from scratching furniture. It might take some trial and error and maybe some planning, but it’s doable. Below is a list:

This may seem like the obvious answer because it is the best answer. There are methods to effectively using scratching posts. For instance, don’t just stick one in the corner and expect your Birman to run over to it. You need to have more than one. Several scratching posts should be strategically placed around the house. Your kitty will want to stake her claim to them. She’ll likely scratch to mark them.

Rub a little catnip or honeysuckle onto the posts. Kitties love it. They’ll start by rubbing against it and progress to scratching it.

Remember, scratching posts are vital to deter inappropriate scratching. You can use the methods below, but if you don’t give your kitty an alternative to the furniture, it is all for nothing.

Go to the pantry and grab some Reynolds wrap. This may sound crazy, but cats don’t like the feel of it.

Attach the wrap around the areas on the furniture that your kitty is attracted to. It may look a little odd, but if you combine this with the scratching posts, you will be able to redirect your kitty. She’ll avoid the foil and head for the post.

Double-sided tape is a great way to stop the inappropriate scratching. It doesn’t hurt the furniture, but the tape will irritate your Birman. Don’t worry, it won’t hurt her, but nobody wants to stick to something. And if your cat scratches the tape, she will stick.

Depending on your cat, this may or may not be an easy way to cut down on scratching. Keep in mind when you trim that you don’t have to take off the whole nail. If you do this, you might splinter the claw or hurt her. Just clip the tips. That should dull the nails enough to cut down on any damage. If you are not comfortable with doing this, you can always take them to a groomer or veterinarian.

Who doesn’t like a good game of wand? It’s especially fun when there are some feathers at the end of the string. Play with your Birman. Get them going. Then when she’s enjoying herself, run or pull the string portion over the scratching post. She’ll bat and claw at it. The goal is for her to see how much more fun it is to claw the post rather than the couch. She’ll associate good times with the scratching post.

You might need to be observant for this one. Next time you see your kitty use the scratching post, encourage the behavior, and give her a treat as a reward. You want her always to think that good things happen at the scratching post.

Cover the vulnerable areas of your furniture with plastic covers. You don’t have to put plastic everywhere, just on the areas that your kitty is most attracted to. It will deter her because there’s nothing rough for her claws to grip. And after all, that’s the reason for scratching.

Pick your “no” noise. It could be a hiss, a loud no, or clapping the hands a certain way. But don’t say your Birman’s name while disciplining. Save saying her name for the good times.

A vinyl carpet runner might sound crazy for furniture, but it works. Purchase one of those cheap vinyl carpet runners that grandma used to have in her entryway. Then, turn it upside down. Attach it to your furniture with the smooth side against the furniture. The nubby side will be on the outside. Your Birman will not want to scratch it.

You love your Birman, but you don’t want the furniture shredded. There are ways to deter this behavior. With a little patience and a few scratching posts, you can have both a beautiful kitty and beautiful furniture.