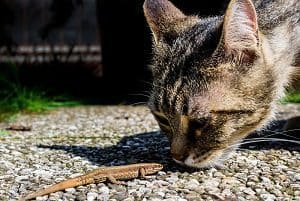 Cats love to hunt, so if they see a lizard running about, they will likely try and snatch it up. But do cats eat lizards?

Cats do eat lizards. Although usually safe, it is not recommended that your cat eats a lizard. Lizards can be poisonous to cats. Symptoms of toxicity include foaming at the mouth, vomiting, shakiness, and lack of responsiveness.

It will be your cat’s instinct to eat a lizard, so it’s essential to learn the risks. In this article we’ll dive into why eating a lizard is not always the best scenario for your cat. We’ll talk about what happens, and what you can do to protect your furry friend!

What Happens If A Cat Eats A Lizard

Cats are natural predators. They like to hunt and eat whatever is skittering about, including lizards. If a cat eats a lizard, it could be harmless, but it could also be dangerous. Some lizards are poisonous, or your cat could have trouble digesting the lizard.

Even if your cat is an indoor cat, lizards can still sneak into the house. Indoor cats are going to see a lizard as a fun new toy they can play with. Both indoor and outdoor cats are likely going to eat the lizard.

The best-case scenario is that the cat simply has a tasty snack. They eat the lizard and move on with their life.

There are two possible worst-case scenarios. First, the lizard could be poisonous. This could cause symptoms of toxicity. These include:

The other possible scenario is that your cat can ingest parasites that live on or in the lizard. These parasites can cause serious digestive issues in your pet.

These parasites are called liver fluke. They are most common in the United States and Hawaii. This takes between 8-12 weeks to mature, but in that time, it can travel to the gallbladder and liver. Eventually, it causes severe liver inflammation.

Do Cats Die After Eating Lizards

Unfortunately, there is a possibility that a cat can die after eating a lizard. It is not guaranteed safe for a cat to eat a lizard between potential toxicity of the lizard and the possible parasites that exist inside of the lizard.

If you notice your cat ate a lizard and is starting to show signs of illness, take them to the vet immediately. However, if they act normal and show no signs of being sick, it is safe to assume they are okay.

Can Cats Get Salmonella From Lizards

Liver fluke and toxicity are most common if your pet ate a lizard. Another possible ill effect is salmonella. A cat can get salmonella from eating a lizard.

Salmonella is a bacteria that can cause intestinal distress. However, it can also be stored in the bloodstream, depending on the severity or strain. Just like people, salmonella is contracted in cats by the consummation of raw foods.

It would be pretty odd to see a cat roasting a lizard before eating it, so this counts as a portion of raw food. Domesticated cats can be especially sensitive to raw foods because their diet mostly consists of kibble and wet food.

The following symptoms are signs of salmonella in a cat:

● Diarrhea with specks of blood

● Disinterest in food/lack of appetite

For the most part, cats can fight off salmonella. Even so, it is important to take them to the vet at any sign of illness. Thankfully, it is rare for a kitty to die of salmonella.

Can A Lizard Survive A Cat Bite

In most cases, it is lethal for a lizard to be bit, scratched, or played with by a cat.

If you choose to keep lizards, geckos, or other scaly friends as pets, it’s essential to keep them separated from your cat. Again, cats are natural-born hunters. A little creature is going to awake their innate desire to pounce!

Bites and scratches can be fatal for a lizard for several reasons. First, they heal slowly. These creatures need a lot of space and time before they are completely healed from a wound. Cats also can transfer diseases to the lizard. Finally, small animals can get stressed out easily. Stress can lead to other illnesses that result in death.

If you plan on keeping bigger reptiles in your home, it is even more important to separate them and your cat. It is not uncommon for interspecies fights to break out!

If your cat is attacking lizards outside, there is not much you can do about it. Just be sure you are keeping your pet safe. If your cat nicked a lizard or bit them, it is probable that they passed away shortly after.

Why Does My Cat Bring Me Live Lizards

Cats who have a well-balanced diet are probably hunting for fun. This gives them mental stimulation and exercise. If your cat is bringing home a ‘gift,’ such as a live lizard, they really love you!

Cats show their affection a bit differently than dogs or guinea pigs. They have a reputation for being independent and sometimes cold, but this isn’t necessarily true. Cats really love creatures; they simply have a unique way of showing it.

Cats show affection by protecting you and showing their appreciation by giving you food. The cat feels as if they need to contribute to the household in some way. They want to show you they appreciate your protection and want to return the favor.

They also might think you are simply a bad hunter. In this case, they want to help you out and teach you how to hunt.

Whatever the root cause, it is still a sign of love and affection. You should be honored that your cat loves you just as much as you love them! They just show it a little bit differently.

How Do I Stop My Cat From Bringing In Lizards

The best way to stop your cat from bringing you live (or dead) animals is to simply see it as a form of affection.

If you get mad at your cat or throw away the animal, they think they didn’t do good enough. All cats are perfectionists. It’s either go big or go home for these animals. So if you don’t appreciate their love, they’ll find something bigger and better for you.

Start by showing them you understand their gift. Give them a good pet and some kisses and allow them to walk away. At this point, you can dispose of the animal without your cat seeing.

Also, acknowledge their role as the protector of the house. Some cats want to show off their hunting skills and their ability to protect their loved ones. Again, this is a sign of love. Simply acknowledge it.

Another, and less frequent, reason is that they are not getting enough nutrients in their diet. If you think this might be the case for your cat, consult your vet. Make sure you are always feeding your cat a diet high in nutrients and giving plenty of playtime.

Cats should avoid eating lizards for the health and safety of the cat and the lizards. Lizards can be toxic to cats or transmit diseases. Liver fluke and salmonella are both common transmittable diseases from a lizard.

If your cat is bringing home live lizards, it’s because they love you. It might be a bit gross and frustrating, but it’s important to acknowledge their love. Once they feel appreciated, they will most likely start to find other ways to love you.