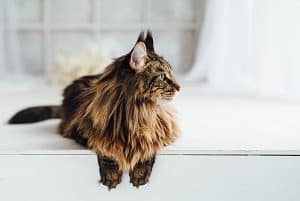 If big kitties are your thing, then you might want to take a look at a Maine Coon. Weighing in between eight and eighteen pounds; that’s a whole lot of cat for the legs to hold up. But how sturdy are these legs?

Do Main Coons have short Legs? No, a Maine Coon’s legs are no shorter than the average cat. The Maine Coon has medium-length legs.

The Maine Coon certainly has bulk. They are not only big-bodied, but they are consumed with fur galore. When you look at them, it appears like they are shorter than other cats. But what creates that optical illusion?

With a mop of fur, this kitty has the honor of being a native of the U.S. In fact; it’s the only long-haired breed with that distinction. Although it has many unique characteristics, its’ number one feature is that of long luxurious fur.

It’s long and shaggy, but not the same length everywhere on the body. It drapes lower on the stomach. The fur on the belly almost touches the ground. The coat is shorter on the shoulders, which accentuates the length of the tummy fur. With all that fur hanging down and blocking the limbs’ view, it gives the appearance of shorter legs. This is why most people think that Maine Coons are short-legged.

However, that’s not the case at all. Lifting up the hair you can see the true length of your cat’s legs. Besides, a cat breed this large needs proper support in order to function, get daily exercise, and live a healthy life.

While most Maine Coon cats are large in size, Maine Coons can actually be small too! Small versions of this cat weigh between 7 to 8 pounds. A normal-sized Maine Coon is usually twice the weight. Most fully matured cats in this family are not going to be any smaller than that, otherwise, there would be some serious health concerns on the horizon.

When Maine Coons are this small at a mature age, chances are they may be experience dwarfism. It’s not common to find this in this particular breed, but it does happen from time to time. It’s all about genetics, and this mutation can actually cause your cat to appear smaller and have shorter legs.

Characteristics that Distinguish a Maine Coon

A Maine Coon is quite the package. It really is a large cat. It has a little something for everyone and is very distinct in its appearance.

Some defined characteristics include:

Is My Maine Coon A Mix

Did My Cat Not Develop Correctly

Outside of your Maine Coon being mixed, there could have been some developmental issues with your cat at birth. Sometimes cats will end up with shorter features because of an imbalance or the bones not developing correctly. So in theory, any cat can have shorter legs, even if they are not normally supposed to. This has less to dow ith the breed and more to do with genetics and poor muscle development.

Cat Breeds that Have Short Legs

Unlike Maine Coons, several cat breeds legitimately have short legs. They are dwarf cats. Some of them are experimental, and most of them are not recognized by an association. These breeds include:

Short-legged cats have been reported from around the world since the 1940s. But the history of the Munchkin begins in the 1980s. It happened as a result of a genetic mutation. The breed was identified in the southern United States.

These cats are built like corgis or dachshunds. But unlike these canine breeds, the Munchkin doesn’t have spinal issues. That is because a feline has a flexible spine.

This is a controversial breed and is only recognized by one of the two cat associations. The TICA recognizes the Munchkin breed, but the CFA does not. As a result, the Munchkin can’t compete in CFA shows.

Although they have short legs, their appearance is like that of any American domestic short or long hair cat. They’re just a cat with short legs.

These cats are one of the rarest breeds in the world. They are still in the experimental stage. They are the combination of a Munchkin and a Selkirk Rex. The Selkirk Rex gives the Lambkin a curly coat…like a lamb. At the same time, the Munchkin passes on its short legs.

Because it is a dwarf breed, the Lambkin is susceptible to genetic problems such as:

Because of its curly coat, you’ll need to brush it daily.

The Lambkin is recognized with The Dwarf Cat Association (TDCA) and TICA.

This cat is a perpetual kitten. Although it’s big when it comes to ears and eyes. The Minskin is a mix of:

One recognizable trait of the Minskin is the tail. Its tail is longer than its body. Their coats come three ways. They include:

Hair points mean that some Minskins only have hair on their feet, ears, and tail. If you wind up with a hairless, you’ll need to give weekly baths.

The Minskin is currently being considered as an Advanced New Breed by TICA.

Interesting that a cat would be named after Napoleon. The short French leader had a fear of cats. But this beauty is nothing to be feared. They’re a ball of fluff. And they are considered one of the dwarf cat’s breeds.

They were developed by breeding a long-haired Persian with a Munchkin.

Besides the Persian’s long fur, the Napoleon inherited a propensity to have polycystic kidney disease. Polycystic kidney disease a condition where a kitten is born with multiple cysts in the kidneys. The cysts start small but can grow. If they grow large enough, they can disrupt kidney function and even cause kidney failure.

TICA’s board changed the Napoleon name to Minuet, and the organization recognizes it. The Cat Fanciers Federation recognizes the breed as Napoleon. However, this breed is not recognized by the CFA under either name.

This shorty is the weirdest of all the dwarf cats. Picture an alien cat head on a Dachshund’s body, and you might have an idea. Their name is a combination of dwarf and elf. The Dwelf only weighs four pounds. And they can act like a dog at times. This is truly a unique feline.

Although they appear hairless, and they practically are, they do have something. It’s basically like peach fuzz. But because they are still considered hairless, they will need to be bathed weekly. Keep them indoors; they sunburn easily.

The Dwelf is not without its health issues. They are prone to skeletal problems. They have been known to have lordosis. This is a curvature of the spine. They also have a propensity for pectus excavatum. This is when the breastbone is sunken into the chest. This can result in breathing and or heart issues.

Now that you know Maine Coons have medium-length legs, you don’t have to worry so much about them being short. Unless your Maine Coon is experiencing a unique situation like dwarfism or lack of proper nutrition, they will be a normal size all around.

Because of their large size, these big beauties don’t come cheap.

The average cost of a Maine Coon is a thousand dollars. But most owners would say, they’re worth every penny. When you adopt your baby, she will have already had her shots and vet exam. You don’t have to pay extra. Plus, if you’re purchasing from a reputable breeder, you have the satisfaction of knowing that your new kitty is healthy and a purebred.