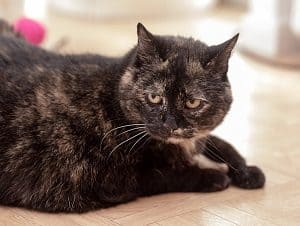 Even though tortoiseshell cats can get along with other cats, there are still some quirks in their personalities.

Yes, tortoiseshell cats are friendly. But like with any other cat, they have favorites and are choosey about who they show their affection to. Cats are notorious for being finicky and not treating every human the same. Torties are no different in this regard.

There is the nickname and alleged tortitude that follows this cat around. Owners and those partial to these cats will swear that any cat with tortie markings are far sassier than cats without these markings. There is no scientific proof of this increased attitude or any evidence of this alleged increase in attitude.

Female cats have a reputation for being sassier than their male counterparts. Just like with attitude linked to having tortoiseshell coloring, there is nothing scientific to back this up. This reputation is based more on anecdotal evidence.

As someone who just adopted their first female cat a couple of years ago, I can attest to the sexes having distinct personalities. My female cat loves in her own way, and I think she is sweet as can be. She likes to groom my face on occasion. But she isn’t as outwardly affectionate as my boy cat. And she is much more aggressive and a biter. FYI—she is not a tortie.

There does seem to be some scientific studies that back up the theory that tortie cats are more aggressive than some of their counterparts. According to a study from UC Davis, torties and calico cats seem to be more assertive and likely to challenge their humans. The study compared cats with these coats to cats with a single-colored coat. One thousand two hundred cat owners participated in the online survey.

The study had owners assess behaviors they witnessed in their cats like biting, hissing, etc. The results showed that owners described more of these aggressive behaviors in tortie and calico cats versus single-colored cats.

This study was the first of its kind, but it comes with some scientific limitations. The primary one being that owners had to self-report the behavior. This can lead to bias in the reporting. Further studies are warranted on this issue. There are plenty of other scientists who will say tortitude is in an owner’s head and not real.

Do Tortoiseshell Cats Have An Attitude

However, other than the study above, there is no substantial evidence that tortoiseshell cats have more attitude than non-tortoiseshell cats. Their owners lovingly refer to them as the “divas” of the cat world and state they are strong-willed. But nothing in research backs this up. Owners may think their torties have extra attitude when it’s equal to normal catitude.

Tortoiseshell cats have a reputation for being very feisty. As we have covered, that may be more fiction than fact.

Owners of torties insist that these cats are feistier than other domestic cats. However, they also insist a tortie is exceptionally loyal and protective of their owners as well.

What some may not realize is that tortoiseshell refers to the color of the coat. It isn’t a breed of cat. Personality traits of a tortoiseshell cat will vary slightly based on breed. A Persian tortie will exhibit traits of that breed the same way a Devon Rex tortie will show the characteristics of their breed. These are not likely to be the same traits.

There is no set answer to the question of when cats will get used to each other. Some cats learn to tolerate their housemate eventually but are never friends with their housemates. Some cats, on the other hand, will never accept a new cat into their household.

Integrating cats take time. Until they are comfortable with each other, they need to stay in different parts of your home. To help them learn each other’s scent, swap out blankets, and other personal items. Let them view each other with a barrier in place like through a baby gate.

I got fortunate when I brought my last cat into my home. She lived in the bathroom for a couple of weeks, and my current cat could smell her and play with her paws under the door. I also would do room swaps and let them hang out in each other’s living quarters for 15-20 minutes at a time. Within two weeks, they were ready to go.

My experience is not the rule. Some cats take months to integrate. A true friendship can take as long as a year to form between two felines. Make sure you don’t rush it because that is when disaster will strike.

Do Cats Get Jealous Of Other Cats

Yes! Cats may not be human, but they most certainly have emotions. They can be happy, sad, and yes—jealous. This emotion can lead a cat to bite, scratch, and start destroying things. Your cat could also become aggressive towards their human, crowd your space, or even leave the room when you or the new pet are in it.

Experts disagree if cats feel jealousy the same way as humans do. It could be that cats feel more territorial of their possessions, and that can trigger their outbursts. If a new pet comes in and tries to play with your cat’s food and toys, there could be retaliation and a reaction based on that. It may not be traditional jealousy as humans think of it.

To get an immediate handle on the situation, separate your two cats. They may need to live apart for an undetermined amount of time. Some pet owners start the integration process over from the beginning to bring harmony to the household.

It is incredibly likely that your cats will fight during their lifetime together, the same way a human will get in a tiff with their roommate. But constant aggression is not good. Neither is having one cat bully the other regularly.

If you have a cat who is being a bully, use diversions and other tools to break up the fight. Make sure to tell the bully cat “NO,” so they know what they did was wrong. Make sure the bullied cat has a safe place to hide from the aggressor. If these techniques don’t work, calming collars or diffusers are other options. Speaking to a vet who is a behavioral expert is also a step pet parents can take.

Whatever steps you take, don’t physically become involved in the fight yourself. And don’t hit the bully cat. Both of these actions will get you attacked. Cat bites and scratches necessitate a trip to the emergency room to avoid infection.

While tortoiseshell cats get a reputation for having more attitude than most cats, there isn’t much science to back that up. One study from scientists showed that owners perceive their torties that way, but their viewpoints could be clouded. These cats don’t seem to be any more or less aggressive than any other coat of cat.

If you have cats that are having trouble living together in your home, consider reintroducing them to each other to see if this will help them live in harmony. Not every cat will get along perfectly, so don’t set the bar too high. Not all cats will be friends. But if you have a cat that is bullying a housemate, that is something you need to get under control. That will benefit everyone in your house, including you!

link to Do Cats Like Air Conditioning - Things To Consider

Continue Reading
link to Do Cats Like Cedar - What You Should Know!

If you’ve ever been around a cedar tree with your cat, you might have noticed that your cat tries to avoid it at all costs. Your cat doesn’t have the same draw as other kinds of trees that your...