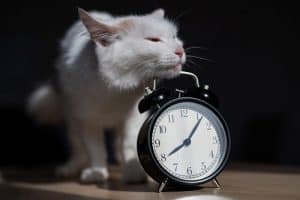 Most pet owners have had their cats wake them up with an urgent reminder of breakfast at least once. Or maybe it isn’t breakfast, but your cat seems to know exactly when it’s time to go snuggle in bed and get some rest. It makes perfect sense to wonder if your cat knows what time it is when they wake you up five minutes before your alarm or waits to greet you at the door when you get home. So how do cats know what time it is?

Of course, cats can use the same habit-based time sense to adapt to life as a domestic pet. In this article, we’ll share how cats perceive time and other factors to consider.

Do Cats Have A Perception Of Time

Yes, cats have a perception of time, but the basis for their time sense varies depending on where they live and how. A cat that lives in the wild might base its perception of time off its circadian rhythm, the sun, environmental temperature, and other cues from nature.

Your cats might have to base their time sense off other cues in your home since there isn’t as much variation in your environment indoors. That doesn’t mean that your cat doesn’t notice time passing, just that they probably have a unique time sense based on your home environment and influenced by their natural circadian rhythm.

However, since cat behavior can be particularly challenging for the experts to work out, we don’t know a ton about how domesticated cats track time or what their perception of time looks like.

Do Cats Have A Sense Of Time Passing

It’s clear that cats have a sense of time, but do they notice time passing through the day? The truth is that it’s hard to say since we can’t get inside your pet’s head to see exactly what they are thinking. However, we know that cats perceive time, which means that they will likely also know when time is passing.

That doesn’t mean that your cat thinks about time in terms of seconds, minutes, and hours. Your cat might not even think of time in days, though it would make some sense if they did, thanks to the natural cycle of day and night.

Instead, your cat might imagine time as the intervals between meals, the length of time they sleep during an average nap, or the time they use to play with their favorite toy. Your cat likely thinks about time in terms of your schedule too.

After all, you’re one of the most important influences on your cat’s life. Your sleep schedule, work schedule, and the times you feed your cat are all important moments in their day. So your cat probably knows your schedule and when to expect the next part of the routine.

Does Time Pass Slower For Cats

Yes, time passes slower for cats than it does for people. Or, at least, science thinks that time passes more slowly for cats. While there are relatively few studies on feline time perception specifically, the time sense among animals more generally has been studied. The scientists discovered that larger animals typically have a faster time sense, meaning time passes more quickly for them, while smaller animals usually have a slower time sense.

That means that most smaller animals probably experience time more slowly, meaning that a second or a minute seems longer to smaller animals than it does to us. Since your cats are significantly smaller than you are, they also experience time on this slower scale. Every day seems longer to them than it does to you, and the intervals between different activities seem longer.

Don’t worry, though; that doesn’t mean that your cat is waiting an achingly long time for you to get home every day. Your cats can entertain themselves just fine when you’re gone as long as you’ve given them plenty of toys and enrichment items.

Do Cats Have A Sense Of Time When You Leave Them

Cats do have a sense of time when you leave them, and this behavior is built through repetition. Even though your cat’s time sense is likely based partially on your activities, that doesn’t mean that their perception of time disappears when you’re away. Instead, there are likely other cues that your cat looks for to tell them what time it is when you’re gone.

That may be part of why most cats like to spend time in windows, cattios, or outdoors. The sunlight and other outdoor cues naturally tell your cat what time of day it is and helps them keep track of time.

Of course, the exact cues your cat uses when you’re gone aren’t entirely clear. They might even use the same time cues as you. If you have a clock with an audible chime, for instance, they might know that the chime tracks the passage of time. If you leave the TV on or another sound for your cat, that sound might help them track time as well.

Don’t worry too much, though. Even if you don’t leave anything that could help your cat track time, they’ll still keep track of time while you’re gone.

Do Cats Know How Long You Are Gone

Your cat does know how long you’re gone when you leave, but probably not in the terms you’re used to. They aren’t going to think about the minutes or hours you’re gone. Instead, your cat is going to think about the number of mealtimes you’ve been gone, how long they’ve slept, the cycle of the sun, and other natural factors that tell them the time.

If you’re gone for too long, your cat may worry that you aren’t coming back, which can explain why cats are so excited to see you after you’ve left for a vacation or taken them to a friend’s house for a few days. Your cat remembers you, but the change in their routine adds uncertainty and makes it harder for them to anticipate what’s coming next.

Of course, your cat isn’t dependent on your schedule for their sleep. If you’re up too late for your cat, they’ll probably go to bed without you.

Do Cats Know What Day Of The Week It Is

It’s hard to know for sure if cats track the day of the week. We know that cats don’t care whether it’s Monday or Friday, but some cats seem to learn the difference between weekdays and weekends. The tricky part is we can’t always tell if a cat knows what day it is because they have learned your schedule and can tell weekdays from weekends, or if some part of your routine tells them what to expect on certain days.

Most likely, your cat can’t tell the days of the week apart. Instead, they are probably changing their behavior to match whichever routine you’ve set up for the day.

Like most animals, cats are creatures of habit. They are most comfortable in familiar spaces and with familiar routines. While you don’t need to match your day to their needs exactly, a routine that follows approximate times will help keep your cat more comfortable.

Giving your cat some access to sunlight can also help them keep a more regular schedule. Cats tend to be most active around dusk in the wild, but indoors the sun can act as a more consistent marker of time, even if that isn’t their most active time.

Don’t feel too bad about leaving your cat alone at home, either. While they probably miss you and miss the routines you established, your cats can find plenty to do independently. As long as their needs are taken care of while you’re gone, your cats will be happy to see you when you get back.

Though, if your cats are anything like ours, they’ll be happy to see you and then immediately act angry that you left them alone in the first place. They’ll forgive you eventually, so it’s best just to let your cats get it out.

If you have to spend a lot of time away from your pets, it’s important to make sure they are getting some of your attention and time when you’re home. Cats can be independent, so they likely won’t try to spend time with someone who doesn’t want to spend time with them. Taking a little time out of your day to play with your cat or give them love and attention is the best way to keep your bond strong.