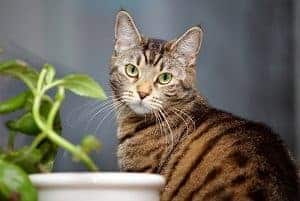 When it comes to owning a tabby cat there is a lot to be explored. These cats carry a great deal of history with them from their origins to folktales and ancient myths. As with any pet, there are always going to be some facts that incorrect information that gets blurred together.

The reason for this comes down to the genetic makeup of orange tabby cats. How the genetics work is actually really simple for the male cats which is why we tend to see more of them. Male cats have XY chromosomes, so they only need one orange gene to produce that color. Female cats have two XX chromosomes, and so they need both the mother and father to produce the orange gene.

Female cats are generally more protective and at times can seem less affectionate than male cats. In general, male cats are more tolerant when it comes to being handled and interacted with. Male cats also do quite well with embracing new cats who are added to the family.

Things that actually control the affection of any cat include:

Orange tabby cats are quite friendly, but not necessarily more friendly than other types of cats. The coat color of a cat has very little to do with whether they are friendly or not. Much like the comparison of male cats to female cats, it all depends on the factors surrounding their upbringing and breed. The reality is that some breeds want little to nothing to do with being affectionate or handled.

Each cat has its own unique personality, so it’s impossible to generalize them based on coat pattern and fur color alone. Still, there are some cat breeds that are known for being more affectionate and friendly than others. Here’s a list of some of the most affectionate cat breeds.

If you’re looking to have a more affectionate and friendly cat, you should try to make that impression on them in their youth. Cats have a very good memory and are able to digest and grow with information over time. The life experiences they have and what they are exposed to socially has a lot to do with the kind of temperament they’ll have as they age.

There are certain cat coat colors that are seen less frequently than others. You might even call them rare. Chocolate, Smoke, and Cream are some of the rarest coat colors you can find on a cat. The chocolate coat is unique because it’s a mutation of the black color gene. Similar to how the orange coat works, the black is watered down into this unique chocolate color. It’s really only present in a few cat breeds such as the Havana Brown cat. Birman, Abyssinian, Cornish Rex, and Persian.

Smoke colored cats can be found in many breeds such as the Oriental Shorthair, Turkish Angora, and Cornish Rex. This coat is easy to spot because the cat will have a bit of silver shine to their coat. It’s a color that’s present in longhair and shorthair tabby cats. Cream cat colors are when the red/orange color gene is diluted. Birman and Oriental Shorthairs are known to carry this color. The color comes across as a yellow or beige tint.

While many of these coat colors occur as solids in most cats, they can feature traces of the tabby pattern in there. That can include stripes, spots, and blotches. In these cases, the colors are seen specifically in the patterns themselves rather than on the main area of the cat’s coat.

While most people suggest that tabby cats only feature four different patterns, they actually have five. Below is a list of the five tabby cat patterns including the one most cat lovers tend to miss.

The Classic tabby pattern looks almost like a tub of mixed icecream. The patterns on the cat are in various swirls, some bigger or smaller than others. Think of it as a marble cake! People tend to refer to this as the blotched tabby because of the varying sizes and differences in the swirl patterns. Blotched tabby cats have mutations in their genes which is what helps distinguish them from tabbies with simple striped patterns.

Mackerel tabby cats are sometimes referred to as tiger cats. They feature long thin stripes that cover the entire body. The stripes typically run vertically down each side of the cats back and stomach area.  It closely resembles a fish skeleton which is how the name Mackerel is associated with these cats.

The stripes also go up to the head of the tabby cat just before their iconic M forehead marking. It also covers the ears and the tail. Like most tabby cats, there is a thick stripe that runs down the center of their back. For the most part, the stripes are evenly spaced although depending on the genes of the cat, some markings can be larger than others.

Spotted tabby cats have small and large spots across their entire body. It’s a modified version of the Mackerel tabby, but with spots instead of swirls.

Next is the Ticked tabby which is seen most often in Abyssinian cats. This tabby cat doesn’t appear with the normal spots and stripes found on the body and tail. Their torso nor their neck or leg areas have stripes either. They are much harder to recognize because the pattern is simply more difficult to see. The individual hairs on their bodies are ticked instead.

This means the agouti hairs have patterned stripes on the strand itself rather than spread across the body as a unit. Ticked tabby cats can be identified in other ways though. They still have some of the same facial markings and also the M marking on the forehead. Ticked patterns are more easily seen on cats with lighter coat colors. The lighting in the room can also make the small markings more visible.

Patched tabby cats are sometimes confused with agouti cats, but they are a bit different. Instead of having marks all over the body, they are simply found in specific locations. The tail, legs, and neck area have ticked with small stripe patterns. The markings can also be small patches and blotches. All combinations of the other marking patterns can be present in one cat. Patched tabby cats can also feature different color modifiers and patterns within the same location.

When it comes to spaying cats, the whole point is to calm them down. Usually, if the male or female is not spayed, they will become frustrated while in heat. While the process works well for female cats, it tends to work much better for male cats. Male spayed cats are indeed much calmer than female cats.

Neutered male cats tend to be more snuggly and affectionate. Their concentration is less focused on the female cat and now more on their owner. To a degree, male cats can become quite clingy to certain objects and individuals.

When female cats are spayed, it takes them a bit longer to return to normal. They have to take time to process their hormones and sometimes that can lead to redirected aggression.

7. Tabby Cats Can Come In Any Coat Color (FACT)

Did you know that tabby cats can come in just about any coat color? The tabby gene is one of the most prominent genes. Almost every cat has some trace of it, and depending on their genetics, the markings may or may not appear. Even in the rarer coat colors like Smoke, Chocolate, and Cream, the tabby gene can still be present. Even bi-color coats can feature the tabby pattern. It’s not uncommon to find Mackerel tabby cats with a dark color contrasting with white.  Tabby is not actually a cat breed, so it has no bearing on what coat color the cat will have.

8. All Tabby Cats Have Stripes (MYTH)

Most domestic house cats have the tabby pattern. While the overwhelming majority of tabby cats feature some sort of stripe pattern, not all tabby cats have stripes. Remember that tabby cats can feature all kinds of unique patterns. Most of them you can clearly see with stripes, swirls, blotches, and patches and spots. Then there is the ticked pattern which is much tougher to point out depending on the overall coat color of the cat.

9. The M on A Tabbys Forehead Is In Their DNA (FACT)

One of the most distinctive markings on a tabby cat coat is the M on their forehead.

There are a few ancient stories and myths surrounding the M marking on the tabby cats forehead. One such story references the ancient Egyptians while another tells a story about a cat jumping into the manger. In the Egyptian period, cats were called Mau, and so the M is said to have come from this. In the biblical story, it is said that Mary gave the marking to the tabby cat who jumped into the manger. Other stories reference the Prophet Mohammed and how he prayed with a cat around him.

While those stories are entertaining, more scientific proof of the forehead M has been linked to the cats unique DNA. It’s a natural gene in all tabby cats although there is not a great explanation for its origins still to this day.

10. Tabby Cats Can Be Left Or Right Pawed (FACT)

Much like humans do with their hands, tabby cats have a paw preference.

Some interesting studies have been done to show paw preference in cats. Researchers have actually found that 39% of all cats prefer to use their right paw. The study also finds that 28.3 percent prefer their left paw; mostly male cats. Other studies have also shown a closer balance in the numbers with most still preferring their right paws. There are of course cats who are ambidextrous and don’t have a paw preference at all. The preferences really come down to the brain structure of each gender.

Any easy way to tell if your cat is left or right-pawed is to see which paw they put forward first. Observe your cat walking towards you and look closely to see how they begin their movement. You can also toss a toy to your cat and see which paw they reach with first.