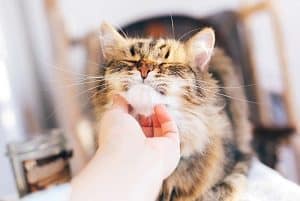 Playing with your cat is fun, but every now and then your kitty may get aggressive and bite you. Even worse is a cat scratch. We’ve all been scratched before, but for some reason, cat scratches seem to be more irritable than other types of scratch. So, why do cat scratches itch?

These are natural reactions and will happen regardless of what species does the scratching. Being scratched by a cat increases the itching sensations because cats can have bacteria in their claws. In some cases, bacteria can lead to a severe infection. Let’s look at what to do if you get scratched by a cat and how to recognize the difference between a minor irritation from a scratch and an infection.

How Do You Treat A Cat Scratch?

If you have owned cats for as long as I have, you will get scratched at some point. If you work in an animal rescue or at a vet’s office, you will not be able to avoid the talons of a feline. A scratch can happen as an accident or because your cat is annoyed with you. For example, if you want to scratch your cat’s belly and they don’t enjoy that, expect a smack with their paw. Attempting to scratch is also a response to fear for cats.

More often than not, a cat scratch is not a big deal. To treat the scratch, immediately wash the area and treat it with an antibiotic ointment. The antibiotic will cut down on the itching you feel. You may need to apply a band-aid or a gauze covering to stem any bleeding.

If your scratch is more profound and the bleeding won’t stop, you will need to seek medical care for the scratch. You may need stitches if the wound is deep. When this happens, the risk of infection is very high. More often than not, your doctor will either inject you with antibiotics or write you a prescription for one. Don’t skip this step of the treatment! A deep cat scratch will swell, and you will want the antibiotics to fight it.

Can A Cat’s Scratch Make You Sick?

In some cases, a cat scratch can make a person incredibly ill. There is a rare condition called “cat scratch fever” or cat scratch disease. In CSD, your scratch doesn’t heal; it continues to swell and may produce sores. The disease is caused by a bacteria (Bartonella henselae) that is passed from the cat when they bite or scratch you hard enough to break the skin. It can also be passed if they lick an open wound on you.

Even when you take precautions, you should be on the lookout for signs of the disease. Symptoms of CSD can include exhaustion, fever, loss of appetite, swollen lymph nodes, headache, swelling, and redness near the scratch, sores/lesions/pus near the scratch. If you notice you are having any of those symptoms, go to your doctor asap. Any symptoms would appear in 1-3 weeks after the incident occurred.

There is no test per se for CSD. Doctors diagnosis it by a visual examination. Not every doctor may feel the need to prescribe antibiotics, but a prescription does help resolve the symptoms faster. If you have other health issues or are immuno-compromised, cat scratch disease could be more difficult for you to overcome. Where the cat scratched, you can also factor into the decision for a prescription or not.

What Causes The Bacteria In A Cat’s Claws?

For an indoor cat, the source of bacteria is their litter box. Think about what cats leave in their litter boxes. No matter how well they clean their feet, some of that will still remain around their claws.

Any bacteria from their box ends up in any scratch they deliver. If your cat is indoor/outdoor, he or she can pick up bacteria from anything they step on/in. Once again, cats are incredibly clean animals. But no matter what, there will still be some specks left behind. If there were germs and bacteria in the things they stepped in, that is now around their claws.

The bacteria that causes CSD is a bit different. A flea bite typically causes bacteria. Cats can get the bacteria stuck in their claws by scratching at fleas, running their claws across flea droppings, or having their paws come in contact with any flea dirt.

The bacteria are also in their saliva, so they can get it on their claws by merely scratching themselves after bathing. 40% of cats can carry the CSD, causing bacteria at some point in their lives. The B. henselae bacteria can make cats ill as well, but most will pass the bacteria through their systems with no difficulty. It is more common in kittens or cats that have suffered flea infestations.

There is no reason to screen your cats for this bacteria or pre-treat with antibiotics as a preventative measure. CSD is extremely rare. Use good judgment when playing with your cats or handling cats that are agitated or feral. If you suffer from a scratch, clean it right away, and seek treatment if you need stitches.

Can You Be Allergic To A Cat’s Scratch?

If you already have an allergy to cats, you will react to scratches as well. A person allergic to cats will react to scratches, bites, as well as licks & kitty kisses. A person with a cat allergy can have an outsized reaction to a scratch, including profuse swelling and redness at the site. People with severe allergies can have a response on par with a severe food allergy. Those people can require immediate medical attention.

How Can I Avoid Being Scratched By My Cat?

This can be a challenge as a cat owner. Anyone with a feline can tell you that you don’t always know what is going to upset your cat and set them off. That unpredictability can lead to a cat owner taking a scratch or two.

But to decrease your chances of getting scratched, one of the biggest things you can do is to avoid doing things that you know upset your cat. If your feline doesn’t like belly rubs and claws you when you rub him or her, stop doing that. If you let your cat wrestle with your arm, you will get scratched. If you tease your cat with your hands or fingers, you’re opening yourself up to injury.

If your cat is upset, you should avoid touching them until they have calmed down. If this isn’t possible (or you work with animals in a rescue or veterinary setting), make sure you take proper precautions. Wear long sleeves and thick gloves to protect yourself from the upset feline.

Even if you don’t encourage the behavior until they know better, some felines have a tendency to scratch. When your cat tries to play with your hand, redirect him/her to a toy instead. This will help break this habit, leaving you relatively scratch-free.

It is tough to avoid being scratched by your cat. It can happen by accident or as a defense mechanism if your cat feels scared or provoked. Most of the time, all you need to do is wash the area and apply an ointment, and everything will be fine.

This will cut down on the relentless itching that can happen after a cat scratch. However, sometimes the scratch is quite deep, and you will need additional medical attention. And in rare cases, you could develop an infection known as cat scratch disease, aka “cat scratch fever.”

To make a full recovery, visit your doctor for a checkup and an antibiotics prescription. If you have a cat allergy, you can also have a severe reaction to a cat scratch that may need medical intervention. To avoid the wrath of your cat’s claws: