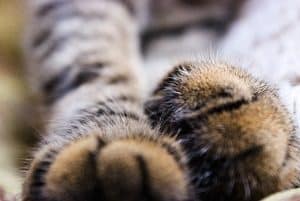 Your cat, as usual, cuts in front of you while you’re walking down the hallway. You notice that your cat starts shaking its paw, but you’re not too sure why. You don’t think your cat had the chance to hurt itself, but you’re still not sure why it’s happening. So, why do cats shake their paws?

Cat shake their paws if they are sore, wet, or have something stuck in them. Paw shaking can also be a result of declawing issues, muscle spasms, or injuries.

Paw shaking doesn’t always mean something terrible has happened to your cat. Your cat may be hurt after a high jump or after declawing, but most of the time, your cat may be shaking its paw because litter or tape may be stuck to its paw. Since there are many reasons for paw shaking, let’s talk a little more about its means and why it happens.

What Does It Mean When A Cat Shakes Its Paw

A cat shaking its paw has various reasons that can include a hurt paw, something on its paw, or memories from being a kitten.

If you’re new to cat ownership, seeing your cat shake its paw might be concerning. You might think something is wrong immediately, but that isn’t the only reason why a cat may shake its paw.

An injury is one reason that your cat may shake its paw, but the reason can also be as simple as feeling like something is stuck to the bottom of its paw.

Don’t start worrying when you see your cat shake its paw, but if different symptoms go along with it, it is a reason for concern. Otherwise, it is okay to write shaking paws off a weird habit of your cat.

Why Do Cats Flick Their Paws

You may notice that your cat flicks its paw if it has something stuck on its paw or its paw is wet.

If you notice your cat walking around while shaking its paw, there are plenty of reasons why your cat may be doing so, but if the movement has some jerk to it, then your cat may be trying to flick off water or something that got stuck to its paw.

Your cat may have just finished drinking and got some water on its paw pad. Maybe you were opening a box and dropped some of the tape on the ground that your cat stepped on. To get either water or tape off, your cat’s instinct is to shake its foot.

One of the most common reasons why your cat shakes its paw is because cat litter is stuck to its paw. If you realize that this is a common occurrence, you should think about changing the type of cat litter you use. It might take a few changes to find a litter that works for you and your cat, but it will be worth it!

In these cases, there’s no reason to worry about your cat. They’re just trying to shake off something annoying.

Why Do Cats Shake Their Paws When Drinking

When cats move their paws while drinking, it means that they are reminded of what it was like to milk their mother as kittens.

One of the oddest habits that my cat has is that she shakes her paws and scratching the floor as she drinks. I did a little digging on my own about this strange habit. I learned that my cat does this because she is reminded of drinking from her mother as a kitten.

This commonly happens to cats who were removed from their mothers too young, though it can happen to cats of any age as well.

Why Do Cats Shake Their Paws Before Going Outside

Your cat may shake its paws before going outside if your cat feels like something is on its paw.

Your cat can shake its paw at any point, but sometimes you may notice it before your cat goes outside. This may be an effort to shake something off its foot, like clumps of cat litter from the litter box.

If your cat steps outside without knowing it is raining or snowing, your cat may shake off the water that it feels on its foot. Even feeling the heat of the deck may cause your cat to shake off the feeling of the heat.

You might think your cat would only shake its feet when coming inside, but it can happen when they go outside too.

Why Do Cats Shake Their Paws After Jumping

Your cat shaking its paw after jumping may mean that it hurt its paw. There is a chance that the injury is serious, but generally, they may have landed on their feet wrong.

Any cat owner knows that cats jump a lot. There’s an old saying that cats always land on their feet, but that doesn’t mean that the landing doesn’t have the chance to be painful.

If your cat shook its paw and had been limping for a while, it is a good idea to get in contact with your vet.

Why Do Cats Shake Their Paws After Declawing

Paw shaking is typical after declawing because your cat’s feet are sore after the surgery.

Declawing is major surgery for your cat, and since it removes a portion of your cat’s knuckle, your cat may be sore for a few days or weeks after the surgery. Discomfort may be accompanied by paw shaking. It is your cat’s way of trying to take the pain away.

If you notice that your cat is still shaking its paws more than two weeks after surgery, you will want to reach out to your vet because something more serious may be wrong.

If you’re worried about your cat being in pain after declawing, make sure to read up on what it means to declaw your cat before deciding to go through with the surgery. Declawing seems like a great option to avoid ripped up furniture, but more goes into it than merely removing the nails. Being well informed will mean that you make the best decision for your cat.

Why Do Cats Shake Their Back Paws

If you’re anything like me, it might seem more obvious when your cat shakes its back paws. Something could be stuck to its back paw, or your cat might have hurt its back paw while jumping from a counter or table.

There’s no reason to worry more if your cat is shaking its back paw rather than its front paw. As I said, it may just seem more apparent when a cat shakes its back paws.

Paw shaking happens for a variety of reasons. Some of those reasons may be serious, but for the most part, none of those reasons are any cause for concern. Some cats may shake their paws more than others, but if you notice any other weird habits accompany paw shaking, then you should speak to your vet. Otherwise, chalk it up as a strange habit that your cat does.