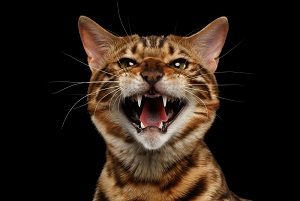 Like humans, cats come with all types of personalities. Some are quiet and calm, while others are spunky and rambunctious; a cat’s personality usually depends on their breed. Bengal cats, being descendants of the Asian Leopard wildcat, always showcase a wilder temperament. They’re energetic, loud, and agile and sometimes attack their owners. So, why does your Bengal cat attack you?

Your Bengal cat’s likely attacking you by accident; they don’t understand that their play-biting and scratching can hurt you. As they are high-energy, Bengal cats engage in frequent, intense play. They can also attack if they feel uncomfortable or fearful within the confines of the home. Focus on socializing and training your Bengal cat early to prevent this behavior.

Of course, there’s a chance that your cat is attacking you because they feel uncomfortable or fearful within your home. Although sometimes, the solution may make your cat feel safer, cat owners should focus on socializing and training their cat as early as possible.

A biting and scratching Bengal can seem quite aggressive at first, even if they’re playing. When a muscular, wild-looking cat comes running at you, it’s naturally very intimidating.

However, Bengal cats are not as aggressive as they may seem. They’re not any more aggressive than your average house cat. Bengals are known to be sweet, loving creatures.

As a breed, Bengal cats need vigorous exercise and frequent human interaction. As they are usually friendly, social, and playful, they’ll want to play with you how they play with other cats—claws and all.

After I adopted my second cat, I had a difficult time distinguishing playing versus fighting. Whenever my cats would chase each other around, bite each other’s ears, and scratch at each other’s noses, I couldn’t help but wonder if they were in attack mode.

The answer was: they were in attack mode, but it was all for fun. Cats imitate the “chase” and prey bite when playing, so it naturally looks a little threatening.

Bengals, especially, need to play and imitate the hunt to meet their emotional and physical needs. If your Bengal cat doesn’t have a furry playmate, you can use toys to diverge your cat’s clawing and biting away from your skin.

One question pet lovers have is whether Bengal cats are vicious. Bengal cats are sometimes thought to be vicious, but they actually are quite the opposite. These animals are extremely affectionate, although they do have some wild tendencies. The misconception with their aggression is tied to their history and origin.

Just like other cat breeds, Bengal cats are territorial. Invading their space in an aggressive manner might actually spark them to be aggressive toward you. However, approaching them with kindness and in a gentle manner will result in them giving you the same kind of treatment back.

Don’t be fooled by their unique coat patterns, pointed ears, and agile nature. They are very much a cat breed you can trust to show love and affection. With a highly intelligent temperament, they are one of the best cats around.

At What Age Do Bengal Cats Calm Down

Being wild and high-energy cats, Bengal cats are almost always leaping and running around. Bengal kittens are especially rambunctious; like other cats, they begin to calm down around one year old.

All cats tend to mellow out between ages one and four; by four years old, they are noticeably calmer than their kitten years. Kitten behavior, like chasing tails, shadows, or biting feet, should mostly disappear by age four.

You can expect your Bengal cat to be energetic for most of its life. It will likely be rowdier than the average house cat, but as long as you provide it adequate playtime and exercise, its energy is easy to control.

Can Spaying A Cat Cause Aggression

When a cat is spayed, the behavior normally won’t change for a few weeks. Between the first one to two months, you can expect your cat to continue on with their behavior, and then calm down.

Spaying doesn’t always work though. There are times when spaying makes absolutely no difference in your cat’s behavior. Younger cats under age 3 tend to continue their behavior after being spayed.

How Do You Stop Bengal Cats From Attacking

Biting and scratching, while fun for the cat, is a whole other story for the owner. Most cat owners have shown up to work or school with gnarly cat scratches; sometimes, it’s not something you can control.

If your cat’s in hunt and play mode, make sure to cover up. A long-sleeve, jacket, and pants (if it’s not too hot) acts as a necessary first line of defense against those sharp claws.

It would be best if you didn’t prevent your cat from using their claws or teeth during play, as long as they’re not using them. If you’re letting your cat play-bite you, there’s a chance they could develop to become hostile towards you or others.

Direct your cat’s attention away from your body and toward a soft, eye-catching toy that they can bite or sink their claws into.

If your cat is being downright aggressive and is no longer playing, you must take immediate action to de-escalate the situation.

Hissing, growling, swatting, trying to make themselves look more prominent, ears pointed back, and baring teeth are all clear signs of aggression.

If your cat becomes hostile towards you or another human, leave it alone. Either a social or medical issue is prompting it to act this way, so contact your vet. In the case of social issues, an older cat’s behavior is much more challenging to correct than a younger cat’s behavior.

How To Discipline A Bengal Cat

Part of disciplining a Bengal cat is beginning to socialize it during kittenhood. Being young and malleable, Bengal kittens quickly learn how to play according to their owner’s liking.

Never use force or pain to discipline your cat. When it comes to playing, the only discipline you should be enforcing is through re-directive strategies. Redirect your Bengal’s play away from you in a calm and strategic manner (ex. from hand to stuffed animal).

Yelling, hitting, or holding your cat against its will all leave permanent damage on your cat’s psyche; I’ve learned this the hard way. One night, my 9-month-old kitten was running around the house at 3 am because a) I hadn’t played with her enough that day, and b) she didn’t have enough companionship (we hadn’t gotten our second cat yet).

Tired and frustrated, I chased her down in a corner, which took about 5 minutes (she’s fast). By the time I had her cornered, she was cowering on the floor with wet eyes, blinking slowly. Although I had only cornered her to crouch in front of her and calm her down, my chasing had seemed incredibly vicious and downright terrifying to her.

It’s easy to tackle your cat’s aggression or bad behavior in a calm and composed manner. Don’t let your frustration take over!

If your Bengal’s attacking you during play, keep in mind that its utterly natural behavior can be adjusted. While Bengal cats may not be your classic, mellow Ragdoll, they are easy to engage with once you know how to navigate their playtime.

Do Bengal Cats Get Along With Other Cats? | Bengal Cat Republic

[…] It is easy to mistake a bengal cat’s playful nature for aggression since bengal cats will often scratch and pounce on other objects, cats, and feet. […]