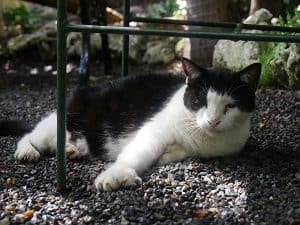 You may be wondering what’s up with those cute kitties that look like they’re wearing mittens. They are, in fact, polydactyl cats! That means they have more than the usual number of toes on one or more paws. They’ve also been referred to as Hemingway cats. But, are polydactyl cats rare?

Polydactyl cats are not rare. The gene is common and not related to the gender of your cat. One parent cat must have the gene. They do not have severe health problems and are quite expensive.

You might be wondering more about polydactyl cats, so in this article, I’ll share with you some of the many facts I’ve discovered about them, including just how rare they are, costs, and much more!

What Percentage Of Cats Are Polydactyl

Surprisingly, the polydactyl gene is somewhat common. It is an autosomal dominant trait, meaning it’s unrelated to gender. For a polydactyl cat to be born, one or more of the parents must have the gene.

If one parent has extra toes, there is a 50 percent chance the kitten will have it as well. Suppose both have the gene, the likelihood of all the kittens being polydactyl increases. That being said, having a cat born with extra toes on all four paws is an infrequent occurrence. Just because the parents have the gene doesn’t mean it will have a litter full of polydactyl kittens.

Forty percent of Maine Coons are polydactyl, which is likely where the trait originates from. They use the extra toes to help them tread lightly on snow without falling in.

Some owners of these cats will say that they are more intelligent. There is no science to back this up, but in general, cats are very smart. This common thought may be due to the fact that these cats can learn how to do things like open doors, latches, windows, or even hold things.

It isn’t something they inherently know how to do because of their extra toes, but the skills they learn because of them. While they may not technically be smarter than any other cat, the fact that they can learn to open doors or windows does make it seem like they’ve got a leg, or a toe, up on other cats.

Since any breed of cat can be polydactyl, there isn’t a risk for inbreeding. It is a recessive trait, so breeding the cats simply because it has extra toes doesn’t mean they will have polydactyl kittens. Inbreeding could increase the percentage, but this practice isn’t commonly done since it is already a common trait. The likelihood of getting an inbred polydactyl is, therefore, very slim.

Are Polydactyl Cats In Pain

While it may seem awkward to have extra toes, they do not harm the cat in any way. That being said, it also doesn’t give them any advantages either. In some rare cases, the extra toe and claw may not have formed properly, and due to that, the cat may develop something similar to an ingrown or overgrown claw. If the gene had such negative side effects, it most likely would have died out.

Do Polydactyl Cats Have Health Problems

That being said, you will need to keep up with trimming their nails, just like you would for your other kitties. I think all cat owners have felt the sting of cat scratches from untrimmed nails.

Felines are known for their agility and grace, and the same can be said for polydactyl cats. Despite having a few more toes than other kitties, it doesn’t make them any less nimble.

Polydactyl cats were very popular among sailors who loved their appearance and thought the extra toes made them better climbers and mouse hunters. While there’s no real science to back up that they have any advantages over the normal number toed kitties, they can keep up with other cats.

Is polydactyly More Common In Males Or Females

Polydactylism is a recessive trait due to a mutation; therefore, it isn’t any more common in males than it is in females. You’re just as likely to come across a female polydactyl cat as a male one. Part of the reason polydactyl cats are so fascinating is that they can be any gender or cat breed.

Polydactyl cats usually have extra toes that look like thumbs. You may wonder if this means they can open all your doors and windows. Some polydactyl cats do, in fact, learn to undo latches or turn doorknobs, but it isn’t an inherited trait.

Owners have said that their polydactyl cats learn to do all kinds of things with their extra digits, even holding items. If you haven’t seen the video of a polydactyl kitten holding a bottle, go look it up! Like all cats, polydactyl cats are curious about their surroundings and will likely test to see just what they can do with those extra toes. I can’t imagine what kind of mischief a kitty with extra toes could get into!

How Do You Care For A Polydactyl Cat

Caring for your special feline friend isn’t any different than caring for a cat with a regular number of toes. They need love and attention, just like any other kitty, as well as routine checkups and shots. It would help if you trimmed your cat’s nails regularly, so they don’t get overgrown or tear. A vet or groomer can do this if you’re unsure or uncomfortable doing it yourself. I’m always so impressed by how quickly my vet can trim my cat’s nails!

How Many Claws Do Polydactyl Cats Have

Typically, cats have 18 toes, but cats can have up to eight or nine toes on each paw with polydactylism. That’s a lot of claws! However, the extra toes are usually found on the front claws. Just like all the other toes, these extra appendages will have normal claws. They are exactly like the rest of the claws and require no special treatment. And extra toes means extra cute little toe beans! Who wouldn’t love that?

Are Polydactyl Cats Worth Money

Just like any other rare breed of cat, these kitties can cost you a bit of money. If you’re looking to get yourself a mittened friend, it could cost you upwards of $1000 for a kitten.

Some adult or retired polydactyl cats can go for less, around $500 or more. Because these cats are so special, they may set you back a bit of money, but if you look around, you may be able to find a polydactyl cat up for adoption. They may still cost you a little, but you get to know you gave a cute cat a good home.

Overall, if you’re looking for a cute, quirky feline companion, you may want to look into getting a polydactyl cat. If you’re used to owning a cat, there’s no difference in care for these extra toed cats. Or if you’re not ready for ownership just yet, you can always visit them at the Hemingway House and Museum for some literature and snuggles, with a few extra toes.