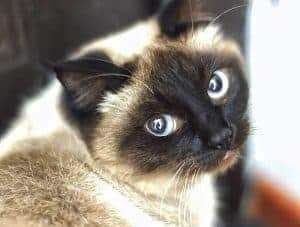 This was a question someone asked me the other day. At first, I answered no, but then I thought about it. Why not? But I’m no expert on cat genetics, so I asked around and did some research. Here’s what I learned.

Can a Tabby or a Black Cat Have a Siamese Kitten? Technically, no. A Siamese is a purebred cat while a tabby is not even considered a breed; instead, tabbies are considered housecats. A cat is purebred if its ancestors are from the same breed. However, because a tabby’s ancestry can include cats from many breeds, a tabby or black cat can breed and give birth to a cat that looks like a Siamese.

Technically no doesn’t sound simple. I wish answers could be simple more often. A simple Yes or No would do. But with cats, the answer is never that easy. Sometimes a solution doesn’t exist. Ask any cat owner; he or she has plenty of unanswerable questions: Why won’t the cat stay off the counter? How did the cat figure out to open the door? Why did I decide to get a cat?

I promise to do my best to come up with a simple answer.

What is a Cat Breed?

I said a Siamese is a different breed from a tabby. So what does cat breed mean?

For a cat to be part of a breed, it has to meet specific criteria as determined by organizations such as the Cat Fanciers Association. Standardized criteria allow people to decide which breed a cat is by judging it against the standard. Anyone can say a cat is a Siamese, but if it doesn’t meet the criteria, it will not be considered a pure Siamese.

If a cat is a member of a specific breed, all its ancestors, siblings, and offspring will share enough traits that they will have similar appearances, personalities, and instincts.

Cats of the same breed will breed true, which means their offspring will also be the same breed. Breeding a Siamese with a Siamese means you will wind up with Siamese kitties. What will the kittens of a Siamese cat bred with an American Bobtail look like?

Your guess is as good as mine. And the next generation of kittens will be even more unpredictable since the genes they inherit will be more dissimilar. Can a kitten eventually show up that looks like a Siamese? It’s certainly possible, especially if there are several Siamese in the family tree.

What is a Purebred Cat?

If an animal’s parents are both from the same breed, its breeding is “pure.” Pure means it has no ancestors from a different breed. In practical terms, it means you will be able to predict what the kittens of a Siamese will look like. However, it doesn’t mean that every cat will be identical. They will have different

Still, they will share enough similar traits that you know the cat belongs to other cats of that breed. If the cat runs around all day, won’t leave you alone, and will not stop meowing, it’s a Siamese. Just ask a Siamese cat owner.

One weakness of purebred cats (and dogs also) is that their gene pool is not diverse. Animals with greater genetic diversity stand better odds of being healthy while purebred cats are bred to maintain the standards of that breed, so their gene pool becomes limited. Because there are fewer genes to choose from, kittens of purebreds are more likely to inherit health problems.

What is a Cat That Isn’t Purebred?

A cat whose breeding isn’t pure is sometimes called a non-purebred. Other people use the term “mixed breed.” A much nicer-sounding name that doesn’t sound like an elitist putdown is domestic cats. The term house cat is another term used sometimes. Whichever term you use, these cats are the result of cross-breeding.

And all that cross-breeding leads to so much variety that there is no one-size-fits-all description of domestic cats. They can be long-haired or short-haired, have a solid coat or striped, be large or small, thin or fat. One easily recognizable way to categorizing them is by coat length. Therefore, a cat can be a domestic shorthair or a domestic longhair. Many house cats fit into one of these three categories:

None of these cats are purebred, however. Tabbies, for example, are non-breed specific. Tabby is a word used to define certain coat patterns. That’s why several purebred cats are considered tabbies, such as the Ocicat.

How Do I Know My Cat is Purebred?

So how does someone determine if their cat is a purebred? Simple: ask the cat for its papers. Purebred cats typically have official papers that will indicate the ancestry of the cat. Of course, they don’t carry these papers—that’s what owners are for. If your cat doesn’t have the documents, you might be able to look at its features to decide what breed your cat might be. But you won’t know until your cat has kittens, and maybe not even then. A cat trait might not show up for several generations.

Genetic tests now exist that can help you determine the breed or breed mix of your cat. The tests use your cat’s DNA to determine which breed your cat is most likely related to. Some veterinarians and veterinary genetics labs provide this service. The UC Davis Veterinary Genetics Laboratory has detailed explanations that will answer many of your questions if you are thinking of having this done for your cat.

Are all Purebreds the Same?

If someone says they want to sell you a purebred cat, ask to see the cat’s pedigree. A pedigree shows the names or titles of cats going back to numerous generations. A careful breeder will make sure the pedigree is accurate and take pride in titles such as CH (for Champion) or DGCH (for Double Grand Champion). Those titles show the dedication and hard work that has produced the cat you see.

There is even a protocol to the naming of purebreds. A cattery is a name a breeder uses, and it comes first. Next comes the name the family or owner gives the cat. Then, if the owner is also a breeder, that name will arrive at the end. So Fuzzyslippers Fancy Felix Gumpha means Fuzzyslippers is the Cattery the feline comes from, Fancy Felix is the family name, and Gumpha is the name of the Cattery that will use Fancy Felix to continue the line. At home, they probably call the cat Felix.

Not everyone who claims to be breeding purebreds is reputable. Organizations exist which will give purebred status to a beginning breeder. Unless the breeder is recognized by the Cat Fancier Association, stay away. Dishonest breeders are out to make money from gullible people. As you learned, purebred cats have a tendency for genetic disorders. An honest breeder will perform those tests and not sell a cat whose DNA shows they carry certain traits. A dishonest breeder will sell any cat in the litter without regard for its health.

People considering getting into the cat breeding business (creating their own Cattery) should consider all the steps involved.

Becoming a breeder requires money, time, and patience. No wonder over 95% of cats in America is common cats.

So Can a Tabby Have a Siamese?

A tabby or a black cat can give birth to a kitten that looks like a Siamese cat. This can happen because ordinary cats have a large gene pool to draw from. Maybe somewhere in the family tree, a Siamese mated with another cat, and now the features of the Siamese cat have shown up. Most people would look at the cat and say it’s a Siamese.

How much does it matter anyway? Unless you are willing to pay the additional costs of a purebred, what really matters is how you feel about the cat. Shelters are full of cats people gave away or abandoned. Those cats need a good home, not a pedigree.

link to Why Do Cats Cry Like Babies - Myths & Explainations

Have you ever been sleeping peacefully when, all of a sudden, your slumber is shockingly interrupted by the grating sound of your howling cat? The howl is sharp, shrill, and loud – and even, oddly,...

It’s one of the worst feelings in the world when you realize your beloved cat is nowhere to be found. While cats are notorious for being adventurous creatures, you will still worry about them going...