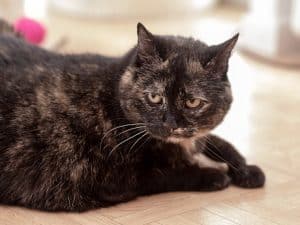 Cats are unique and come in all shapes and colors. The most prominent feature of cats though is their coat patterns. Some of the most popular patterns include the tabby pattern and a tortoiseshell pattern.

On the surface, these might seem like ordinary house cats, but there is quite a bit of interesting information when it comes to Tortoiseshell and tabby cats. We’ll share some of those interesting finds and much more about tabby cats too!

Tortoiseshell And Tabby Cats Are Not Actually Cat Breeds

Tortoiseshell cats and Tabby cats are actually not individual cat breeds themselves. That’s a common misconception. The reality is that those terms simply refer to the coat pattern that your particular cat has. Nearly any breed of cat can be a tabby cat. It’s one of the most present coat pattern genes seen in all domestic cats.

Tortoiseshell cats, on the other hand, are quite present but cater to certain breeds more than others.  Some of those breeds include the British Shorthair, Maine, Persian, Cornish Rex, and many more. In fact, both the tabby and tortoiseshell coat patterns can combine through genetics and form a really unique design. You could essentially end up with a tortoiseshell cat that has stripes and swirls in its coat. These are now referred to as Torbie cats instead of Tortie cats.

One of the biggest differences between tabby cats and tortoiseshell cats is the variety of patterns each cat has. Tortoiseshell cats, for the most part, feature orange and black colors that are connected to each other in a splotchy pattern. the pattern ends up closely resembling a real tortoiseshell. Sometimes they can also feature white under their bellies and even be split-faced with orange and black on either side.

Tabby cats are a little different though as the patterns have much more variety. There are 5 distinct patterns seen in tabby cats below.

The classic tabby pattern is the typical blotches found on most cats. They can appear as dark swirls in random shapes and sizes all around the coat. Usually, this pattern stops just at the feet and also covers the tail. The mackerel pattern is probably the most common tabby cat pattern you will see. This is where the cat features thin to medium size stripes along the whole body.

The stripes run vertically to the back so it almost looks like a mackerel fishbone structure hence the name. Next is the spotted tabby cat which is similar to the classic pattern. The cat will feature small, medium, and large spots across its body. Those spots will appear at random and take on a variety of shapes from round circles to ovals.

Ticked patterns are mostly seen in Siamese cats. This is when the individual hair follicles are striped horizontally rather than the entire follicle. Patched is similar to what you’ll see a tortoiseshell cat represent. The spots will be in specific locations rather than across the whole body though.

The patches of colors will still remain, so sometimes they are called patched tabby cats. It’s really easy to get these cats mixed up though because the addition of the tabby stripes makes some of the orange colors tougher to see.

Although it’s tough to tell the differences between Tortoiseshell and Torbie cats, you could always look at the forehead. If it has the tabby gene in it, you will most definitely see the iconic M pattern on the forehead of the cat. Also, look for areas of orange (red) on the cat’s feet to help determine if it’s a tortoiseshell mixture.

Males, on the other hand, have an X and Y chromosome, so the likelihood of them carrying both color genes is extremely rare. They only have one color gene so male cats will either be only orange or black, not a combination of both. If you do happen to find a male tortoiseshell, there is some reason for concern.

Although extremely rare, fertile male tortoiseshell cats do exist. Much of this has to do with certain genes shutting off certain colors so that the pattern can be formed.

Tabby Cats Have An M On Their Forehead

One of the big indicators that a cat is a tabby cat is the famous M on their forehead. No one really knows why the M exists other than it’s definitely tied to the cat’s genetics. Tortoiseshell cats won’t have this M on their forehead unless they have the tabby gene in them.

Tabby cats, on the other hand, are much less expensive, but again it depends on the breed. Considering most domestic pets are American Shorthairs, the costs will be relatively low. Specific tabby breeds may cost more, however. Certain tabby patterns can be more expensive too. Factors such as rare coat colors like chocolate and silver and whether the cat is bi-color play a role as well.

Because the breed of cat plays so heavily into the cost of tortoiseshell and tabby cats, it’s helpful to have a list of them from most expensive to least. Remember that each of these cat breeds can feature the tortoiseshell or tabby pattern.

If you really want to get a tortoiseshell or tabby cat but save on the costs, adoption is definitely an option. Keep in mind that when raising any cat there are tons of other fees associated with them. This includes veterinary care, food, litter, grooming supplies, and everything in between.

Tortoiseshell Cats Can Come In Many Colors

Did you know that tortoiseshell cats can come in a variety of colors? This includes common colors like black, white, and grey as well as rare colors. You can find tortoiseshell cats in cream, red, chocolate, blue, gold and many other coat colors. Some of the more unique colors like blue and fawn are caused by the dilution of other colors. This gives the cat a much lighter coat color.

Sometimes the cat can experience a bi-color pattern across the face. In this case, half of the face will be orange while the other have is black. It will be split down the middle.

For the most part, tortoiseshell coats will contain shades of orange (red) and black. Sometimes white can be mixed into the coat underneath the belly. This is because most tortoiseshell cats are tri-color. What makes the design of their coat so unique is not necessarily the colors, but how they’re woven together. This leaves you with a cat with big color splotches all over its coat.

There have been many studies done with cats when it comes to cat coat color and behavior. While there is a lot of evidence to support cat breeds and temperament, it’s important to remember that each cat is an individual. Tortoiseshell cats, however, have developed a reputation for their sassy attitude.

Tortoiseshell cats have been described as aggressive, wild and energetic, and much more. The phrase has been coined as “tortitude”, however, there is nothing distinct to show that tortoiseshell cats are any more reactive than other cats. Similar studies have been done on tabby cats when it comes to linking the coat pattern with behavior.

Cornish Rex Breed Is More Likely To Be A Tortoiseshell

Luck And Other Myths

Every type of cat breed and pattern seems to have a unique story behind it. For example, tabby cats have a history dating back to the Egyptian period. There are also stories that try to explain the unique M pattern seen on the forehead of tabby cats. Many of the tabby cat myths and legends refer to biblical texts and regions.

Tortoiseshell cats also have some unique myths too. Most notably is that tortoiseshell cats are seen as a symbol of luck. These stories can be traced all the way back to the Celtic period. There are also connections to luck in Japanese culture as well as Irish and Scottish households. Tortoiseshell cats are thought to protect against ghosts, curing ailments, and even to bring good fortune to those who own them.