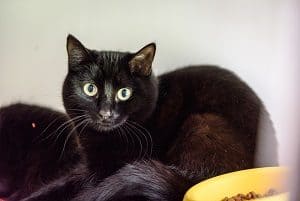 Cats can eat Cheetos, but it is not a healthy snack for them. Cats are attracted to the spices on them. The sodium content of Cheetos is unhealthy or cats if eaten in large amounts.

Since you probably won’t be able to ask your cat their favorite flavor of Cheetos, you can probably chalk their interest up to curiosity. Giving your cat a small bite of your Cheeto – or almost anything else – but not have any immediate effects. The last time you gave your cat a bite of a Cheeto, nothing happened other than the huge mess they left on the carpet. But are Cheetos safe for cats to eat?

Can a Cat Eat a Hot Cheeto

Technically speaking, yes, a cat can eat a hot Cheeto, but it probably isn’t the best snack for your furry friend. The temperature from the spices will make your cat uncomfortable. Expect to see frequent trips to the water bowl, even if it’s just one hot Cheeto!

Think about it: how many times have you been eating something, and your cat comes along for a bite? If your cat is anything like mine are, your cat will probably jump right up and take what it wants. At least dogs beg!

Hot Cheetos aren’t the softest food, but if you share your favorite snack with your cat, your cat will be able to crunch it and eat it. It’ll be a lot like a cat treat. Although, I’m not sure I want to see the mess that’s leftover on your couch or your cat (especially if they have white fur!).

Even though your cat can eat the food, it doesn’t mean your cat should. But we’ll talk a little more about that later on.

Can Hot Cheetos Kill A Cat

Your cat will not get immediately sick and die from eating hot Cheetos, but it could potentially negatively affect your cat in the long run. And you definitely wouldn’t want that!

Cats eat lots of things they probably shouldn’t: bugs, flowers, that piece of food they fished out from under the oven. Your cat might be sick for a few hours or a day, but they usually fully recover. The same could be said for a cat that munches on a Hot Cheeto.

There will probably be no immediate impacts on a cat that eats a Hot Cheeto once or twice. If Hot Cheetos becomes a staple in your cat’s diet, that’s when you might want to begin to worry about your cat dying from eating Hot Cheetos. Hot Cheetos have a lot of salt, more than any cat requires in their diet.

Whether it’s you munching away on some Hot Cheetos or your cat, the nutritional content stays the same (though it might affect your cat differently).

Think about it like this: one small Hot Cheetos bag will take almost 20 minutes of running to burn off. What could it be for your cat then?

Are There Any Health Benefits To Cats Eating Cheetos

There are no health benefits to your cat eating Cheetos.

Sure, there are no benefits, but are you really surprised? Cheetos aren’t the best snack you could pick up as a human, so why would they be any better for your cat?

Since Cheetos are so salty, Cheetos will do more harm than good for your cat. Again, Hot Cheetos are salty for you, and you’re a human! Imagine your cat – that is much smaller than you – eating something so salty. Cats don’t need that much salt either, so don’t start thinking you’re doing your cat a favor by giving them a bite of your snack even if they start acting like they’re dying because they want a bite so bad.

How Much Salt Is Safe For Cats

Like humans, cats can benefit from a moderate amount of salt in their diet because it promotes healthy body functions.

Salt is a mineral that sustains our bodies, cells, and nerves. But, like anything else, too much of even a good thing could be bad.

According to Iams, most dry cat food should have 0.2% of salt in them. Salt can be found in other kinds of cat food too, like in wet food; however, the salt will come from meats and fish. Cat food manufacturers probably aren’t adding as much salt as American foods are.

No matter if your cat eats wet or dry food, you shouldn’t be concerned about the salt in the food you buy at Walmart or Chewy. That’s a safe amount of salt for your pet. The salt comes from “people food” that may pose the biggest threat to your pet.

What Happens If A Cat Has Too Much Salt

If your cat has too much salt, the same thing can happen to your cat as you: high blood pressure and a possible stroke.

Much like humans, cats can be at risk for high blood pressure and even a stroke too. Usually, high blood pressure from salt isn’t something you’d usually be concerned about in your pets. After all, their cat food doesn’t have added salt, and cats cannot munch away on a bag of chips.

However, once you start introducing different foreign foods into your cat’s diet, that’s where you can have a problem. One Cheeto might not seem like a lot, but remember, your furry friend is much smaller than you. If you have to chug water after eating a snack pack of Cheetos, just think of what it does to your cat.

Can My Cat Get Salt Poisoning

Cats and dogs can become victims of salt poisoning, especially if they eat too many Cheetos or similar snacks.

Salt poisoning might not kill your cat or your dog, but it can lead to a serious illness that is terrifying enough. Some of the common symptoms include:

If your pet is experiencing any of these symptoms, the best idea is to take them to your local veterinarian.

You might have seen your pet eat something with high salt content, but other things might also lead to salt poisoning in pets. For example, homemade playdough and paintballs can have high salt, and your pet may have easy access to those, especially if you have kids. Even regular table salt can be toxic enough to lead to salt poisoning in your animals.

If you still insist on sharing people’s food with your cat, there are safer alternatives than Hot Cheetos. Keep in mind that cats are cats; not many foods are better for cats than cat food.

As tempting as it might be, don’t start to give your cat a large amount of Hot Cheetos. The salt content isn’t worth it for your furry friend, even if they’re trying to stick their head in the back. If you want to share a meal with your cat friend, there are better alternatives. And while you’re at it, you should probably get rid of those Hot Cheetos too.

[…] you notice that your cat likes to take a sneaky bite of your Cheetos, you can rest assured that the ingredients in these snacks aren’t toxic to […]