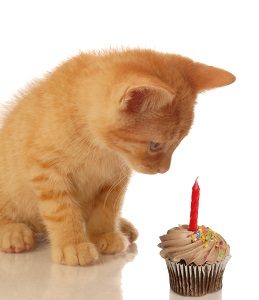 Every once in a while, when I’m celebrating with a piece of cake or some frosting on a graham cracker, I notice my feline friends sniffing at the frosting with obvious interest. Since I want my cats to have a great life, I try to make sure they get a healthy diet and get treats regularly, and I wondered if frosting might be something I could give them, only in small amounts, of course. But first, I needed to know, can cats eat frosting?

Cats can eat some kinds of frosting. Frosting is a high-calorie, high-fat food, which is likely why your cat is interested. Different flavoring can be toxic to your cat and lacks in nutritional value essential for cats to function properly.

So, while you can give your cats a small amount of frosting or icing on rare occasions, there are some limitations. Since this is a complicated issue, we wanted to go into a little more detail than our usual short answer.

So, to start with, we’re going to focus on basic vanilla flavored, uncolored frosting. If your cat gets a lick or two of this kind of frosting, you probably have nothing to worry about. The worst you can expect might be a little bit of an upset stomach or diarrhea because most frosting is dairy-based and adult cats are pretty much all lactose intolerant.

But that’s where the problems start. Cats are lactose intolerant, so your typical buttercream or cream-cheese based frosting isn’t good for them in large quantities.

The next problem is food coloring, artificial flavors, and other additives. It can be hard to know what food colorings or artificial additives are safe for cats, so we generally don’t want to give cats any of them. Food coloring can contain a large amount of alcohol, which can be harmful in very small quantities for cats.

Even the tiny amount of alcohol in colored frosting may be a problem if your cat eats enough of it.

The last thing I want to touch on is that artificial sweeteners can also be incredibly dangerous for animals, not just cats, because they metabolize those sweeteners differently.

Cats usually aren’t attracted to sweet things, so artificial sweeteners are usually less of a problem for them than for dogs. The problem is that frosting is attractive for other reasons, and cats might make themselves sick by eating even a small amount of artificial sweetener without realizing that there’s a problem.

Can Cats Have Chocolate Frosting or Icing

Absolutely not! Chocolate is toxic to cats, just like it is for dogs. Most of the time, cats aren’t drawn to chocolate foods, but if your cat shows interest in chocolate frosting, you should make sure it’s out of reach and clean empty plates and other containers as soon as possible.

Even if your cat enjoys an occasional lick of plain vanilla frosting, you should keep the chocolate kind far away from your feline friends.

What goes better with frosting than cake? Nothing, except maybe cookies.

Thinking about frosting made us wonder if cake is a better option for cats, especially as a treat. Of course, chocolate is still toxic, so no chocolate cakes here, but would a plain white vanilla cake be an option.

Well, technically, cats can safely eat a small amount of white cake as long as you follow all the same rules you follow for frosting. That means:

But, when it comes to cake, that isn’t too hard to accomplish, especially if you bake the cake yourself at home.

Just because cats can eat cake doesn’t mean they should.

Cake is junk food, whether you’re talking about people or cats. It’s a lot of carbs with some fats, but almost no protein or other nutrients.

While that might be okay as an occasional treat for you, your cats don’t eat as much as you do, and they need high-quality sources of animal protein and critical nutrients like fiber, vitamins, minerals, and enzymes. Cake doesn’t supply any of those things.

So, while your cat will probably be okay if they steal a bite or two of your vanilla birthday cake, you shouldn’t make a cake just for them for their birthday or anything like that. Instead, stick to cat treats, or even a cat-cake that’s made from cat safe ingredients like meats, some grains and vegetables, and broth or water.

The good news is that most cats won’t be interested in cake. Unlike frosting, your average cake won’t have too many ingredients that appeal to cats. Unless, of course, your cat likes to eat bread. Carb-chasing cats will probably think that cake sounds like a wonderful treat.

Speaking of desserts, you might have heard that cats can’t taste sweet things. Like many cat owners, we wondered if that was true, especially after our feline friends showed interest in frosting.

The truth behind the myth? It’s not a myth. Cats really can’t taste sweet things, probably because their bodies don’t need carbs as much as ours do, so there isn’t as much evolutionary reason to reward high-carb foods that taste sweet.

So, while your cat might be interested in your frosting, or some of your other sweet desserts, it’s not the sugar that’s attracting them. Like the grain or fat content, something else about your treat is likely what they’re after.

Remember, just because your cat thinks something smells good doesn’t mean that it will be good for them.

Now that we know cats can’t taste sweet, there’s another natural question. Can cats eat sugar, or is it bad for them like other ingredients and artificial sweeteners?

Well, this is another complicated question. Cats aren’t generally going to get sick or have problems if they get the occasional sweet food item, but sugar almost certainly isn’t good for them either. And, when you think about it, most frosting is loaded with sugar.

There’s even some debate about the number of carbs in cat food because cat’s bodies aren’t designed to process sugar any more than they are designed to taste it. Grains and even fruits and vegetables contain a lot of carbs that ultimately break down into sugar, but we don’t know if cats produce the enzymes needed to absorb and benefit from sugar at all.

Indeed, we know that cats should not have sugar as a meaningful part of their diet. They won’t benefit from eating it, and adding it to supplements or medicine won’t make them taste any more appealing for your feline friend.

So, it’s probably best if you try to limit your cat’s consumption of sugary human foods, even if they seem interested. And when you’re looking for cat treats, kibble, and wet foods? Sugar, corn syrup, and other sweeteners have no place on the ingredient list.

Why Do Cats Try to Eat Frosting (And Other Desserts)?

If cats can’t taste sugar or sweetness and don’t need extra carbs in their diets, then why do so many cats try to steal frosting, ice cream, marshmallows, and even cotton candy from their owners?

Well, there are a lot of reasons, but it all comes down to your cat’s basic instincts. They do like to eat high-fat foods, even though a lot of extra fat and dairy isn’t really good for them. It’s all about trying to get enough calories to survive in the wild, and domesticated cats don’t realize that their next meal is guaranteed, so they’re willing to go after high-calorie foods even when they don’t need the calories.

Other times the food in question might make your cat think of a prey animal or their toys. That may be why some cats love to bat around a marshmallow or two. Taking a bite of those marshmallows is just more playtime fun since play mimics wild hunting for many domesticated cats.

There may not always be an apparent reason why your cat is going after sweet foods, but it’s universally true that they don’t need sweets.

If your cat is suddenly losing weight and shows interest in some sweet foods, don’t think of those foods as the solution. Instead, it would be best if you looked for other nutrient-dense ways to supplement or change your cat’s diet to help them maintain a healthy weight.