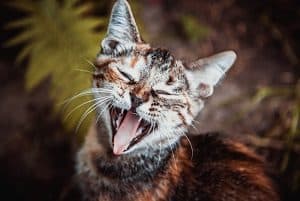 We’ve all talked to our kitties as though they’re people. Talking is our preliminary way of communicating as humans, so naturally, we talk to our cats. Sometimes they even meow back at us! But we know that there’s a good chance they can’t understand everything we’re saying.  Are their meows a response to what we’re telling them? Can cats talk?

Cats can talk and often do this through meowing, specific vocalizations, and body language. Different vocalizations vary from cat to cat.  Cats can understand words and associate them with positive and negative experiences. Cats can also talk with other cats.

Cats have a variety of ways in which they communicate, both with their humans and their fellow felines. In this post, we’ll delve into the world of cat communication, find out how they let us know what they’re thinking, and learn if perhaps there’s a secret cat code we’re missing out on!

Can Cats Learn To Talk

“Talking” for cats is very different than it is for humans. Cats have an array of vocal inflections and sounds available to them. There’s the standard meow or a “mew” for kittens. Then there are chirps, growls and hisses, and purrs. Each of these serves a very different purpose as a cat communication tool. A cat’s body language is also a vital part of the way they communicate.

The good old-fashioned meow is the most famous, and most versatile, of the cat sounds. If you’ve listened to your kitty, you’ll note the different meows come at different times. Almost every cat has their “feed me!” meow. Other owners have noted different sounds for a cat wanting to cuddle, wanting to play, or being displeased by something. Many feel these sounds are specific to each cat, or to the interpretation of the human hearing them.

Kittens naturally make a “mew” sound to cry out for milk from their mothers. Cats who see their humans as parents may be more likely to transfer this “mew” into a grown-up “meow.” Then there are the growls and hisses, passed down from big cats, which indicate displeasure, fear, or anger. A chirp from a cat is also genetically built-in and generally means they’re looking at or stalking prey.

Finally, there is the purr, which is the most contested of all cat noises. Often, cats purr when happy, as demonstrated by the loud and steady purrs when they sit on their humans’ laps. But some cats purr when nervous or angry, making the sound very confusing. Like their meows, cats can manipulate their purrs if needed to get what they want. Cats also purr when in labor or pain. Scientists are still trying to understand this common cat noise, but it would appear that it can serve both as a sign of happiness and a way for a cat to soothe itself.

Because of the variations in sound, it isn’t easy to pin down a specific cat language when it comes to vocalizations. Some, however, believe there are uniform sounds that each cat makes. In 1895, as cats were becoming domesticated, a scientist named Alphonse Leon Grimaldi believed he had translated seventeen different cat sounds into English words such as “here,” “beware,” “water,” and “meat.” Others have backed him up more than a century later, believing there is a uniform sound to cats expressing happiness or dissatisfaction.

However, these studies are controversial. Many modern scientists believe the sounds cats make are subject to interpretation by the humans hearing them. In reality, cats are trying to control us rather than communicate with us!

Most can agree that for cats, “talking” is not necessarily a vocal function. Many scientists believe that cats only started meowing at humans because we weren’t doing a very good job understanding their physical cues. Body language such as the tail’s position, slow blinking, and rubbing against things can definitively give more information than the noises they make. A high tail indicates happiness, a slow blink is a kiss, and rubbing against legs is a sign of loyalty and love.

There’s a stereotype of dogs rushing to greet their owners when they come home, while cats sit idly on the couch. But the truth is, cats get just as attached to their humans as dogs do, and many do have their own form of greetings when their owner comes through the door.

The most common way a cat will say hello to you is by coming to where you are and rubbing against you. Cats are very territorial, so when they do this, they get their scent on you, and in a way, “claiming” or reclaiming you as theirs with scents that only other cats can smell. If they’re happy to see you, their tails will also be sticking straight up in the air or swishing back and forth.

Cats might give me a meow as a greeting. It depends mostly on the cat. It can also depend on if they want something when they see you! If they’re hungry or want to go outside, there’s a much stronger chance you’ll hear a meow with your greeting.

Can Cats Talk To Each Other

Cats have physical ways of greeting each other. Meows are another story. Though some cats meow at each other, meows are largely for humans. The meow emerged as cats were bred to be domesticated, leading scientists to believe that the sound was explicitly meant to get the attention of humans.

However, there are many ways that our kitties have adapted to communicating with one another. In greeting a fellow feline, cats who are mildly interested in each other may touch noses. If they love each other, they may lick each other’s fur.

When communicating with other cats, the physical cues give far more information than vocal ones. When approaching a cat they like, a feline will make eye contact, have a tail straight up in the air, and give a blink. The ultimate compliment (for both cats and humans) is if a cat rolls over and shows their belly. In the wild, this is a sign of weakness or surrender, but it is a display of ultimate trust for domesticated cats.

While it’s fairly clear when a cat likes a fellow feline, their disdain for another cat is even more obvious. Cats’ tails will fold under or around their bodies to indicate fear or anger. If they’re looking for a fight, a cat will growl, hiss, or yowl at their enemy. If the claws come out, it’s time to get those kitties separated.

Like many aspects of cat communication, research is limited and sometimes contested. However, a researcher in Sweden named Susanne Schötz recently spent eight years studying cat vocalizations. She found that while cats don’t necessarily mimic words, they can mimic their owners’ inflections with their meows. Schötz also found that pitch and tone give away a lot about what a cat is feeling. Higher pitched meows, reflecting the sweet “pet voice” that some owners use, can indicate happiness and love, while lower-pitched meows, mimicking an owners’ “no” or “stop,” can indicate displeasure.

It’s unclear whether cats are mimicking us or we’re mimicking them. A cat is likely to meow more if we talk to them. Many owners mimic their cats’ meows. Given that cats began meowing to get human attention, your cat may think you’re attempting to speak their language and keep meowing back at you!

Some cat owners swear that cats can say simple words like “no.” (And of all the words cats would learn, that one would make the most sense for our feisty felines). Most likely, however, if cats mimic anything, it’s our vocal tones and inflections.

A recent Tokyo study has found that of all the words cats can understand, they are most likely to be able to differentiate their names. Because we don’t repeat the same commands often with cats, as we do with dogs, their name is likely the most human utterance they hear. Some cats’ ears or tails perk up; others may even come when you call them.

As for other words, it depends on the cat. When you get a dog, you expect to teach it words like “sit,” “stay,” “shake,” and others. Many dogs learn tricks in response to human commands. Cats are, shall we say, a bit more independent. While a dog can understand up to 100 words, our kitties can understand about 25 to 35. However, their understanding of inflections and complicated body language means our kitties can likely understand us; they just have a more sophisticated way of responding.

Cats have varying needs for human communication. Many are bred to need it, and most can become accustomed to hearing it. If your house cat hears you speaking to them often, they’ll grow to enjoy it and almost certainly communicate back with you somehow.

Responding to your cat’s meows, with human language or mimicking them, is a surefire way to get your cat used to vocally talking to you. If you want to speak with your cat, use a calm and loving tone. If you say negative things associated with their name, such as scolding them for being on the furniture, they may be less inclined to have vocal conversations.

You can also copy their body language, such as extending a cat “kiss” by looking at your cat in the eyes and slowly blinking. Laying on the floor with your cat to play with them or cuddle also indicates that you are comfortable with them, in the same way, cats expose their bellies to express love and trust.

Cats can be very independent, but, depending on their personality, that personal stimulation from their owner can mean a lot. Some breeds like the Siamese, Bengal, and other cats of Asian descent require more attention from their owners. Your cat will let you know what they want, but it never hurts to start with lots of varied communication.

While we humans think of talking as using our voices, cats, complicated little beings that they are, have developed a much more varied way to have conversations. While they may use their meows, they also show us a lot with their tails, ears, and general body language. Watch your cat’s behavior in addition to their vocalizations. They’re probably telling you more than you realize!