Why Do Cats Meow Back At You – How They Communicate 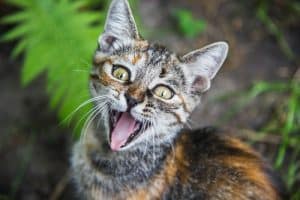 Cats are complicated creatures, and sometimes it can be difficult to tell why they are acting a certain way. After all, cats are social, but they can also be fiercely independent. They can be hard to read, but almost everything your cat does is some communication. That can make it difficult to tell why your cat is meowing at you, whether you said something first or not. So, why do cats meow back at you?

Cats meow back at you because they want to greet you. Cats also want you to hear them and gain your attention by meowing back to you. Meowing can also communicate hunger, stress, or anger from your cat.  Cats have a lot of vocalizations that they can hear, but humans can’t.

Now that you know that your cat is talking to you when they meow let’s dive into why your cat might meow back at you when you’re talking and how you can learn to understand (some) of what they are saying!

9 Reasons Cats Meow Back At You

This isn’t an exhaustive list by any means. These nine things are some of the most common reasons cats meow back at you, but there can be lots of other reasons as well.

They Are Trying To Communicate

They Know You’re Talking To Them

Cats can also meow back at you when you’re talking to them, and most of the time, it’s because they know you’re talking to them. Cats recognize when communication is happening, even if they don’t understand what you’re saying. Meowing is one way for them to tell you they are listening and care.

Your Cat Cares About You

Your cat may also meow at you from time to time to remind you that they care about you and want to make an effort to communicate with you.

Your Cat Wants To Greet You

Your cat may also specifically want to greet you, especially if you’ve been away for a while or have just gotten home from work. Cats love their owners, even when they seem a little more distant, and meowing is an excellent way for them to show it.

Your Cat Is Trying To Understand

When they do this, chances are your cat is trying to figure out what’s going on. That’s partly because one of the ways cats show affection is by mirroring people they care about. Mirroring requires some understanding, so if you ever feel like your cat is meowing to try and understand, the chances are that’s exactly what’s happening.

They Are Trying To Get Your Attention

Your Cat Is Saying I Love You

We’ve already mentioned that meowing communication is often one way for your cat to tell you they care about you, but sometimes it’s deeper than that. Cats generally love their owners, and they often want to say so. If your cat is meowing back at you consistently, you should see it as a sign that they love you.

They Are Lonely And Want You To Stick Around

Cats might be independent creatures, but they also don’t like being alone! Once your cat is used to having you around, they want you to be around, even if they aren’t interacting with you directly. If your cat suddenly starts meowing back at you more than usual after you’ve been gone for a while, chances are they are/were lonely.

Your Cat Is Angry And Wants You To Know

What’s It Mean When A Cat Meows At You

We’ve talked about a wide range of possible meanings behind your cat’s meows. The truth is that cats are incredibly communicative animals once you know how to read them, even though they don’t always tell you everything.

Mostly it’s up to your interpretation as a cat-owner to figure out the meaning behind each of your cat’s meows. Usually, it’s pretty easy to learn your cat’s angry meow, their hungry meow, and the meow that asks for scritches and attention.

Some cats will communicate other messages as well. Ultimately though, you’ll need to spend some time with your cat and getting to know their communication style before you’ll know for sure what your cat is trying to say.

What Do Cats Think When Humans Meow

Of course, we don’t have any talking or writing cats, and we can’t read their minds, which makes it more difficult to tell what your cat thinks when you meow. Likely though, your cat is mostly confused when you meow at them.

That’s because people don’t fully understand all the rules about meowing as a form of communication.

You might understand a few of your cat’s meows, but that doesn’t mean you know what the pitch of their meow, its length, volume, and other aspects mean. It might be a little like someone saying nonsense words in the middle of a conversation.

Of course, some cats might enjoy you meowing at them, but it’s more likely that your cat will be confused or irritated.

Is It Bad To Meow Back At Your Cat

It’s not necessarily bad to meow at your cat occasionally; don’t expect them to come running into your lap because you started meowing. It’s also important to pay attention to your cat’s reaction when you meow. If they seem especially irritated with you, maybe it’s best to skip the meowing for now.

Should I Meow To My Cat

This is a question you can only answer for yourself. Some cats meow with their owners and don’t seem to mind at all. Some even show some signs of enjoying and being interested in their owners’ meows.

Other cats get worried about another cat being in the house or get irritated and frustrated with human attempts at meowing.

Deciding whether you should meow at your cat is all about how your cat reacts to it and why you want to meow at them in the first place.

Do Cats Understand Us When We Meow At Them

Probably not. After all, you don’t necessarily know what you’re saying when you start to meow, so your cat probably doesn’t understand either. They might get the general message that you’re happy or sad or want attention if you’re a good mimic and are using their meows as a starting place. But most of the time, no, your cat doesn’t understand you when you meow.

Cats meow back at you when you’re talking to them because they understand that you’re trying to communicate, so they’ll try to communicate too. They can even understand some of the words you’re saying, so it’s even possible that they’re communicating.

It’s widely thought that cats understand 20-30 words; the exact words depend on which ones you use most often around them. But your cat has more than 100 distinct vocalizations, so they can probably communicate more complex messages than they understand from you.

Chances are, when a cat comes up to you and meows, they are asking for something. It could be as simple as wanting your attention, or they could be asking for food or water, or even help to get to a toy or a favorite perch.

Every cat is a little different. Some cats don’t meow at all, while others vocalize about every little thing. Likely your cat is somewhere in the middle, but don’t worry if your cat is one of the two extremes. A cat that doesn’t vocalize much is probably just a bit more independent than usual. A cat the vocalizes a lot is probably just a little more social than usual and is trying to engage with you as much as possible.

Plus, learning their language is a great excuse to get some more time spent with your cat.

Even if your cat isn’t vocalizing a lot, they’re still probably communicating with you. Your cat’s ears, tail, and general body language can also be powerful means of communication for your cat. Paying attention to them will help give you more insight into what your cat is thinking and feeling.

Why Do Cats Lick Blankets - Should It Happen?
← Previous
Why Do Cats Have Webbed Feet - Is It Rare?
Next →