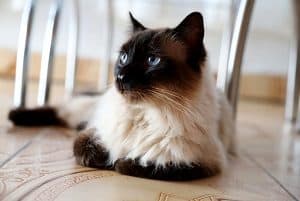 The dazzling blue eyes of a Birman cat are somewhat hypnotic. Couple that with their beautiful markings, and you have one fine looking feline. But making sure you truly have a purebred Birman is imperative. Verifying she’s a Birman all starts with the eyes. So, do all Birman cats have blue eyes?

All Birman cats have blue eyes. Blue eyes are caused but the lack of pigment development in the eyes. The blue eyes don’t affect their eyesight or cause other issues such as deafness. Birman kittens are born with blue eyes and the color extends into adulthood.

Knowing the characteristics of a purebred Birman is vital if you wish to adopt one. And the eyes tell all. Learn about those Birman’s famous and brilliant blue eyes. You’ll also learn how to care for them.

Why Birmans Have Blue Eyes

All kittens are born with blue eyes, no matter the breed. A lack of pigment causes this. Cats will develop the pigment in their eyes when they’re around five to six weeks old. If that pigment doesn’t develop, you end up with a blue-eyed kitty, like the Birman. Adult cats with blue eyes are not the norm. They are specific to certain breeds.

The Birmans have had blue eyes since they first appeared on the scene in France, circa the 1920s. It is thought the Birman originated in Burma. The country of Burma is now known as Myanmar.

Do Blue Eyes Cause Deafness in White Cats?

Unfortunately, there’s a high incidence of blue-eyed white cats who are deaf. This disorder correlates with the dominant white gene and is not related to the white spotting gene.

The dominant white gene is a mutation. The cat is white. The mutation contains one allele to be white. If there are two alleles, then the white cat will most likely be deaf. The white spotting gene creates patches of white on a cat. The cat isn’t white.

Fortunately, the blue eyes in the Birman are not connected with deafness. So, it’s totally safe to purchase this breed without having to worry about future health issues related to deafness. Other blue-eyed breeds that are not prone to deafness include:

How to Take Care of Your Birman’s Eyes

Be aware of your cat’s behavior when it comes to their eyes. Signs of a cat having eye problems include:

If you see your Birman doing any of these, there might be an eye problem. Take a look into those pretty blues. If they’re gooey instead of their normal clear, something is not right. Eyecare is often overlooked by cat owners, but if your cat has blue eyes it’s especially important to get them checked regularly.

That gooeyness is discharge, and it can indicate several different conditions. From something serious to the common cold, you’ll need to know when to consult a veterinarian. Several conditions that could be causing discharge include:

Yes, your kitty is capable of having this. It is also called conjunctivitis. The pink lining around your cat’s eye is inflamed. It causes the eyes to look swollen and red. It also causes a thick discharge. You’ll need to treat your kitty with eye drops for a few weeks. But watch for trouble breathing or diarrhea. This could indicate peritonitis, which is fatal.

This is often the cause of discharge in the eye. Upper respiratory infections encompass a few diseases, including:

These diseases have the potential to make your kitty seriously ill and can even lead to death.

This is a lack of tear production. With dry eye, the cornea can become inflamed. And if you don’t treat it, blindness can occur.

Your Birman has three eyelids. They include:

It is located in the inner corner of the eye socket and isn’t visible when the cat is alert. When relaxing or blinking, it moves across the eye. This third eye’s job is to produce tears. It’s where the tear gland is located.

If the third eyelid comes up, what’s called “prolapse,” there’s a problem. It should never be prominent when the cat is alert. A prolapsed third eyelid could signal several health problems. These include:

Just like humans, some cats have watery eyes. There are several reasons your cat’s eyes could be watering. Several reasons include:

Also, consider a contaminant that could have entered your kitty’s eye. In that case, they would only need a rinse. Some rinses that are rated well include:

The cat’s cornea can become injured. It may be inflamed or even ulcerated. You will note cloudiness. There may also be blinking and increased tear production.

Keep an eye on your kitty’s eyes and help keep them in the best shape possible. If you ever have any doubts as to the cause of your cat’s eye discomfort, please seek out a veterinarian.

How and why do cats have different colored eyes? It starts with the iris. The iris contains eye color. It has two layers called the epithelium and the stroma. These layers have melanocytes. The colors that the iris can create in cats are:

Blue eyes develop because the iris doesn’t contain any melanin. Fur color doesn’t necessarily dictate eye color, but white is the most associated with blue eyes.

The pigment in the iris and the way it reflects off their eyes gives the cat that orange hue. These are most associated with black cats. Although not all black cats have orange eyes. Some colors include:

But orange eyes are the most dominant. It’s what gives them that eerie Halloween look.

Similar to blue-eyed cats, cats with green eyes lack melanin. They’re not totally without it, but it does affect their eye color. Breeds that are famous for having green eyes include:

Besides our sweet domestic cats, the Jaguar also has brilliant green eyes.

This is a cat that is born with one blue eye, while the other eye is a different color. Although predominantly found in white cats, it can be found in any fur color. The cat must have the white spotting gene in order to have this phenomenon occur. A condition is a form of complete heterochromia. This can be caused by:

The majority of the time, it is genetic. It is interesting to note that this can also occur in humans.

Some of the characteristics of the Birman are their silky fur and beautiful points. But they are mostly known for those sweet sapphire-like eyes. Treasure them and take care of them. You’ll have them gazing at you for a long time.