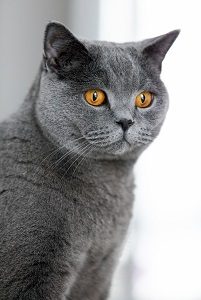 With such a loud purr attributed to the breed, it’s surprising that not many people are sure whether or not they can purr. Of course, there are reasons for the question.

British Shorthair Cats Are Affectionate, But Not Vocal

British Shorthair cats might not appreciate being picked up off the ground, but that doesn’t mean that they aren’t affectionate cats. They are quite fond of getting pets and scritches, and they’ll happily curl up next to you while you watch a movie.

That doesn’t mean that your feline friend will start purring while spending time with you. In fact, it’s quite the opposite of this particular breed of cat.

Individual cats are very different, even within the single breed. Some British Shorthairs will start purring just because they’re paying attention to you, while others will show clear signs of affection but never express a rumbly purr. This doesn’t mean there’s anything wrong with your cat, but that’s its personality.

You can expect most British Shorthair cats to fall somewhere in the middle, and more toward the quiet side. They’ll meow, purr, and make other noises on rare occasions, but not all the time.

So, don’t worry if your cat isn’t purring at your very often. This is a breed that likes to show their love in other ways, and we’re sure they’re quite happy to be there with you.

If you prefer a more vocal cat, then you might want to look into another breed. Siamese cats are the most vocal.

What Does Purring Mean?

If you’ve ever noticed that cats purr for a variety of situations, you might have wondered what your cat is trying to express with that comforting rumble. Are they in discomfort, or are they enjoying themselves? Sometimes purring can mean more than one thing, even at the same time!

In general, cats use purring to provide comfort. That’s why you might notice your British Shorthair (or any other cat) purring at you when you’re upset, or after you’ve stubbed a toe. In the wild, cats that socialize together will use purring to help calm and relax other members of their little pride. It’s instinctual and really built into their DNA.

But most of the time, domesticated cats are purring because they are already happy and relaxed. Since it’s a relaxed noise for cats, purring is a sign of contentment. If you have a particularly vocal British Shorthair, you might come across them purring in contentment simply because they found a cushion, or have been sunbathing and are very relaxed and warm.

If you’re scratching your cat or petting them, and they begin to purr, you can rest assured that you’ve done your job well. Purring is their way of telling you that what you’re doing feels good.

Purring is also an expression of trust, although it can be an indirect one. When your cat starts purring around you, purrs because you just got home from work, or purrs while lounging on the couch next to you, they’re saying that they are relaxed around you. They trust you. They want you to be comfortable and relaxed too.

Of course, purring can also be a way to ask for attention. Cats might be mostly independent, but they’ll generally want at least a little love and affection every now and then, especially if your cat is an only cat.

If your cat approaches you and headbutts your leg or hand while purring, it’s a safe bet that they want you to focus on them for a few minutes. It doesn’t necessarily mean that they’re feeling neglected, they might have an itchy ear that they want you to scratch or a food bowl they want to be filled. But, whatever the reason, that kind of purring means that your cat wants your undivided attention.

There are instances where cats will purr because something is hurting them, and they want attention and comfort to try and make it better, or because they are worried and afraid and trying to self-soothe.

Once you’ve learned your cat’s purring behavior, it’s easier to spot when there might be something wrong. But, a purring cat that also has a limp, starts purring while using the litterbox (particularly if it takes longer than usual) or is purring with distressed body language (like a tucked tail and ears that are pinned back), is a cat that might need a trip to your veterinarian.

Always use your best judgment, and seek medical care for your cat as soon as possible if you think there might be a problem.

Are Purring and Growling the Same Thing?

If you have a particularly loud British Shorthair, even if they are quiet most of the time, it can be easy to wonder if the purr you’re hearing is a growl, or if the growl you just heard was your cat purring and asking for some attention.

It’s an easy mistake to make with some cats, and British Shorthair cats are far from the only breed that can have this problem.

Fortunately, there are a few ways to tell the difference between the two.

For one thing, cat purrs tend to be higher pitched than growling, even when your cat is purring rather loudly. That follows the same pattern as the rest of cat communication. Higher pitched meows are much happier than low-pitched yowls (and both are explicitly meant for human companions).

Also, even cats that are purring in distress tend to be purring because they are anxious or in pain. That causes a cautious and closed body language, while growling is typically a threat, and used more when your cat is angry or has decided they are done being anxious and are going to attack whatever they think is threatening them.

Puffed fur, a wide leg stance, or even a lifted paw with claws out are all body language cues that your cat is growling, not purring.

Another way to tell whether your cat is purring or growling, even if the two sound very similar, is to see if your cat is paying particular attention to something. Cats might purr absentmindedly, even quiet breeds like the British Shorthair, but they are much less likely to start growling without being focused on something.

My British Shorthair Doesn’t Purr Much, How Can I Tell When They’re Happy?

Like all cat breeds, British Shorthair cats will occasionally decide that they don’t need to talk to their humans very much. A reticent cat may refuse to purr, meow, and even growl to express themselves. That’s perfectly normal, but if you’re used to vocal cats, it can take some adjustment.

One thing you can always do is pay attention to your cat’s body language. Upright tails are a sign of a pleased cat, while curvier question mark tails usually point to a cat that is playful. Pinned eats are a sign of anger or agitation, as is puffed fur and an arched back.

But those aren’t the only signals your cat is giving you.

An affectionate and happy British Shorthair will usually follow their chosen person around. They like to be in the same room, and sometimes seem like they are supervising their chosen human. This cute behavior is also a sign that your cat is relaxed and happy, even if they aren’t purring.

Headbutts are another sign of affection and happiness that doesn’t require purring. Not only is this affectionate rubbing a sign that your cat wants some of your attention, but it’s also a sign that they want you to smell like them. While that may not be the same as trading friendship bracelets, in the cat world, it’s pretty close.

Happy cats will also usually groom freely. While it can feel a little awkward to have your cat grooming in the middle of the floor, depending on what exactly is being groomed, a cat that is grooming is a cat that is content and unconcerned.

British Shorthair cats tend to be relatively low-drama and calm most of the time. But, playfulness is another sign of a happy and contented cat. If your British Shorthair gets the occasional case of the zoomies, plays with the cat toys you have around the house, or even swipes at your feet as you’re walking past furniture, chances are, they are a happy cat.