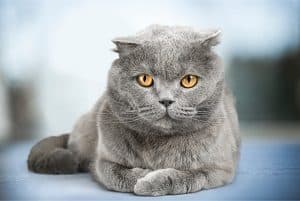 For such an ancient breed, British Shorthairs are remarkably healthy overall. They have very few known health issues, and most reputable breeders test their breeding stock, and all of their kittens, to make sure they are providing healthy animals. But that doesn’t mean that you won’t occasionally have a health question about your cat. For one thing, while all cats have a mild scent, many wonder if it’s normal for British Shorthair cats to have a more noticeable smell than other breeds. So, do British Shorthair cats Smell?

British Shorthair cats smell, but not any more than other cats do. Just like other breeds of cat, several different things can cause your British Shorthair to develop a more noticeable scent. Unique orders can be attributed to the differences in individual body chemistry.

While all cats have a scent, a cat that is particularly smelly might be a bad sign. In this article, we’ll dive into what causes cats to smell and ways to help them keep better hygiene.

There are lots of reasons that your British Shorthair might have a slight scent that is entirely benign. However, if the smell is more persistent, or is unpleasant, you might want to visit your veterinarian. Several health conditions can cause problems for British Shorthair cats, just like other breeds.

We’ll discuss those, as well as less worrisome causes of scent. But we’re not vets, so, when in doubt, seek veterinarian care.

This is probably the most straightforward cause of odor in cats. If you’ve recently changed food brands and notice that your cat is starting to develop a little scent, chances are they are reacting to the new food in some way.

Even if your cat’s scent changes a little with food, that isn’t necessarily a reason to switch foods right away. After all, diet can affect human scents too. Give your feline a couple of days with the new food to see if the new scent calms down.

We’d recommend going back to your cat’s old food for a little while, at least until the smell seems to go away, before switching to another new food. That way, your cat’s system has a short time to re-adjust, and you know that if they develop a scent again, it’s probably the new food.

Food sensitivities can sometimes cause a change in scent. More likely, though, the new food is causing your cat’s gut bacteria to shift or change in some way. Changes in gut bacteria can also cause some mild gassiness, so don’t be surprised if your cat’s litter box also gets a little smellier during food transitions.

British Shorthair cats are slightly prone to tooth issues. It’s not enough to be significantly more concerning than with other cats, but if you notice a little bit of an odor around your cat, you might want to check and see if your cat’s breath is to blame.

While it’s easy to notice bad breath in a dog, your cat’s bad breath is a little easier to mistake for general odor.

Cats often aren’t fond of tooth brushing, and it’s easy for them to develop tooth and gum problems, especially if they eat kibble instead of wet food.

One way to counteract that is to buy toys that help brush your cat’s teeth. But even better is to start brushing their teeth for them. They don’t need their teeth brushed as often as you do. Many cat owners aim to brush their cat’s teeth about once a week.

But if your cat already has terrible breath, you may want to try for a little more often.

It’s also a good idea to get a cat with bad breath checked out at the vet. Your vet will be able to examine their teeth and make sure there aren’t any more serious problems like cavities or infections causing the odor.

Your vet can treat those issues and will also be able to recommend ongoing care to help prevent the problem from getting worse or coming back.

If your cat doesn’t like their teeth brushed (and most don’t), you can help encourage them by getting cat toothpaste that tastes good and letting them lick small amounts off the brush. Once they’re used to it, they probably won’t fight quite as much, though it’s a rare cat that ever truly enjoys tooth brushing.

Another common cause of odor in cats is digestive issues. Digestive problems are relatively difficult to spot at home and will always need a veterinarian to confirm.

Look for things like your cat vomiting, diarrhea in their litter box, disinterest in food (or suddenly eating a lot more food), or suddenly drinking more water. These are all signs that your cat’s stomach might be bothering them, or that they might have other symptoms of digestive problems.

Fortunately, British Shorthair cats aren’t particularly prone to any digestive problems. They can be slightly inclined to getting overweight, though, so it’s important to keep an eye on your cat’s diet and activity levels, even when they’re healthy.

Another common cause of odor for all cats, but particularly cats with thick coats like British Shorthairs, is that they aren’t doing a very good job of cleaning their fur anymore. This is more common for older cats, especially seniors.

Since British Shorthair cats can be a very long-lived breed, they can spend as much as half of their lives as seniors, which is when this problem is most common.

However, if your cat was rescued as a kitten, or has other health issues, especially joint problems, grooming may be difficult.

If you suspect that poor grooming is the problem, you can do a lot of things to help your cat manage their fur and the corresponding odor. Mild grooming problems can often be addressed by regular brushing. Brushing once or twice a week is a good idea for British Shorthair cats in general, but more important if they’re having problems keeping their fur clean.

Brushing this way helps remove some of the excess furs, making it easier for them to keep themselves clean, and reducing their chances of getting hairballs.

If regular brushing doesn’t take care of the problem, try using a damp washcloth on the stinkier bits. Unfortunately, your cat is most likely to develop an odor on their hindquarters, leftover from going to the bathroom, and not being able to clean up.

Most cats are pretty sensitive about those areas, so they aren’t going to appreciate the help. But a damp washcloth will go over better than a bath unless you’ve been training your cat to accept baths.

Another common cause of the odor, even odors that aren’t bad, but that is noticeably different than your cat’s typical odor can be caused by vaccine-preventable infections and diseases.

Unfortunately, cats are highly vulnerable to many of the diseases that they are vaccinated against. There’s a good chance that if your cat is unvaccinated, your cat will, at some point, contract one of those infections.

If your cat is unvaccinated and you notice a change in their odor, it’s really important to take them to a vet. That way, the vet can check and make sure they don’t have an infection and can begin treatment early if they have contracted something.

Check Your Cats for Fleas and Other Parasites

Another cause of a change in odor, particularly in cats that go outside regularly, are ticks, fleas, and other skin parasites. That’s a particular concern in British Shorthair cats because their thick coats make it difficult to spot those parasites.

Fortunately, there are lots of treatments that will help you clear up fleas and other parasites. However, if you did notice a change in scent, you should also check your vet over carefully for infections around where you found any bites or active parasites.

If you’re still concerned after checking your cat over, consider taking them to a vet. The vet will be able to evaluate whether our cat needs antibiotics or, in extreme cases, if you might need to shave their fur to treat their skin. Fortunately, needing to shave their fur is rare.

We mentioned at the beginning that some cats seem to have more of a natural odor than other cats. That’s completely normal, so if your cat has a little bit of an odor naturally, you shouldn’t be too concerned.

There aren’t any specific reasons for a British Shorthair to have more of an odor than other cats, but interestingly many British Shorthair owners notice a little more scent from British Blues than other colorations of the breed. Reports are inconsistent, though, so take that with a grain of salt.

If you really can’t stand your cat’s scent and none of these tips help, you could try a catnip scented color or another mild scent that won’t bother your cat to help cover it. You should never use perfume, or even essential oils, on your cat without consulting a veterinarian first.

Many of the scents that people use for themselves aren’t safe for your cat, so if you do decide to scent their collar (don’t apply directly to their skin or fur), you should always make sure the scent is cat-safe.