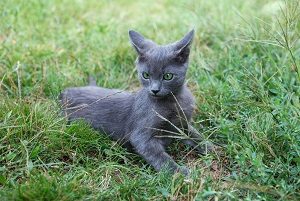 As a cat owner, you love your cat and want them to be happy. They are a great companion for you, but you might wonder if they ever want to meet their true love. Have you ever found yourself questioning, do cats mate for life?

Cats do not mate for life. A female cat can breed numerous times with different males when she is in heat during the same cycle. This can result in kittens in the same litter having different fathers.

You might have many more questions about cat mating cycles, and why they work the way they do. In this article, I’ll share some helpful information so you know what to expect from your kitty!

With all of this said, cats are certainly not monogamous animals. When male and female cats have not been neutered or spayed, they will continuously seek out mates.

Unless, as a cat owner, you choose to breed your cat repeatedly with a specific partner, the odds of cats finding the same cat again themselves are not likely. While cats certainly form bonds with each other, mating does not equate to monogamy in the feline world, especially if they live together.

How do I know if my cat has mated

There are different clues to look out for to tell if your cat has mated. First, if your cat is not spayed and has been around other cats, the odds are that it is a matter of when not if your cat will get pregnant. Cat mating happens very quickly, so there is a good chance you will not witness it happening.

If you suspect your female cat has mated, look out for behavioral changes and weight gain. Cats are only pregnant for about 60 days. In reality, you may not notice your cat is pregnant until they go into labor!

Some cats become extra affectionate when they are pregnant. Look out for your cat wanting extra belly rubs or attention as a sign they have mated. Additionally, cats tend to eat more while pregnant, so increased appetite can be another clue.

The only way to be truly sure whether your cat has mated is to take them to your veterinarian for an examination. If you suspect your cat is pregnant, this is the prudent thing to do to ensure your cat stays healthy.

Why do cats scream when they mate

The female cats scream during mating because the process is painful for them. This is true for the entire cat species, including lions and cheetahs. Male cats have barbs on their penis, which scrape the insides of the female during mating. While painful, this process induces ovulation for female cats. The process only lasts for a few seconds, but often cats mate multiple times a day while in heat.

How often are cat heat cycles

Female cats are in heat fairly often, which is why spaying your cat to prevent pregnancy is so important. Cats are in heat for about two to three weeks at a time. These cycles can last between five to twenty days, depending on if mating does take place or not.

Male cats are always ready to mate and do not have heat cycles. Typically cats are considered most fertile between January and September when there are longer daylight hours. Cats are considered very fertile animals, and reproduction can happen quickly and quite often.

What is the best age to neuter a cat

You should neuter your cat right around when they turn four months old. This is an essential time window because cats reach maturity at five months old. If you wait too long, you run the risk of your female cat ending up with an unwanted pregnancy.

Typically, the vet will recommend that you also have your cat up-to-date on their vaccines, and then they will move forward with the neutering process around four months. If you end up adopting your cat at an older age, you can still get your cat neutered. It remains just as safe for a cat to undergo the procedure at any age.

Why is it important to get my cat spayed/neutered

Unless you explicitly want to breed, getting your cat neutered is of the utmost importance for you and your pet’s health. Many repercussions come with a fertile cat, especially if you have a female.

As a pet owner, having a female cat in heat on the loose is a significant liability, especially if your cat has access to go outside. While you may try your best to keep your cat away from others, there might come a time where you are not around or can’t move quickly enough, and you will end up with a lot of extra kittens to feed!

Unlike some animals, female cats are in heat quite often throughout the year, so this is not a problem you can avoid as time goes on. For both male and female cat owners alike, neutering is the responsible thing to do for the  community and avoid even more animals ending up in animal shelters.

No, neutered cats are typically uninterested in mating; however, even for neutered cats, the instincts to mate and reproduce live on. While your cats may try to go through the motions of mating, they will not be able to have kittens. You may still observe some male and female behaviors, especially if they are around an unspayed cat.

If you get your cat spayed or neutered at the four-month mark, they usually will not show much interest in mating throughout their lives as they do not have any experience to draw upon.

Because cats have a reasonably short pregnancy, they can also get pregnant multiple times a year. They could have as many as seven litters a year. However, that is not considered healthy for your cat at all. Most vets would highly discourage you from letting your cat get pregnant too quickly after delivering a litter.

Similar to humans, pregnancy involves a lot of wear and tear on a cat’s body. It’s also essential to make sure your cat is healthy before getting pregnant again, or they may have a very high-risk pregnancy.

Do cats go through menopause

Cats do not go through menopause. Scientifically, menopause would not be possible because cats do not get periods as part of their reproductive cycle. Regardless, cats do not experience menopause because there is not an age where a female cat becomes infertile.

While over time, a female cat’s fertility might decrease, they continue to be in heat throughout their entire life if they are never fixed. Most cat breeders recommend that female cats stop getting pregnant around age five for maximum health.

It is not typically wise for older cats to continue to be allowed to mate. This is because older cats will run into more health problems and may face more complicated pregnancies. Often older cats who do mate will have smaller litters as well.

Cats certainly do not mate for life and will mate quite often if left to their own devices.

As a responsible cat owner, it’s essential to get your cat fixed to avoid unwanted pregnancies in the future. Cats are very fertile animals, and the odds of your cat mating are quite high. Even if you have a male cat, neutering remains just as essential to prevent negative behaviors from emerging as they reach maturity.

link to Why Do Cats Wiggle Before Pouncing - What To Know

Wiggling is just about the cutest thing any cat can do, or at least that’s what it seems like when you talk to cat owners. I love watching my cat get ready to pounce a toy or chase after one of my...

Continue Reading
link to Why Do Cats Like Shoes - Odd Behavior Explained!

My cats have always been naturally curious, which is a sign of happy, healthy felines, so I’m always happy to indulge in their exploration. But I’ll admit I was confused when I noticed that my...