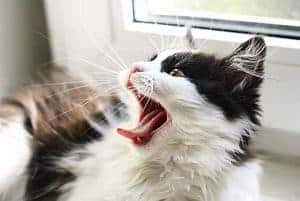 We love our feline companions, but they can be rather… expressive when they’re getting ready to mate and during mating itself. To the uninitiated, a cat in heat or caught in the act might seem downright loud. No courteously quiet roommates here. But why? Why do cats scream when they mate?

Cats scream when they mate because of painful scratching from a male cat’s barbed reproductive organs. Male cats may also yell in response to the female cat’s noises. The noise is a natural reaction to stimulation critical for ovulation and getting pregnant.

The exact reasons are relatively private, so we’ll explain them in more detail further down. This article needs to be fairly adult to be comprehensive, so keep that in mind as you learn the details of why this experience is painful for female cats. Getting your cat spayed/neutered should stop them from wanting to mate and get rid of noisy heat cycles.

Why Do Cats Make Loud Noises When Mating

There are a few loud noises that cats make when they are ready to mate and mating. Female cats tend to be much more vocal than male cats, but male cats also have particular calls and sounds that they make in response to vocal female cats.

If your female cat has gone into heat, chances are you’re already familiar with the loud trilling call they make for about a week at the height of their heat cycle. Some cats will get much louder than usual, while others are a little quieter and may only have a noisy day or two.

This trilling call usually increases when your female cat is ready to ovulate and is meant to attract Tomcats in the area to her.

Cats are simulation-based ovulators, which means that the cat’s ovaries will not release an egg without mating. Stimulation ovulators like cats also rarely get pregnant from the first mating, which is why female cats will often try to mate several times in only a day or two – multiple mating improves her chances of getting pregnant.

But, calling in males to mate doesn’t explain why your cat will often call or even make screeching noises while mating.

Those loud noises are because the male cat’s reproductive organs are barbed on the ends. Those barbs provide the stimulation your cat needs to ovulate, so they are an essential part of the process. However, many people theorize that the extra stimulation isn’t comfortable for your female cat, which may be why Queens often get aggressive with male cats immediately after mating.

That aggression is also why Tomcats will usually leave a Queen alone after mating until/unless she starts making mating calls again.

How Do Female Cats Act After Mating

Female cats can seem very strange right after mating. They have a wide and varied combination of behaviors that may all be entirely out of character at any other time but happen every time they mate.

It’s important to remember that your female cat is very unpredictable after mating. She may even be more aggressive with you until she’s had some time to calm down, so it’s best to approach a recently mated Queen with caution.

Female cats will often actively scare off a Tomcat that sticks around too long after mating. That’s because she needs some time to react to the hormones released by the initial mating, and because it takes a little while before she’s ready to mate again.

Once the Tom is gone, most Queens will go back and forth between grooming themselves, including their private parts, rolling around, and calling. She may seem to move oddly quickly between different actions, in part because of those same hormones flooding her body and confusing her.

However, this frantic period often passes reasonably quickly as the Queen gets ready to mate again. Most Queens will try to mate 3-4 times over 1-2 days. They might be ready to mate again in as little as 30 minutes and will start calling to attract the Tomcat again.

However, cats usually aren’t picky about who comes to mate when they are ready, so it’s common for Queens to mate with multiple males if more than one is available. A single litter of kittens may have several fathers.

Why Do Female Cats Roll After Mating

This behavior isn’t always clear. It’s a reaction to mating and the hormones associated with ovulation, of course. Still, rolling behavior could be a way to relieve tension, spread her scent in an area, or even a way to try and get rid of the scent of the Tomcat in case a different male cat is also interested in mating.

While there are many possible explanations for why female cats roll after mating, one thing is sure: it’s an entirely natural response to mating and not something you need to worry about.

How Long Does it Take for Cats to Mate

Cats mate incredibly quickly. That’s a good thing for them since neither animals wants the process to take too long, and mating can leave wild cats relatively vulnerable.

For most cats, mating will be over in under a minute, though it can occasionally last longer. You may also notice your cats in mating position longer if a fixed male tries to mate with an intact female, though not always.

Do Cats Stay in Heat After Mating

There isn’t a clear-cut answer to this one. Mating will not take a cat out a heat immediately, but she will probably get out of heat within a couple of days of mating successfully.

Since mating triggers ovulation, your cat’s body will naturally move into the next phases of their hormonal cycle, pregnant or not, as long as ovulation happened. Cats that are pregnant will continue to deal with those hormonal changes throughout their pregnancy and will not go back into heat while pregnant.

However, it can take several days before your cat completely exits their heat cycle, and your cat likely won’t be calmer the same day they mate since they want to make several times in a row.

It’s also important to note that your cat likely won’t take any longer than usual to go back into heat after mating. The cycle may end sooner, but they’ll still be back in heat two or three weeks later.

If you are a breeder (or your cat accidentally got pregnant before you could get her fixed), it’s also important to know that female cats can become receptive to mating and get pregnant while they are still nursing their previous litter. It’s incredibly hard on their bodies when that happens, but it does happen without careful management and segregating un-spayed nursing Queens from mature Tomcats.

Why It’s Important to Spay/Neuter Your Cats

This article is intended to be an informational article because there are plenty of people out there who do breed cats responsibly and well, and plenty of other people who are interested in getting into the cat breeding business.

However, the vast majority of cat owners should spay/neuter their animals. There is an overpopulation of cats and kittens, with many more kittens born every year than there are homes for them.

Some of those kittens go on to be intact stray cats and feral cats, and a mother cat can have as many as five litters of cats per year. Assuming just three kittens per litter, that’s 15 kittens every year from just one stray Queen. Toms can have even more children in a year since they don’t have to wait for heat cycles and the end of pregnancy.

Lastly, female cats especially are vulnerable to illness in their reproductive organs, including a potentially fatal infection of the uterus. The infection, called pyometra, is fast-acting and requires aggressive treatment. We know from experience that taking care of a cat with pyometra can be difficult and that it’s easy to miss the early signs of infection until it’s progressed too far.

We know you want to keep your cat as safe and healthy as possible, so it’s important to know the signs and symptoms of pyometra or get your cat spayed before it happens to her.

You can responsibly own an intact cat, but it’s more work than owning a fixed cat. It would be best if you made sure there aren’t any opportunities for your intact cat to get out, for starters. You also need to keep intact cats segregated by sex during heat cycles to prevent accidental breeding.

If you want to breed cats, try contacting a local cattery and see if they are willing to tell you about their business and teach you the basics. You should also find a cat registry or breeding program you can sign on with that provides training for you and care standards, so you have the resources you need to give your kittens the best start in the world.

Lastly, and most importantly, if you choose to keep intact cats for any reason, you need to be prepared to find good loving homes for any kittens that result, accidental or intended.