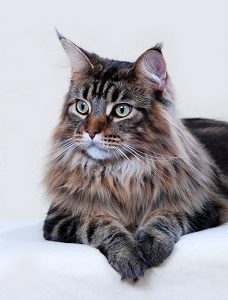 Maine Coons are known for being friendly, gentle, and playful. They are also known for being big. This combination makes these cats recognized as the largest breed and correctly nicknamed the “gentle giant.”

Maine Coons do have big paws. They are large cats, known for having an extra toe. Their origins and body structure leads to their large paw size.

Their paws are much larger than an average cat’s paws based on their body alone, but there are other interesting features, and lore, that give this cat their big paws.

The Body Structure of a Maine Coon

Just like people, cats have different bone structures that make them look the way they do.

Maine Coons are the largest breed of cat. The past two Guinness World Records for largest cats have been Maine Coons. The average size of an adult Maine Coone is typically around 10 to 16 feet in length and can weigh between 8-18 pounds, depending on the gender. Males tend to weigh more.

The body structure of Maine Coons is what gives them their rugged and robust look. They have larger bones, squared features in the head and face, and a rectangular body. They are broad in the shoulders, and solid muscle tones give this cat a dense look. These features make Maine Coons unique; when evaluated, these cats earn points on how squared or robust the body structure is.

Also, Maine Coons will just keep growing! Not forever, but their average time to reach maturity is twice as long as an average housecat.

Because of these features, Maine Coons are just big cats, which includes their paws. Their paws are large and round with tufts of fur. It’s theorized that this is because of their origins.

Cat’s paws are arguably one of the cutest parts of a cat. Their tiny toes and round shape make people want to grab them. However, most cats draw away quickly or put up a fight. This is because a cat’s paw is more sensitive than the rest of its body.

Although the pads are tough, they are full of nerve endings that help the cat get a sense of their world around them. So they can walk on rough surfaces, but can still recognize if the surface is too hot or too cold. They also have sweat glands that help them regulate body temperature and scent glands that help them mark their territory. So if you ever see your kitty scratching, they are probably marking their scent.

Their claws are curved and retractable, which makes it easy to grab and climb up trees. Claws are essential for scratching, catching prey, playing, and self-defense.

Why do Maine Coons Have Extra Toes and Big Paws?

Maine Coons were originally hardy seafaring cats from Maine. The coastal environment was rich with sailors and seafaring families. So, Maine Coons were prized because of how useful they are on ships. They are working cats and can catch their food, climb well, and catch mice that would eat the food that was on board.

The snow also had an impact on how Maine Coons developed their paws. The large amounts of snow were hard to walk through, but Maine Coons had adapted wide set paws to act as snow shoes. This made it easy to walk on top of the snow covered-ground, without sinking in. The tufts of fur on the padding of the paw made the paw insulated, so the cold was kept out.

What Does Polydactyl Mean?

Another reason Maine Coon paws are so large is that they are known for being polydactyl.

When a cat has an extra toe or mitten paws, they are polydactyl. Typically, cats have five toes on each front paw and four on each back paw, for a total of 18. However, a polydactyl cat will have extra toes, usually on the front paws. It is rare to see them on the back paws and even more rare if a cat has all four paws with an extra toe.

A polydactyl cat usually only has one extra toe on the side of the paw where the declaw is, or the claw does not touch the ground. Often, it is only one toe that is extra, but sometimes there can be more. That being said, there is only so much room for extra toes, so it’s unlikely that there would be more than two.

Maine Coons were early pioneers of this genetic mutation, making their paws even bigger than usual. This was a prevalent trait. Sailors thought these cats brought good luck. Not only were they lucky, but they also were able to catch mice that got on board ships.

One sailor gave the famous author Ernest Hemmingway a polydactyl cat, which was later named Snow White. Already an avid cat lover, Hemmingway fell in love with the extra-toed kitty.

Several people today still find these types of cats cute and unique. It is a trait that is getting less common and additionally is not accepted by most cat shows. The Maine Coon breed standard states explicitly there should only be 18 toes.

What Do I Do If My Maine Coon is Polydactyly?

Just because a cat is polydactyl does not mean it is unhealthy. The genetic mutation is generally harmless. An extra toe or two is not going to affect the quality of life of your Maine Coon. That being said, it might be a bit easier to get tangled up in blankets.

Extra claws need additional surfaces to scratch on. Provide your kitty with enough scratching posts and other surfaces to make sure they can take care of themselves. When clipping your Maine Coon’s nails, don’t forget the odd one out!

The Hidden Dangers of Polydactylism

Sometimes, there are risks of extra-toes. The gene in charge of producing extra toes can affect other areas of a cat’s body. For example, that genetic mutation can also cause the underdevelopment or complete absence of the major bone in the arm.

Other times, there can be a complete absence of a nail, or the nail could grow oddly, too curved, or other various twists. If not taken care of, these can puncture the cat or cause discomfort walking.

Keep an eye on your Maine Coon to make sure they are not in pain or discomfort.

Maine Coons have had countless records as the largest cat breed. Their squared bone structure gives them a rugged and robust look. Their big-boned body also includes their paws. Although their paws are naturally large, they have also been developed to endure harsh Maine winters. Large paws, padding, and insulation help them walk along with the snow, like snow boats.

Polydactylism is also common among Maine Coons. The genetic mutation gives Maine Coons an extra toe, so their paws look even bigger than before. Generally, this is harmless, but make sure you are taking extra care when trimming your cat’s extra nail and give them plenty of places to scratch.

link to Why Do Cats Like To Sit On Plastic Bags - What To Know!

If you’re a cat owner or cat lover, you’ve probably noticed that cats will sit anywhere. This is why there’s a common phrase, “If I fit, I sit.” From boxes to baskets and everything in...

If big kitties are your thing, then you might want to take a look at a Maine Coon. Weighing in between eight and eighteen pounds; that’s a whole lot of cat for the legs to hold up. But how sturdy...