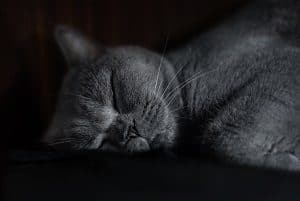 You’ve always wanted another cat. You love your Russian Blue cat, but you also work a lot and know that your cat might be happier with a friend. But the thought of introducing a new cat into your house seems daunting. How will your Russian Blue cat react? Will they fight? What if your Russian Blue hates the new cat, and they never get along? So the question becomes, do Russian blue cats get along with other cats?

Russian Blue cats get along well with other cats. They are an amiable breed by nature and adjust well to other animals. Matching temperaments cats is vital to their overall companionship.

As scary as it may be when you decide to get a new cat, you don’t have much to worry about when it comes to Russian Blue cats. The breed is generally friendly and gets along well with other cats. Even if you have a few hiccups in the beginning, I’m sure your Russian Blue will come to enjoy having another cat in the house. Let’s discuss your Russian Blue a bit more so you can prepare.

What Is a Russian Blue’s Temperament

Russian Blues are a friendly breed but often quiet and even shy. Sometimes, some people call the Russian Blue an aloof breed, but that might be a stretch. Just because a cat doesn’t come out to greet everyone doesn’t mean it isn’t friendly.

If you’re the owner of a Russian Blue, expect a lot of love from your cat. Russian Blues are loyal and loving to their owner. Often, a Russian Blue will cling most to one person (which, let’s face it, is probably the one who also pops the cat food can open in the morning).

Active but gentle, the Russian Blue cat makes a fantastic addition to your family.

Russian Blue cats are not an aggressive breed. Russian Blue loves people, children, and other animals. Just make sure that you properly introduce your Russian Blue to new people. You wouldn’t want a stranger coming into your house without saying hi, would you?

How Can I Make My Russian Blue More Friendly

Cats are different than dogs in that they’re not as easy to train. If your dog growls at strangers, it’s simple enough to start to train him not to do so. Cats… not so much. But that doesn’t mean you can’t help your cat become more friendly.

Does My Russian Blue Need A Companion

When you head off to work every morning, you probably can’t help but wonder if your Russian Blue is lonely while she waits for you to come home from work.

Surprisingly, Russian Blue cats are great at entertaining themselves, so as long as there is something for them to do at your house or apartment, it is safe to say that you don’t need to have a companion for your Russian Blue.

However, if you want a second cat, there’s no reason not to get a second one, whether it is a Russian Blue or another breed. Just make sure you introduce your cats properly to avoid any problems.

How Do I Introduce A New Cat to My Russian Blue

It’s always scary adopting another cat. Will, your cat like the new cat? Will fights break out? Will you perpetually be yelling, “No kitty!”?

A lot of the future depends on how you introduce your new cat to your Russian Blue. Hint: It won’t be a bright future if you suddenly throw a new cat into the mix.

When you have a new cat, make sure to introduce your cats slowly. Give both cats the space to run and hide if they seem afraid. If they both have their own areas, they will feel safer than if they’re forced to be together.

What Do I Do If My Cats Fight

No one likes it when their cats fight. It’s scary. And sometimes, it’s hard to prevent. Here are some tips if – heaven forbid – your cats begin to fight, whether they have just met or have lived together for years:

As bad as it sounds, if no one is getting hurt, let them fight. A small fight can show the cat’s boundaries. But again, if it is severe, take action to stop the fight.

The hard truth is that sometimes cats don’t get along, but that doesn’t mean you did anything wrong as a cat mom (or dad).

I’ve also had cats that don’t get along, even though they’ve lived together for years. But cats usually don’t go out of their way to fight with each other. My cat, who is the “hated” cat, knows to stay from the cat does not like it. Alex knows that if he walks with his tail up near Macy while Macy is on the couch, he’ll get swiped. So he doesn’t do it. Cats learn so you won’t feel like you always need to intervene.

What Cat Toys Can Cats Play With Together

Whether your cats get along like family or fight (also, like family), you should consider getting toys that the cats can play with together.

These toys make for great multi-cat play, but I know you’ve seen it before. One of your cats begin to kick around a ball with a bell, and another cat inevitably comes running to investigate. So really, any toy (or sock or crumpled piece of paper or pen cap) can become the hottest cat toy.

Are There Products That Can Help Calm My Cat

Maybe your Russian Blue cat isn’t as calm as you thought it was. Russian Blue cats are known to scare easily (and some may stay scared), but there are products on the market to help calm your cat.

Sometimes being timid or fearful are just a part of your cat’s personality, and you’ve got to accept that too.

Although Russian Blue cats don’t need companions, Russian Blues are friendly and enjoy being around other people and pets. They have a dynamic personality, so another feline friend might help them expend some of that crazy energy. Because you know the claws may come out when your Russian Blue gets bored (and it won’t be the scratching post that gets destroyed).