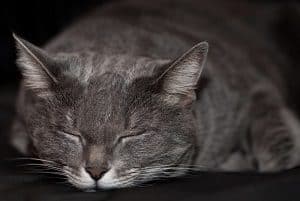 Russian Blue Cats are not a rare cat breed in the United States or around the world. Russian blue cats are growing in popularity and can be found at most reputable breeders.

It’s just a fact that some cats are more common than others, and just because you don’t see Russian Blues in every alley doesn’t mean they’re a highly rare breed. Even so, Russian Blue cats are beautiful and unique with their “blue” fur and bright green eyes. Let’s learn a little more about the Russian Blue (perhaps elusive but not rare).

What Color is a Russian Blue Cat

Indeed, the fur on this cat isn’t bright blue like the sky, but it has hints of blue. The Russian Blue cat is silver or a slate grey but can look slightly blue.

I would describe it as a “silvery blue” tone. You wouldn’t think that a cat could be “blue,” but the Russian Blue has a unique color that comes through more in person than in photographs online. In pictures, the fur often looks grey but can have a variety of tones when you see one in the flesh.

The Russian Blue cat is known for the color of its fur, but the cat itself doesn’t have any other extremely unique features.

The Russian Blue is a medium-sized cat that averages around ten pounds. The fur – we already talked about the color – is short. You probably won’t find a Russian Blue with long fur. Its fur is also dense and feels like you’re petting a plush carpet, not a cat.

Russian Blue cats do, however, have one other striking feature: their emerald eyes. This breed isn’t the only cat to have green eyes, but the slate grey color of their fur may make their eyes look even brighter.

What Kind of Personality Do Russian Blue Cats Have

Russian Blue cats are loving and devoted to their owners. They are slightly timid, so they may be afraid of strangers or new people that you may have around the house.

The Russian Blue also isn’t a cat with a loud voice. Some cats meows can be equated to “screaming,” but the Russian Blue is much quieter and has a softer meow than other kinds of cats.

They also like a quiet, comfortable environment, like many other cat breeds. Surprisingly, though, the Russian Blue may be up for a game of fetch with a cat toy. Try tossing one of its toys and see what happens!

So Why Do People Think They’re Rare

This is a difficult question to answer.

First, the Russian Blue did not originate in the United States, which sometimes causes people to think that it is rare. The Russian Blue is believed to have come from northern Russia before being brought to England and Europe in the 1860s to be bred.

Before the 1960s, Russian Blue cats were not popular in the United States. Like other goods coming from Europe, these cats needed to be transported to America to be bred. Even before the 1960s, however, there is no indication that the breed was rare.

During the 1960s, you could pretty much find a Russian Blue in many households. As the cat lost popularity over the years, less ownership was visible. Fast forward to today and this cat is trending upward again.

It’s no surprise that some cats are more common than others. Other cats, like the Russian Blue, are less common, but by no means are they rare. You can easily find them at an adoption shelter as well as reputable breeders.

Uncommon Vs. Rare: Which Is It

Russian Blue cats may have simply been – and maybe still are, to some degree – an uncommon cat breed, and people began to use “uncommon” and “rare” interchangeably when they do not mean the same thing, especially when it comes to a breed of cat. If a cat is not in high demand, that does not mean that the breed is suddenly rare.

Today, there’s no shortage of Russian Blue cats in the United States or around the world. If you’re looking to adopt or buy a Russian Blue in the future, worrying about hunting down the breed shouldn’t be one of your biggest concerns.

Just because a cat is grey or slate grey doesn’t automatically mean the cat is a Russian Blue. Russian Blue cats have specific genes that are not the same as a regular grey cat. A Russian Blue cat and a grey cat might look similar, but they will not be identical, especially when it comes to the fur color.

Look closely. Do you see that blue tone to its fur like the Russian Blue? Does the cat have those emerald green eyes? If not, you might be dealing with merely a grey cat (not that there is anything wrong with it).

Some other gray cats commonly misidentified as a Russian Blue include:

A simple image search of any of those breeds and you might find yourself wondering if it was mislabeled.

How Much Does a Russian Blue Cat Cost

So you’ve decided that the Russian Blue is for you. But just how much will a Russian Blue cost you? Well, the answer isn’t so simple.

If you’re looking for a Russian Blue from a breeder, you may be looking at a cost anywhere from $800-$2,500, based on several factors:

It’s at this point you need to be careful. Some breeders might try to convince you that this cat is rare and you can’t find it anywhere else. Not true, you can find plenty of Russian Blue cats in your area.

Remember: you would be paying these prices for a Russian Blue because you’re buying from a breeder. Breeders set their prices for cats, so they can charge as much as they would like.

In addition to buying from a private breeder, you will also be paying for the cat’s pedigree. The better the pedigree of the cat, the higher the price will probably be for the cat. It’s no different than buying an expensive dog from a dog breeder. A person can spend hundreds of dollars on a Yorkie, and another can spend hundreds on a Russian Blue.

Overall, these prices aren’t necessarily high because the Russian Blue is a rare breed.

Can I Find A Russian Blue Cat At A Shelter

If you don’t want to shell out a few hundred dollars for your family’s new pet, you have options, like adoption. And, to be honest, I would encourage you to check your local animal shelters. The only downside of adopting (not shopping) is that you can’t guarantee that you’ll find a Russian Blue cat when you go. You may also not get an entirely bred Russian Blue.

If you happen to find a Russian Blue looking for a home in a shelter, you will only be paying the adoption fees, which will be considerably lower than buying from a breeder. Plus, you’ll be giving an animal in need of a loving home.