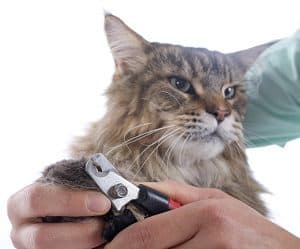 Cats like nail files due to instinct. Nail files help file down their claws and they enjoy the feeling. Other reasons might be because of a mineral deficiency. Cats also enjoy the texture of nail files and the sound it makes when they claw it.

As you can see, there are tons of reasons why cats like nail files. Let’s dive into a few of those in more detail below.

As odd as it is, there are various theories as to why cats like nail files. Some speculate that it’s because of a mineral deficiency. As quirky as they are, cats generally don’t do something unless they’re instinctually drawn to it. Fingernails contain calcium, iron, magnesium, zinc, and phosphorus; therefore, if your feline’s body is lacking any of these minerals, it’s entirely possible that she would start to crave it – and try to get it where she can. Including an emery board!

Another speculation as to why cats like nail files so much are for the same reason that they like scratching posts. Again – cats are instinctually driven. They like scratching posts so much because their claws, in essence, crave getting filed down. And, conveniently, nail files serve the same purpose, so it’s possible that cats like nail files because they recognize them as something to help grind down their sharp claws.

Other people think that cats like nail files because of the texture; you may have noticed that the material is very similar to a cat’s tongue! They may enjoy the strange feeling of a rough tongue on a coarse nail file (if only we could know what that feels like!).

But in general, this does bring up other questions: is it okay to use a nail file on your cat’s claws? Is that what scratching posts are for? What happens if you never trim your cat’s nails?

Can I Use A Nail File On My Cat

You can use a nail file on your cat. The emery board is not bad for his claws, and, since claws are very similar to fingernails, a nail file would work on your cat’s claws. He might even like it – since cats are so strangely attracted to nail files!

However, you don’t necessarily need to file your cat’s claws down; but if you trim them, a nail file will help soften out the roughness.

Can I Use A Nail File To Keep Cats Claws Short

You certainly can use a nail file to keep cats claws short. However, keep in mind that most cats do not like having their paws touched (or being held for a long time). So it may be challenging to use a nail file on your kitty’s claws.

Plus – if you want to cut your cat’s nails, it’s generally better to use a nail trimmer or clipper rather than a file. This offers a more comfortable, clean-cut for Kitty’s claws (and makes the process quicker, which he’ll be grateful for!).

Instinctively, cats claw at scratching posts to help keep their nails groomed and healthy. And of course, it’s much better to have a designated spot for scratching to prevent your clawing feline from tearing up your furniture or carpets!

Therefore, find a scratching post that will help file her nails with every use; not all of them do! Avoid posts covered in carpet, and instead, offer her a post made of heavy-duty fibers like sisal or corrugated cardboard.

Additionally, keep in mind that you may need to put in some training time when introducing a scratching post. She may have gotten so used to tearing up the furniture; she might need to learn about the new system you’ve put in place!

Do Nail Grinders Work For Cats

Nail grinders are effective when it comes to a cat’s claws. It’s essential to keep your kitty’s nails groomed, trimmed, and healthy regularly. The good news is that most cats take care of their nail health on their own (it’s why you see them scratching on posts and carpet and furniture). But some still need assistance in trimming.

Keep an eye on your feline’s little pincers; if they seem too long or overgrown, he may need some help with claw maintenance. The actual trimming and cutting process can be very stressful; however, cats generally don’t appreciate it – or sit still for it. So nail grinders are a great alternative!

They grind nails down with a head that rotates at high speed; they run on a low hum, which cats generally adjust to easily. They also make it easier to avoid hitting your kitty’s quick (the pink part of the nail, where the nerves and blood vessels lie).

How Do You Keep A Cat’s Claws Dull

You can best keep your cat’s claws dull by providing easy access to scratching posts around the house. If needed, you can also offer claw grooming for your kitty too.

Dull claws generally cause less damage than the sharper ones. Plus, cats instinctively want to keep their claws from getting too long or sharp; it’s just like how humans feel the need to cut their nails when they get too long!

Give your feline fur baby her own scratching post to help her keep her claws dull. If you have multiple cats, give them each a scratching post plus an additional one. Cats tend to be territorial, so having their own posts will better encourage them to use it.

If you’re still worried about her claws getting too sharp, monitor them and trim if needed (but generally, and fortunately, cats can take care of their claw length on their own!).

What Happens If You Don’t Trim Your Cat’s Nails

If you don’t trim your cat’s nails regularly, they could get too long and, eventually, curl into his paw pads. Keeping claws trimmed will prevent ingrown nails; reduce property and furniture damage, and help keep Kitty calm and less aggressive.

Your cat will likely be able to keep his claws trimmed on his own with, for example, a scratching post. But if for some reason he can’t, you’ll need to help by cutting or grinding them yourself.

An alternative? Cat caps! These plastic caps are glued onto claws and help protect anything in the line of fire of a sharp claw (like furniture). This method is safer than declawing because cat caps stick with a cat’s claws and don’t prevent their natural growth.

The 3 Best Nail Files for Cats

Are you seeking a good nail file for your feline? We’ve got three great options.

This grinder is excellent for skittish cats and kittens, as the motor is quiet, and the grinder cuts through smoothly without moving too fast. Plus, it has two speeds to accommodate your kitty’s preferences better. And – best of all – it’s wireless for easiest maneuverability!

Because this is a two-speed electric grinder, it’s much quicker and easier to file down claws than a manual clipper – it simply sands down the nail. It’s lightweight, humane, and it’s also wireless; this makes it that much easier to move around Kitty’s paws.

Though grinders typically offer a better and quicker experience overall, some cats get uncomfortable around the loud grinding noise. If this is the case for your kitty, nail clippers work well too!

These clippers are even more effective than traditional nail clippers because of the durable spring built-in. Because of the spring, it only requires a light squeeze for a clean cut. The blade is sharp for quick trims, and the handles have a firm rubber grip to prevent slipping!