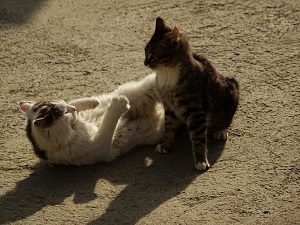 Cats slap each other because they are playing or they are defending themselves. Slapping is a mild aggressive behavior and signals the cat is experiencing fear. Cats also show dominance through slapping.

And if only one cat seems to be doing the slapping, fear not: he may be merely trying to instigate a play fight.

On the other hand, sometimes, the slaps are less friendly and more aggressive. Cats are quick to defend themselves, and if they’re ever under any perceived danger, their instincts kick in, and the claws come out. If you’re not sure which is happening – a lighthearted romp or a violent brawl – pay attention to the other behaviors. Let’s take a dive into what slapping truly means for cats.

What Does It Mean When a Cat Slaps Another Cat

Generally, if your slap-happy kitty is in a playful mood, she’ll find a friend and try to instigate playtime. And hey, playing is a great way for cats to exercise, release energy, and bond with each other. So if things seem more or less compliant among the two, let them enjoy their mischief.

However, sometimes when a cat slaps another cat, it’s more of an act of fighting; it could also be about dominance. Cats are driven by instinct; so, if they feel the need to establish their authority over a fellow fur ball – brace yourself for the slaps.

Try to discourage this behavior if possible; it can lead to bullying and hostility among the household.

Hissing and scratching, of course, are key indicators that things may be getting out of hand. Otherwise – let them have their fun! But this does pose other questions: should you stop your cats from play fighting too much? How can you get your cat to stop attacking its “siblings”? Do cats get jealous of other cats?

Why Do Cats Slap Humans

Cats might slap humans for various reasons; it may be to get your attention or stop you from doing something you’re currently doing.

Some cat owners complain that Kitty slaps them in their sleep or while they’re trying to work – which could be a sign that he’s bored or wants food.

Cats may also slap humans to stop a certain behavior, rubbing his belly, for example? How dare you!

Try giving him additional attention and playtime throughout the day. You may find that the slaps subside.

Why Would My Cats Suddenly Start Fighting

Sometimes, cats suddenly start fighting out of nowhere because of something simple – like a misperception or miscommunication (cats have those, too!).

Have you ever seen two of your normally well-behaved fur babies unexpectedly start to duke it out between themselves? Because cats are so instinctively driven, even the closest of friends may experience the occasional tiff. For example, if one of them did something the other perceived as a threat, best friends could instantly turn into worst enemies.

Or, perhaps Kitty got triggered by something outside (another cat, a loud noise, or any other “threatening” experience); if the other cat is nearby, he may associate the experience with that cat … and so the flighting ensues.

Don’t let this scare you; however: cats are typically able to forgive and forget.

Why Do Cats Hit With Their Paw

Just like we use our hands for most endeavors, so too do felines with their paws.

The “hit” may be frisky – an effort to incite playtime, for example. It may also be a result of attention-seeking. Alternatively, it could be aggressive.

How do you tell? The easiest way is to judge by his body language. If he seems uptight and combative, he’s likely looking for a fight. Otherwise – he’s just being a cat!

Do Cats Get Jealous of Other Cats

Cats can certainly exhibit signs of jealousy from other cats; however, the “jealousy” that it appears may merely be signs of territorialism.

To keep your kitty hostility at its most minimal, make sure there’s enough of everything to go around: toys, scratching posts, litter boxes, and – yes! – attention.

How Do You Tell If My Cats Are Playing or Fighting

You can most easily tell the difference between playing and fighting by your cats’ body language.

If the behavior is hostile or aggressive, you’ll be able to tell even before the brawl begins. Before getting into it, cats will try to make themselves look larger by puffing out their chests, curving their spines, and raising their legs.

During the fight, they often show signs of:

However, if it’s merely playful, the scuffle will look much more innocent. Cats don’t seem nearly as distressed, and their noises are more grunt-like than vicious. Also, if they’re taking turns dominating or getting on top, that’s a sure sign of good, clean feline fun.

Should I Stop My Cats From Play Fighting

If cats are truly play fighting, let them keep going!

Play fighting is most often exhibited between littermates, as they generally have the strongest bond and best understand each other’s social cues. But it can still occur between stepsiblings!

Overall, play fighting is very healthy for cats and kittens of all ages. Particularly for indoor cats, it helps get out pent up energy; it’s good exercise; it’s instinctual without being negative, and it allows kitties to bond.

The most common reason that cats get aggressive toward one another is due to a dispute in territory. Therefore, the best way to get your cat to stop attacking your other cat is to ensure that there is enough of everything.

Often, when a new cat is introduced to the home, the other one (or ones) get territorial over objects or space. So, first of all, ensure that there’s enough of everything so that each cat gets their own – plus one.

When introducing a new feline fur baby to the mix, do so slowly, carefully, and meticulously. It’s best to follow these steps to help ease her into the family:

Getting used to new siblings takes time; don’t get discouraged, and do try to have patience in the process!