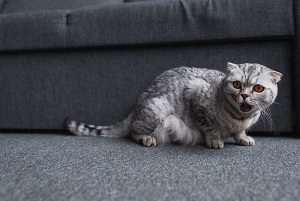 If there’s one thing you can’t stop, it’s sneezing. Whenever you sneeze at home, you realize that your cat comes running to you. Or maybe your cat attacks, which is entirely out of the ordinary. Your cat could even meow back at you expectantly. So, why do cats meow when you sneeze?

Cats meow when you sneeze because they are responding to the noise they just heard. Most sneezes are sudden and loud, which can startle cats. A cat’s reaction can range from attacking to making noise in response.

Not all cats react the same to sneezing, so you may see everything from meowing to attacking. Other cats might just run away from the room after you sneeze. If your cat isn’t in the room, they may run in like you call them in response to a sneeze. There’s no specific explanation as to why cats react the way they do to sneezes, so let’s discuss some of the ways that your cat may respond and what it might mean.

Why Does My Cat React When I Sneeze

Your cat reacts to your sneeze because it is a sudden, loud sound that may startle them into some reaction. How they react may differ depending on the cat, though. Your cat can do anything from run away to attack you.

Sneezes are loud for other people to hear, but then think about what your cat must hear. Cats’ ears are sensitive to sound, so a loud noise like a sneeze will startle them. Plus, the sound is sudden. You know that a sneeze is coming on, but your cat doesn’t.

When you think about your sneeze that way, it’s no surprise that your sneeze spurs your cat into action. However, that action is probably going to depend on the personality of your cat, so make sure to stay on your toes!

Why Does My Cat Attack Me When I Sneeze

When you sneeze, there is a possibility that your cat thinks you are its prey.

Your cat attacking you may be playful or a little more aggressive, depending on the personality of your cat. If your cat is good at hunting, then the attack may be a little more violent than a cat who is just trying to have some fun.

Why Does My Cat Cackle When I Sneeze 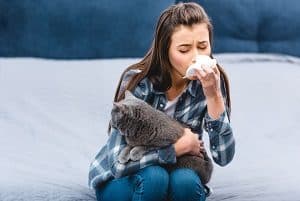 Your cat may make a cackle noise after you sneeze because it reacts to the noise you just made.

Humans can make some strange noises, and so too can cats. When you sneeze, your cat might cackle in response. There’s no definite answer as to why cats do this, but we can do a little bit of brainstorming.

Next time you sneeze around your cat, who cackles in return, see how close they got to making the noise you just made.

Why Does My Cat Run Away When I Sneeze

Your cat runs away from you when you sneeze because you startled your cat.

Okay, let’s picture this. You’re taking a peaceful nap in the afternoon sun. You finally found the perfect comfortable position. The house is quiet, and you’re completely relaxed. And then—“ah-choo!” You’d probably go running too.

Your cat bolting from the room you sneezed in is a common reaction to getting startled by the sudden loud noise that your cat wasn’t expecting. Your cat didn’t know what the noise was or didn’t expect it, mostly if your cat was in a deep sleep. But don’t worry. I’m sure your cat will be back before you even stop sniffling.

Why Does My Cat Chirp At Me When I Sneeze

Your cat may think you are prey when you sneeze.

Your cat knows that you aren’t a bird or a squirrel, but if your cat is an indoor cat, your cat might not know what these wild animals sound like. To your cat, your sneeze could perhaps sound like one of those animals they watch in the window.

Your cat might not know precisely what kind of animal is making the noise he just heard, but his instinct tells him that he should chirp at it.

Why Does My Cat Come To Me When I Sneeze

Your cat comes to you when you sneeze because your cat thinks you are hurt.

Your cat may not know exactly what a sneeze is or does for humans, but your cat might think that you are hurt when your cat hears you sneeze. Therefore, your cat will bolt into whatever room you’re in. Your cat might not stay long and is just coming in to see if you are okay. Since your cat cares about you, she wants to make sure that you’re doing alright. There’s a bond between you and your cat, so even a sneeze could be concerning to your cat.

Now, if only everyone would be so courteous when you sneeze!

Of all the noises that you could make around your cat, sneezing is undoubtedly one of the sounds they may like the least. Cats hate sneezing.

If you’ve ever sneezed in front of a cat, you know that they may react strangely or in a multitude of different ways. Let’s gather up 10 of the top reasons why cats hate sneezing.

Even if cats seem to always react to sneezing, that doesn’t mean they like it. As you can see, cats have plenty of reasons to hate sneezing!

The age-old question of why your cat reacts to your sneeze in different ways is one that does not have a definite answer. Since all cats react differently, it’s hard to know what exactly your cat thinks after you sneeze. One thing is for sure, though: at least your cat will always know when you’re feeling under the weather!

So as you can see, cats are very responsive creatures. Sudden noises, especially something as loud as a sneeze is enough to get a reaction out of them. The meowing as we’ve discussed is mostly out of fear, but there are times it can be because your cat is annoyed. Whatever the case, try to limit sneezing around your cats if you can. This will help keep you both happy!