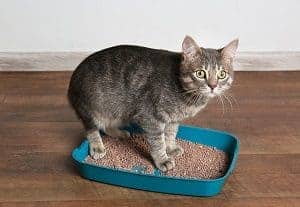 Perhaps the least pleasant aspect of owning a cat is knowing you’ll have to deal with the litter box. The area is your least favorite part of the house. So why does your cat spend time there, not just relieving themselves, but playing around? They dig, roll, and sometimes hang out in the grossest place in their home! Is this normal? Is something wrong? Why do cats play in the litter box?

Regardless of whether it is expected, playing in the litter box can be a habit you want to break or at least lessen. In this article, we’ll break down the kitty’s mentality behind this strange behavior and how to curb or eliminate it. After all, wouldn’t they rather be playing with their toys? Or literally anything else?

Why Does My Cat Spend Time In The Litter Box

There are several reasons your cat could be playing, sitting, or rolling in their litter box. The main reasons are:

Has there been a significant change in your cat’s life recently? Have you moved, welcomed a new family member, or gotten a new furry friend? If a cat suddenly feels like their home is being challenged, they can turn to their litter box, as it may feel like its the only thing that belongs to them, and likely a place where they won’t be bothered. Additionally, sitting in the litter box causes a cat’s scent glands to be left in the spot, which is another way of claiming the box as their own space.

Similarly, changes in routine may give a cat anxiety. Loud noises or strangers can get a kitty’s heart pounding. They consider their litter box a safe place and may seek out shelter there.

Cats can be prone to urinary problems and diseases that affect their ability to relieve themselves. Suppose your cat seems to be trying to urinate unsuccessfully.

In that case, it could be a sign of a urinary tract infection, kidney stones, or Feline Interstitial Cystitis. This neurological condition can adversely affect a cat’s ability to eliminate.

Rolling may mean something is causing your cat to itch. This can be a sign of dermatitis or something more serious. If you notice these behaviors, especially if unusual mood changes or meows accompany them, it’s essential to talk to your veterinarian as soon as possible.

Rolling around in a clean litter box may be a re-creation of a feral cat’s way of bathing. Outdoor cats roll in the dirt as a way to remove the top layer of extra fur and bacteria that may itch and make them feel dirty. When cats don’t have access to the outdoors, they roll in the litter box as a way of dust bathing. While it may seem counterintuitive to get dirty in order to feel clean, many mammals do it.

Why Does My Cat Scratch The Sides Of The Litter Box?

This annoying habit often indicates that your cat is not happy with the current condition of the box. Cats like a clean place to relieve themselves, and are sensitive to odors that build up. Scratching is often a clue that the litter box needs cleaning.

Since they are sensitive to odors and textures, the scratching may also be a sign of aversion to the type of litter you’re using in their box. Artificial scents often accompany litters. Your cat will have their preference for the type of litter, and finding that might be an exercise of trial by error. At the same time, a strong odor can cause an aversion, and if you’ve tried a new litter with a strong smell, your cat may not approve.

Do Cats Like It When You Clean Their Litter Box

Cats are usually thrilled when their litter box is cleaned. An unsoiled area for the most sensitive of activities is a relief, which is why sometimes cats will use the litter box immediately after you clean it!

Some territorial cats may also enjoy re-marking their territory each time you clean. This helps them feel they are asserting their dominance over other cats in the household, or just re-establishing the litter box as the space in the house that is theirs.

Occasionally, a cat may get angry or even attack you when they see you cleaning their box, due to territoriality. If this happens, you can try cleaning the box in a different room, distracting your cat with a toy they like, or briefly shutting them in a different space while you clean it.

Since rolling in the litter box is likely a sign of your cat wanting to clean its top layer of fur, try helping them out with a thorough brushing. This can also scratch itches your cat has been trying to reach. You can also try a smaller, more shallow litter box that won’t have a lot of room for your cat to move around.

It might help to switch from a typical dust litter to pine, crystal, or pellet litter. This will seem less like dirt to your cat and possibly discourage them from rolling around to give themselves a dust bath.

If you’re comfortable with your cat going outside and have precautions in place, making it safe for them to do so, let the kitty out to roll in the dirt. This helps them scratch their itches and remove a top layer of fur and bacteria, serving as a natural bath. Though your kitty may be dirty when they come back inside, you’ll see the dirt start to dissipate, and their coat will be softer and cleaner.

If your cat is rolling in the box excessively, they may have a skin condition that’s causing them to itch. That means it’s time to head to the veterinarian.

Cat litter is expensive, so it’s important to try to stop playful behavior as soon as possible. Try these five things to curb the unusual behavior of hanging out in the litter box:

Make sure there are enough boxes in the house

The general rule is to have one box per cat, plus one additional box. However, it depends on your cats. Some cats like one box in one place, while others like to explore and have options. However, the more boxes you have, the more your cat will feel like they have locations that are their special territory. If you have multiple cats, you can avoid scuffles between felines by having multiple locations for them to do their business.

A covered litter box might provide a bit more privacy. A self-cleaning litter box will be less comfortable. And a smaller, shallower pan won’t provide them with the same sense of security.

Make sure the box is clean

If your cat is tossing litter around, digging excessively, or scratching the sides of the box, it may mean its time to scrape it out and get fresh litter inside. Clumping litter or an auto-cleaning litter box are the easiest ways to make sure the pan is quick and straightforward to clean and scoop.

A pan with less litter in it won’t be as satisfying to roll in, and won’t have much to dig in. It will, however, need to be cleaned more often.

If your cat uses the litter box to hide or is feeling territorial, the problem may not be with the box at all. Suppose there has been a change or wrench thrown into their routine. In that case, your kitty may just be indicating that they need some extra love and time to adjust, particularly if other unusual behaviors are accompanying the litter box problems.

If things are new or even temporarily out of the ordinary, make sure you’re spending time with your cat playing, cuddling, talking to them, or just being nearby. You know your cat better than anyone. If the problem seems emotional, give them some extra attention for a while. If the problem persists and your cat still seems anxious or troubled, take them to the vet or a cat behavioral specialist.

A litter box is a special place

Cats consider their litter box very special, and it can also be an indicator of emotional or physical problems. Litter box behavior is essential to keep an eye on, as it may reveal something you didn’t know. So pay as much attention as you can, even if you have to hold your nose!