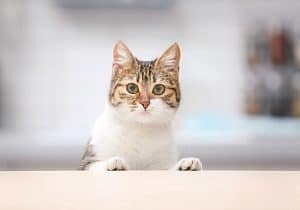 Let’s face it: we all talk to our cats. Sometimes it’s in front of others, and sometimes when it’s when we’re home alone. Since they’re a member of your family, you’ll be affectionate toward them. But when you spend so much time with them, you may be wondering, why do cats respond to kissing noises?

Cats respond to kissing noises because they can hear high-pitched noises that mimic nature’s sounds and have learned the noise from their owner.

There are two reasons why cats love your kissing noises. One is biological. Have you ever heard that women are more sensitive to high-pitched sounds so they can hear a baby crying? Well, your cat is the same way. The kissing noise you make is probably a higher pitch than your normal speaking voice, so it attracts your cat. The other reason is that they learn the sound. Cats are smart animals. If they know that you’re calling them with that noise, then they’re going to come to you, especially if you reward them with a treat or scratches.

But those kissing noises aren’t the only noises your cat loves to hear, so stay tuned to see other sounds you can use to communicate with your cats.

What Do Cats Hear When We Talk To Them?

Cats can hear like you and me. Of course, their ears are more sensitive than ours, so they can probably hear more than we can. Cats, unlike humans or even dogs, can hear higher pitches and may also be more attracted to high pitched sounds.

Cats recognize our voices when we talk to them often. Do you ever notice that your cat comes when you make a noise, but when your husband calls him, he looks uninterested? He knows your voice and any of the noises you make, like a kissing noise or the typical “pspsps” cat owners always make.

How To Get Your Cat To Respond To You?

So we know that our cats can hear us, but does that mean they’re always listening? Well, that one can probably be debated. Even the best cat owner knows that there are times where they wonder if they’re just a ghost because the cat is completely ignoring them. You can try calling their name a dozen times, but they’re still staring blankly from their cat perch across the room.

Sometimes, you don’t always need words to attract your cat. You have some options. Have you ever tried noises? There are many everyday noises that people make around cats that attract them better than words might.

Why Do Cats Come When You Say Pspsps?

Even some high-pitched kissing noises. Chances are, you’ve even heard non-cat owners make the noise when they spot the neighborhood stray. It’s almost like second nature when you see a cat, and more times than not, the cat comes running to the noise, even if the cat is unfamiliar with you. So what is it about that noise that attracts cat so easily? There must be something to it if every cat is drawn to it.

Is There Science to Explain It?

Unfortunately, you’ll need to be the one to discover the scientific reason that cats love this noise if you want a concrete answer backed by science. Researchers still aren’t positive why cats are attracted to this noise, but it’s undeniably that they love it. Since there’s no scientific answer, let’s talk about some theories scientists have:

Theories vary, as you can see, but it’s obvious there’s a deeper meaning than a simple noise people like to make. I think the most important takeaway is this: Whatever the reason, if it gets your cat to come running, it’s the noise to make!

Do All Cats Speak the Same “Language”?

Here’s a fun fact, though! Did you know that the sounds you call a cat with vary depending on what country you’re in? “Pspsps” is used more often in America, but you may hear other variations of similar sounds used to call a cat. Next time you’re abroad and want to talk to the local stray cats, don’t fret if they don’t respond like cats usually do. You may have to speak their “language”!

What Other Sounds Do Cats Respond To?

Maybe even the kissing noises aren’t working right now. What is going on?

Now, you’re wondering if your cat has gone deaf. You know they know their name, so why aren’t they coming?

If your cat seems to ignore you when you’re talking to it, what other sounds can you make that your cat might respond to? What are the other sounds that your cat always comes running to? Once you begin to think about this, you’ll start to realize just how many different sounds your cat knows (perhaps even better than its name).

Cats respond to all kinds of noises, not just the general “pspsps” or “ksksks.” Noises that the cat hears every day can attract your kitty immediately. They can also send your cat flying under the bed faster than you can even see them. Many of these examples also show that cats learn things – and fast. Chances are some of the responses that are biological, but your everyday life shows that your cat probably learns positive and negative sounds around it. They can respond by coming or running away.

Okay, so there are noises cats just love, but what if you wish to talk to your cat? Sometimes you need someone to talk to! Your cat may not give you the best conversation, but cats like to be talked to!

Cats can learn speech patterns and sometimes even imitate your speech (in cat speech, of course!).

I remember that I would come every day after school and greet my cat like I would my mom. After some time, my cat started to respond to me and would even meow at me if I didn’t say hello to her! She may not have known that I was greeting her, but she knew that when I came home, I would talk to her, and she demanded that conversation every time I arrived home! That goes to show you that you aren’t the only one enjoying the conversation you’re having with your cat!

Next time you wonder if you’re strange for talking to your cat, remember that your cat enjoys it. It is a bonding moment that allows your cat to start to recognize your voice, even if your voice is making that “pspsps” or kissing noise.

Hopefully, now you have a few ways to get your cat to respond to you. If calling their name doesn’t work, you have other options, so maybe “pspsps” will be your weapon to get your cat come running to you. If that doesn’t work – and you’ve already exhausted yourself calling their name over and over – trying opening a new can of cat food or shaking their favorite bag of treats. Even if they may be uninterested in you, their stomach may not be!

What Sounds Do Cats Respond To? - BestCatArt.com

[…] mammal is more likely to respond to their own species’ sounds than any other sounds, and your cat is no exception. If you’ve ever played a video of cats […]