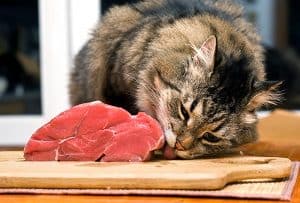 If you’re enjoying a turkey sandwich, there’s a decent chance your cat will want to snag a bite. This makes sense, as deli meats like turkey and chicken activate your cat’s desire for animal meat. As obligate carnivores, they may sniff around your sandwich and even try to steal some! But is this safe? Can cats eat deli meat?

Cats can eat deli meat with proper portion control. Cats need a large amount of protein in their diets and require full nutritional needs from their cat food. Cold cuts can contain high levels of sodium-rich preservatives that are bad for your cat. Safe deli meats include turkey, chicken, and roast beef.

We all know cats can be pretty persistent when it comes to getting the snacks they want, so if your cat is interested in your human food, it’s essential to know what is okay to share. In this article, we’ll dive into which deli meats your cat can enjoy, which ones they should stay away from, other human foods that can be good for their diet, and making sure your cat gets the best balance they can from meat and other sources.

Can I Give My Cat Cold Cuts

Cold cuts can be shared with your cat in moderation. However, it’s important to remember that the cold cuts and deli meats you purchase at the grocery store contain high sodium nitrite levels. This chemical is used on the meats to kill off harmful bacteria and gives the meat its pink coloration. The way nitrites work in the human body is very complex, helping to destroy harmful gut bacteria and potentially initiating a condition that causes oxygen to be carried by red blood cells.

Sodium nitrite is not healthy for humans in large amounts, and it’s no better for your cat. In a recent study of nitrites in pet food, veterinarians determined that only about 1% or less of cat’s food should contain this chemical. Cats are very sensitive to sodium in general, and it’s essential to regulate that in your cat’s diet.

Moderation is the key, as with many treats (for humans and felines!). It’s fine to give your kitty a little bit of your deli meat if they’d like some. You can tear off a couple of fingertip-sized pieces to share as a nice treat.

Is It Okay To Feed Ham To Cats

Ham is much more unhealthy for cats than turkey, chicken, or roast beef deli meats. All ham, including what you get from the deli, contains more preservatives, fat, and sodium than its bird and cow counterparts. There’s a reason you don’t see cat foods containing pork. The fat content in pigs is far too high for your feline. Animal fats are an important part of a cat’s diet, but the fat ratio in ham and other pork products is too high to work with the protein in their systems.

In addition to the naturally high-fat content in ham, deli ham also contains high modified cornstarch levels. Through your cat’s food may contain some cornstarch; it is a carefully balanced and FDA regulated amount. Ham also contains sodium phosphate for moisture and acidity, driving the sodium levels far above what your kitty can handle.

This doesn’t mean, however, that your kitty won’t be curious about ham. To them, the smell of animal meat is irresistible. So it’s important to keep your cat away from your ham sandwich, distract them with a treat, or just avoid eating it in front of them.

What Meat Should Not Be Fed To Cats

Cats should not eat any meat that is especially high in sodium or contains a lot of preservatives. This includes ham, bologna, salami, bacon, or anything made from a pig. The fat, sodium, and preservative content are far too high and can wreak havoc on your cat’s digestive system.

In addition to pork, pre-packaged tuna or other fish types should be generally avoided, although they can occasionally be a nice treat. While you often see fish in cat foods, fish cooked or pre-packaged for humans is different in makeup and can lead to mercury poisoning if consumed too much. Tiny amounts are okay but should be consumed very rarely. And no matter what, don’t ever share your sushi, as raw fish can contains thiamine, an enzyme that destroys your cat’s much-needed B vitamins.

What Human Foods Are Safe For Cats

There are several human foods that cats can enjoy. Most kitties will show an interest in human food at some point, so knowing which ones they can eat is essential. Moderation is critical, but as long as you exercise caution, many human foods are safe to give to cats, including:

● Most vegetables, with cucumbers and veggies with high water content being the most desirable.

Remember, cats are a significant presence in our lives, but their stomachs are different in makeup from the human stomach and are only about the size of a ping-pong ball! So a small, fingertip-sized bite or two of these foods are all they need, even though they may try to con you into more!

What Are Some Cat Food Alternatives

People looking to avoid the expense or potential nutritional deficits of cat food can create their own food for their cats at home. Knowing what’s going into your cat’s food gives you peace of mind and control over the balance of your feline’s diet.

Balance IT’s terrific tool helps you build a recipe for natural food from items you may already have in your home or can easily get from the grocery store. Components include meats, beans, grains, fruits, vegetables, and oils. The site also has options for recipes to help a sick cat and cooking demonstrations to make homemade food a breeze.

Though it might be more time consuming, a homemade diet for cats can ultimately be more healthy, provided you are making sure there is plenty of protein included. Make sure to discuss your kitty’s specific health needs with your vet before switching to a homemade diet.

As this article has mentioned, cats need and crave meat. As obligate carnivores, they require animal flesh to survive. To some, it seems natural that a raw meat diet, similar to what a cat would get in the wild, makes perfect sense when it comes to feeding them the best protein sources.

The proverbial jury is still out on this concept. Considering the problems with the sodium and additives in deli meat, raw food seems to be a natural solution. Holistic veterinarians often recommend a raw food diet enhanced with calcium supplements for a cat’s optimal nutrition. The biggest argument for this is avoiding starches that can usually be found in cat food. Cats eating raw food need flesh, organs, ground bone, and a small number of vegetables, typically leafy green items, in each serving of their food.

Others say raw foods are dangerous to cats, pointing to the fact that while a raw food diet mimics what a cat might get in the wild, cats in the wild do not live as long. This is because raw meat can contain parasites. Most professional associations, including the American Veterinary Medical Association, officially advise against feeding cats raw meat.

Deli And Cooked Meats Are Fine In Moderation

Despite their sodium nitrite content, a small amount of deli meat every once in a while is fine for your cat. The same goes for the human foods listed in this article and those recommended by your vet. Just remember your cat’s stomach is small, and what seems like a tiny bit to us is more than enough for them to enjoy. Watch out, though! Their eyes are bigger than their stomachs, and if you’re not careful, your cat will take that turkey sandwich right out of your hand!