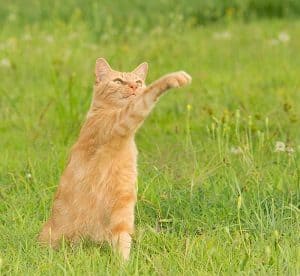 Have you ever witnessed someone suddenly drop something out of nowhere, and they catch it instantly? It’s incredible how quickly they’ve reacted and prevented the item from hitting the floor. This is the perfect example of when you would say someone has “cat-like reflexes.” But what does that mean? It’s common knowledge that cats have insanely fast reflexes. So the question is, how fast are cat reflexes?

Cat reflexes are extremely fast and can reach speeds of 30mph. They have an impressive ability to run, swat, balance, and jump nine times their own height. Cats reflexes are at least 1.5 times faster than dogs.

Do Cats Have Faster Reflexes Than Dogs

Yes, cats do have faster reflexes than dogs and cats jump higher than dogs too. When it comes to running in particular, the average cat can run about 1.5 times faster than your average dog. They also tend to have a faster reaction time and are much more agile.

While there are some exceptions with speed, like comparing a Grey Hound to a standard domestic house cat, that’s obviously going to have a different outcome. Or think of comparing a Cheetah to a Golden Retriever, that will skew the numbers the other direction.

If you look at the reflexes as an ability for a cat or dog to quickly hunt their prey, you’re going to see cats typically have the upper hand on their agility and ability. However, it would help if you considered what they’re hunting. A cat will become obsessed with hunting a fly, spider, mouse, or anything small and quick.

A dog may not even give the fly a second look. They’ll probably shake their head to get it away from them. They tend to go after something a bit bigger. Because of this, a cat needs to have the speed and agility to capture these small but extremely quick critters. If they didn’t, they would have no chance of survival out in the wild.

While there are exceptions with this, if you’re thinking of big cats like Lions or Tigers that tend to hunt bigger prey, if we think about your standard house cat, they will keep their focus on the small pests or birds and squirrels teasing them outside the window.

Do Cats Have Faster Reflexes Than Humans

Cats have faster reflexes than a human. Cats are typically quicker than the average human. Even an Olympian that trains daily to run will be beaten when it comes to a contest with a cat.

A cat also has much faster eyesight than a human. While their ability to see further away is nowhere near a human’s abilities, they can focus on movement much faster that is in front of their face. This is important for a cat because it allows them to catch their tiny prey.

Cats are much more flexible and agile than a human. This gives them the upper hand on reflexes in general as well. They also have a much better sense of balance, which allows them to react to a situation faster than a human may as well quickly.

Do Cats Have Faster Reflexes Than Snakes

If we are looking at speed alone, yes, cats are faster than snakes. A snake can typically top out at about 12mph when they’re slithering away. A standard domestic cat, on the other hand, can reach speeds of about 30mph.

Now when it comes to a snake striking vs. a cat swatting, that may be a little up in the air. They’re such different animals that the way they react to situations is like apples and oranges. There have been tons of reports where a cat does get bit by a snake, so they certainly don’t always have superior reflex skills.

In most circumstances, cats have better reflexes because of their flexibility and agility. When it comes to a snake, they give them a run for their money. A snake does have a backbone, but you would almost think they don’t when you see them. Their ability to completely coil themselves up makes them appear more flexible than a cat.

How Good Are Cat Reflexes

Cat reflexes are excellent. It’s awe-inspiring. Having an animal that small that can get up to 30mph is crazy to think about! Even beyond that, a cat can jump up to 9 times its height while they’re standing. That’s amazing!

You’ve probably heard of cats always landing on their feet. It’s an actual reflex that allows them to do this. It’s called the righting reflex. Their spines are super flexible, enabling them to wiggle around while they’re falling to correct themselves.

What’s even more impressive is that a cat will be an expert at righting themselves between 6-7 weeks. That’s before they’re even supposed to be spayed or neutered. These animals are truly incredible.

How Do You Test A Cat’s Reflexes

It’s typically best to have an experienced professional perform any testing for your cat’s reflexes. With that being said, there are some basic testing you can do at home to get an idea if you should seek professional help.

An easy way to test the cat’s reflexes is with the positioning of their paws. If you flip their paw under so the top of the paw is placed on the ground, seeing how long it takes them to flip it back over or pull it away can be a sign of an issue. They should immediately realize it’s flipped and try to correct it.

You can try to dangle a toy above them to see if they try to bat it around and if their speed and reflex seems to match what they previously would do. If they seem to be slower than normal when swatting or aren’t swatting at an accurate location like they normally would, it’s worth having them checked out.

If your cat is one that loves chasing a laser pointer, that’s an excellent way to see if they’re still balanced and agile like they normally are. See how they do chasing it and if they seem to be a bit off.

Why Is My Cat Suddenly Sluggish

Your cat may be sluggish because they aren’t feeling well. Cats are good at hiding pain, so one sign that can give away their discomfort is if they seem lethargic.

This could be that they’re having some sort of illness or infection. It could be something as simple as the common cold. However, it’s very important to have them seen by an expert, especially if this is something that’s lasting for a while.

It’s good to take notes of exactly how they’re acting and what they are doing that is out of the norm for their daily routines. This will help the vet or professional narrow down what is causing their problem.

If you notice, they seem to be sluggish in the way of not wanting to jump up on certain things. Maybe they hesitate a lot when normally they would go for it, which can be a sign of some pain.

If your cat has any arthritis or joint pain, making big jumps like that now may be painful. The same with their reactions to playing with you. Their swats might not be as quick because it just doesn’t feel good.

How Do I Know If My Cat Has A Neurological Problem

There are a lot of tests you can do to see if your cat has any neurological problems. The test of flipping the paw over and seeing how long it takes to turn it back over that we discussed previously can be a sign.

If it takes them a long time to recognize the paw is flipped, it may be that there’s an issue with a nerve or something within their body is just not “clicking” to allow them to realize it.

If you notice your cat’s gait and the way they’re walking are off, that is another potential neurological problem. They may appear off-balance or overall just uncoordinated—basically the complete opposite of how your cat would typically behave.

If your cat has started to have any seizures, it’s vital to have a professional check them. They can do blood work and other testing to try and identify if there is a neurological problem causing the issue.

Overall, it’s no question that cats have incredible reflexes. This is what makes them such cool pets. They’re fun to play with, great hunters, and just awesome in general! Keep an eye on your cat and their usual reflexes so you can quickly tell when there’s a problem.