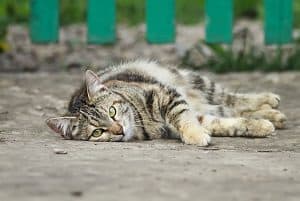 If you’re a cat owner, you know that cats are weird. They do things that we can’t always explain. Rolling on concrete is just one of those behaviors—cat lovers can’t fully rationalize it, but we try anyway! So, why do cats roll on concrete?

Cats roll on concrete because the surface is warm or cool their bodies. Concrete is scratchy and dirty, and your cat may be rolling on it to tend to its coat or soothe its muscles.

A cat rolling on its back can be communicating something to you and tending to its own needs simultaneously.

Why Do Cats Roll On Their Backs When They See You

Contrary to what many people think (alright, maybe just dog people), cats are incredibly affectionate and social creatures. If your cat rolls on its back when it sees you, it feels at ease around you.

Whether you’re a kitty’s favorite person or simply non-threatening to it, it might show you its belly. Cats only show their bellies when they know they won’t be attacked.

Just because a cat is belly-up doesn’t mean you have the “OK” to rub it. I learned this the hard way from my eldest kitty. While the younger one practically lives for belly rubs, the eldest immediately becomes agitated whenever someone touches her stomach.

She’ll meow sweetly and roll onto her back, seemingly asking for a belly rub. The first time she did this, I patted her tummy—which I quickly deemed a mistake. She unsheathed her claws and grasped my arm tight while biting and kicking furiously.

I quickly realized this reaction was, surprisingly, all in good fun. She was just play-biting me. Nevertheless, it still hurt, and belly rubs remain off-limits for her.

A belly-up cat may seem too cute to be threatening. However, you should still try to keep your distance if you’re unfamiliar with the cat and its personality.

Cats like hard surfaces. Hard surfaces allow cats to readjust their bodies, get a good stretch, and to work out any muscle soreness they may have.

It is so hard for cat owners—me included—to believe that cats prefer a cold, hard floor to a warm, soft bed, but sometimes they do.

Whenever I see my cat lounging on the hardwood floor, I feel an overwhelming urge to move them to a pillow, a couch; anything soft. This urge is just human nature. We’d rather lie in a bed, so we assume that our cat babies would, too.

It’s natural for cats to like hard surfaces, given their wild instincts. Their ancestors slept high up in lumpy, rough trees, not in plushy, exposed meadows.

I’m pretty sure everyone has looked at a kitten and felt the overwhelming urge to wrap it up in the softest blanket on earth. In reality, your kitten wants to burrow in a cardboard box or curl up on a shelf in your closet. My one-year-old kitty sleeps in a tight corner between the dresser and the wall, right on the hardwood floor.

If you see your cat lounging on a hard surface such as concrete, there’s no need to move them. If it’s a temperate, sunny day, they’re probably soaking up the heat, and they’ll move if they get too hot.

One thing to remember about cats is that they gravitate to comfort (or what they classify as comfort, that is). They’ll do what they want, and most times, their preferred snoozing spot is right on the ground.

7 Reasons Your Cat Rolls on the Ground

Feline behavior is puzzling. It can be challenging to identify the specific reason as to why your cat rolls on to its back at any given time. The reason can change depending on the environment, the situation, and your cat’s mood.

Cats often roll around in dirt or grass to cool off on hot days. Strangely enough, they’ll also stroll over to concrete surfaces on warm days to soak up the heat.

Just make sure to keep your kitty away from concrete on a hot summer day (generally above 85 degrees), as it could burn its paws while walking across it.

Here’s an interesting article that talks about the ideal temperature for cats. If you notice your cat laying on concrete in the Summer, chances are they might be too cold and need to warm up. Adjust your thermostat, and I think you’ll notice a change in their behavior.

As a female cat in heat rolls around on a surface, she releases pheromones. This is her way of signaling to males that she’s ready to mate.

If your cat isn’t spayed, your concrete driveway may be the closest spot to all the neighborhood male kitties. Cats have strong scent glands and may be going to that location as a result.

If you notice that your cat is in heat, you should move her inside or get her spayed—too many kittens are born every year with not enough homes to take them in.

After spaying, see if the behavior changes.

Tending To Their Coat

Instead of water and soap baths, cats love dirt and dust baths. Getting under the fur in a rougher way is sometimes more pleasing to them.

My outdoor kitties run in the house every night coated in dust and plants. One of them is pure white; she looks a dusty reddish-brown by the end of the day.

Cats roll in the dirt to soothe itchy skin or remove parasites and plant matter such as foxtails. Concrete driveways, being uneven and scratchy, work even better—and won’t leave your cat covered in dirt.

Your cat would simply be claiming your concrete driveway as its own by rolling on it. Your kitty doesn’t want the neighbor’s cat walking all over it.

Sometimes, your cat rolls over, and you know its time for belly rubs. Usually, they’ll chirp, meow, and slowly blink at you.

If this is the first time petting your cat on its belly, approach slowly. If you move your hand too fast, you can elicit a defensive response of biting and scratching.

Cats showing their belly on concrete are getting the best of both worlds—they’re enjoying the warmth and receiving belly rubs from their favorite person.

When a cat rolls on its back from side to side, it’s saying: “come play with me!” You’ll likely want to break out the feathers and catnip because your kitty’s ready for some playtime and exercise.

Concrete, being a hard surface, is an excellent place for cats to run and jump. Just remember to have your cat on a harness if it’s not an outdoor kitty.

Dirt, grass, and concrete are all scratchy, uneven, and simulating surfaces on which your cat can stretch and massage its muscles. If your cat is outdoor only or indoor/outdoor, it’s probably doing some serious running and pouncing, and its muscles are likely in need of some TLC.

A belly-up cat is one of the cutest things out there. It’s natural for us to want to understand this adorable quirk.

As humans, we may never fully understand cats and their behaviors, no matter how much we want to. For now, we’ll have to continue guessing the motives behind their cuteness.

link to How Fast Are Cat Reflexes - Speed And Agility Explained

Have you ever witnessed someone suddenly drop something out of nowhere, and they catch it instantly? It’s incredible how quickly they’ve reacted and prevented the item from hitting the...

If you’re enjoying a turkey sandwich, there’s a decent chance your cat will want to snag a bite. This makes sense, as deli meats like turkey and chicken activate your cat’s desire for animal...