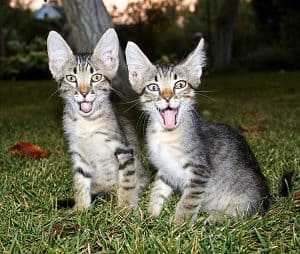 If you own cats, you’ve probably felt like your cat was laughing at you at least once. Maybe you tripped and fell in front of them, and their reaction convinced you that they were laughing. Even worse, maybe your cat slowly and deliberately knocked a glass off the table while staring at you the whole time.

Cats don’t have a physical laugh reaction. Cats have evolved not to show their emotions because showing too much emotion, lowers their chances of survival. Generally, when people think their cats are laughing, they are anthropomorphizing some other expression on their cats and trying to relate it to human emotion.

If you’re not a cat owner, those reactions can seem completely nonsensical. After all, cats are an incredibly stoic creature. They don’t show their emotions with the same intensity that dogs or other people do, and it can be easy to think that cats can’t laugh because they don’t have a sense of humor. Still, your cat does have some mood indicators and facial expressions you can read.

Do Cats Have A Sense Of Humor?

This one is harder to answer. Cats may have a sense of humor, but the chances are that they won’t think your favorite joke is funny. However, when something moves unexpectedly, or a toy does something they haven’t seen before, cats can seem surprised and amused.

Some cats will even look like they are laughing and try to make the thing that amused them happen again.

It’s hard to say whether that reaction is a manifestation of humor, which is hard to read and evaluate, or curiosity, which cats have. Chances are, most of the time, when your cat engages with something, they are interested in learning more about it, don’t quite understand it, or it satisfies some of their instincts.

We mentioned that cats don’t show emotions much because it can hurt their chances of survival in the wild. That’s a pretty typical response for many animals, but it’s not an indication that the animal doesn’t feel.

Cats need to have consistent behavior to catch prey and make sure they have a safe place to sleep. They also need to appear strong and confident, especially if they encounter other cats and competing predators.

All cats will display some emotion some of the time. Some cats are more excitable than others, which can reflect how much they trust you and their environment. But most of the time, cats are going to be relatively calm and stable.

Calm behavior keeps wild cats alive, and even though your average housecat doesn’t need those survival instincts, they don’t know that.

Ways to Tell That Your Cat Is Happy

Of course, that’s not very helpful for cats’ human companions. If you’re a cat owner, you want to know what your cat is thinking and feeling so you can make sure you’re giving them a good environment. Fortunately, cats do have some subtle cues that can tell you how they’re feeling.

Here are some signals that you cat his happy, or at least content, with the way things are.

Your Cat Is Very Vocal

Meowing is a cat behavior they display specifically when they want your attention. Cats don’t meow at one another, except when they learn to do so after meowing at people.

Cat to cat communication in the wild isn’t audible to humans. Meowing is a kind of kitten communication that they use until their vocal cords can produce inaudible cat to cat sounds.

Since humans don’t hear those sounds, cats quickly learn that meows are a more effective means of communication. So when your cat meows, they are trying to tell you something. A cat that talks a lot is a cat that feels like this communication is effective and gets them the things they want.

Usually, that means that your cat is pretty happy.

Of course, cats will also meow to yell at you or let you know that they are unhappy. Usually, those kinds of meows are lower-pitched than happy communicative meows. A high-pitched meow is a happy cat meow.

There are two main reasons your cat purrs. If your cat isn’t feeling well or is hurt, they might purr because they are asking for your attention and care. They do this in the wild both as a way to ask for attention from other trusted cats and to comfort trusted cats.

But most of the time, your cat is purring because they are happy and content and want to share the feeling. Purring is a comfort mechanism, so a happy cat can purr to make the other cats (and humans) around them happier.

Slow blinking cats are often mistaken for tired cats. That’s because, in another person, a slow blink would be a great way to tell that that person is tired. Your cat might slow blink when they’re tired, but they are more likely to do it just because they are relaxed.

Between two cats, slow blinks are a sign of confidence and trust. The blinking cat is signaling to the other cat that they are comfortable and not feeling aggressive.

If your cat slow blinks at you, they’re saying the same thing. It’s a sign that they trust you, that they are comfortable around you, and that they’re not likely to behave erratically right that moment.

Relaxed and forward is a happy cat. Pressed back on their head is usually an intent, angry, or scared cat. Or, if your cat moves their ears all the way forward in an active/tense way, they’re probably trying to hear something better, like a mouse. It means that they are paying attention.

If you talk to your cat and their ears stay forward and relaxed, or forward and alert, your cat is relaxed and happy. Even in alert posture, that just means that your cat is engaged with you and is paying close attention.

Just like the eats, a cat’s tail posture can be a great indicator of their mental state. Since their faces aren’t as mobile and expressive as yours, their tail can serve a lot of that purpose.

A tail that sticks straight up without puffed fur or that is straight until a slight curve at the tip is usually a sign of a very happy cat. Some breeds of longhair cats won’t stick their tails straight up, but it will rest fairly straight out from the back, that posture means much the same thing.

Straight, and not moving much, is your cat’s relaxed and content posture.

A curvier tail that’s still tall is another sign of a happy cat. Curvy tails usually mean that your cat has a lot of energy and is feeling playful.

But you should always be concerned about puffed fur or a tail tucked under your cat’s back legs or around their stomach. Those are signs of agitation or fear in your cat and a sign that they are trying to protect themselves.

This is a kitten-behavior that adult cats occasionally use. It’s a good sign that your cat is relaxed, as long as they aren’t showing other signs of distress.

The main theory behind kneading is that it’s a leftover from nursing when the paw movement on your cat’s mother’s belly encouraged milk production. If your cat is kneading on you, a nearby blanket, or just about anything soft, they’re happy and relaxed. The kneading reminds them of being happy as a kitten.

A cat that is relaxed enough to play around with a toy in front of you is a cat that really trusts you. That’s because playfulness is one of the most expressive and vulnerable things a cat can do. If they’re playing around, they feel very safe.

A particularly happy cat might bring you toys or ask for you to play too. If you’re playing with your cat, you’re signaling to them that you’re happy and relaxed with them too.

Of course, not all cat play is fun and games for their owners. When your cat knocks a glass off the table or a favorite decoration off the shelf, it can be more annoying than endearing.

The thing is, your cat isn’t just wantonly destructive for no reason. Your cat is trying to engage with you and ask for attention. They might not want lovey attention exactly, but knocking things over, especially with eye contact, is a bit like playing a practical joke on you.

They don’t expect you to be happy, but they want to get a reaction and know that this is one way to do it.

It’s also a sign that they are happy and curious, as well as a sign that the cat trusts you. After all, you wouldn’t play a practical joke on someone you didn’t know well and like, would you?