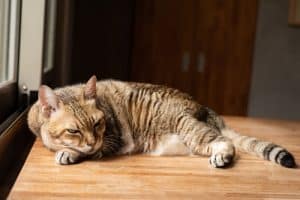 Cats often exhibit strange behaviors, but grunting is one of the stranger ones! Have you ever heard one of your quirky kitties grunt? Fear not – though odd, it’s completely normal behavior! So, why do cats grunt?

Cats grunt as a friendly gesture and to show affection. Grunting can occur when a cat jumps, stretches, after they eat, or during sleep. It can also be a sign of pain if the grunting lasts for a long period.

If your cat is about to hiss or yowl, she might grunt as a warning before the real action begins. However, a grunt could be a sign of pain: if it continues for an extended period, it might be her way of expressing her distress. Let’s take a look at the various reasons cats grunt, and what you can do to make sure your cat is in good health.

What Does It Mean When Cats Grunt

Cats grunt for many different reasons. Some are mundane, like sleep grunts, or jump grunts, or post-dinner grunts. Some are friendly – ever heard a grunt combined with a purr (which is easily the second cutest grunt after sleep grunts)? And some are warning grunts if your cat is upset or distressed.

Not sure what your cat is trying to say with his grunts? Look at his body language. Does he seem annoyed, with his ears back and his back arched? That grunt may be a pre-hiss or yowl warning – as if to say, “get away from me before these grunts turn into something more dramatic!”

Some, however, are just little quirks that your cat exhibits every once in a while. A grunt could be his body processing food or gas.

But please keep in mind! Some grunts are grunts to pay attention to! A cat may grunt when he’s in pain; if the grunting feels excessive or unnatural – book an appointment with your vet as soon as possible. Sometimes it’s difficult for kitties to let you know when they’re in pain!

On a lighter note – a grunt might also be affable! It could simply be her way of saying hey, or saying – well – “I love you”!

Sometimes, cats might grunt when they’re partaking in something physical, like a big jump. Have you ever grunted while you’re, for example, lifting weights or throwing something far? It’s a normal way to physically get into something. Another time cats grunt: in their sleep! Which, if that’s not the cutest thing ever, I don’t know what is. Many cat owners have claimed to hear their kitty emit tiny grunts during slumber; it’s not clear why – but it may have the same root cause as snoring. Or maybe Kitty is just having a good dream!

So maybe this is something you’ve noticed for a while, or more recently. And you may wonder: is it normal for cats to grunt? Why does your cat grunt when you pet her? Or when you pick her up? Or when she breathes?

Is It Normal For Cats To Grunt

It is normal for cats to grunt – mainly depending on the circumstance. Cats may grunt for various reasons, many of which are normal: from grunting in their sleep to grunting after eating to grunting when they’re feeling a certain kind of way.

However, keep in mind that if your cat is overweight, the grunting may be more frequent than for a normal-sized cat. Excessive weight on an already small body may put additional pressure on the lungs and cause narrowed airways. So if you have a particularly “fluffy” feline, talk to your vet – it may be time to switch to low-calorie cat food!

Why Does My Cat Grunt When He Breathes

If your cat grunts when he breathes, this could be a sign of obesity! Too much weight on a cat’s body may cause his airways to narrow, which results in frequent grunting (and maybe even snoring).

Be aware! Obesity can cause many more problems than grunting – excessive weight can also lead to a host of other issues like arthritis, diabetes, skin disease the list goes on. Your chunky fur child may not appreciate a diet, but it could save his life.

However, frequent grunting is not always a sign of obesity. Some cat breeds are more prone to grunts. Squashed, short-nosed breeds like Persians, Burmese, or Himalayans can have narrow airways, which leads to this odd breathing noise.

Why Does My Cat Grunt When He Jumps

Your cat grunts when he jumps for the same reason you grunt when you jump! It’s completely normal and natural to make a bit of an “oof” sound after physical exertion like that.

Try it – take a giant leap, and see if you don’t also involuntarily make some grunting sound! It’s merely the lungs exhaling strongly; we all do it, even your kitty.

Why Does My Cat Grunt When I Pet Her

Your cat grunts when you pet her merely as a friendly “hello, I like this!” Cats have funny ways of expressing themselves – and their appreciation for something – and sometimes, that way is through a strange but complimentary grunt.

Pay attention – often, a friendly grunt is accompanied by a purr or a trill.

It’s normal for cats to grunt when you pet them – unless, of course, your version of petting is too firm. In which case, she’s trying to brace herself! Try soft, gentle strokes; if the grunting continues, she’s just saying hey.

Why Do Cats Grunt When You Touch Them

Cats often grunt when you touch them because – well, no offense, but – you probably disturbed them!

Kitties love being cozy and comfortable (hey, who can blame them?). So if someone rubs on them during a snooze or while they’re hiding out on their favorite closet shelf – they may get a bit perturbed. It’s sort of like when someone wakes you up from a nap; you’re not angry, you know, slightly annoyed!

Don’t worry, they usually get over it; but you know cats – they have no problem expressing their displeasure in the meantime!

Why Does My Cat Grunt When I Pick Her Up

A cat generally likes to be in control of a situation, so when her paws leave the ground, it’s not her ideal position (although sometimes she’s just so adorable, there’s no controlling your arms from scooping her up. Believe me, I get it).

Personally, getting picked up and cuddled sounds amazing to me, but cats – for some reason! – think differently. But don’t worry – she’ll get over her annoyance. It’s not your fault; she’s so darn cute.

Why Does My Cat Grunt Instead Of Purring

It’s okay if, instead of purring, your cat grunts – that may be the way that she expresses her purrs!

Depending on the breed, weight, or just individual cat, purrs differentiate! They’re not all a traditional hum; some cats have unique airways, and a grunt is more natural to them than a purr.

Why Does My Cat Grunt When He Sleeps

Your cat may grunt in his sleep for a few different reasons – but usually, it’s because of dreams or, simply, obesity.

Kitties don’t sleep very heavily (ever notice how easy it is to wake yours up?), but occasionally they do still dream. And those dreams might come to the surface, pouring out into the form of a few grunts here and there. This is generally normal (and, let’s be honest, absolutely adorable).

However, many obese cats grunt in their sleep. Extra weight on a cat’s body leads to narrowed airways, which – just like humans who snore – leads to unusual breath during sleep.

If you think it might be the latter, be sure to ask your vet. It might be time for a diet!