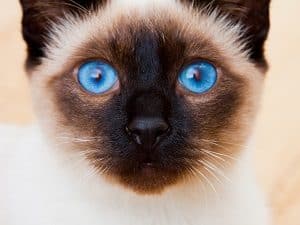 Siamese cats are a special breed that many people enjoy because of their unique fur patterns and striking blue eyes. They were once royalty in the ancient kingdom of Siam that is now Thailand. While Siamese genes may hide in other cats, yet there must be genes in both parents to yield the great pattern and telltale blue eyes.

This is why all siamese cats have blue eyes! Siamese cats have specific genetic traits that breeders have encouraged for hundreds of years. Blue eyes are a result of recessive genes. Both parents must have the gene for the cat to present with blue eyes.

All cats have captivating eyes in a variety of colors. Most people think of bright eyes glowing in the dark when they think of cats. There is no surprise with properly bred Siamese cats. Most breeders take care to keep their cats from mating outside the proper gene pool.

This is Why ALL Siamese Cats Have Blue Eyes

Siamese cats have a type of albinism. This can be a little difficult to wrap your head around, as they obviously do not look like traditional albino animals. The genes responsible for the blue eye color, however, represent temperature-sensitive albinism.

This temperature-sensitive albino appearance is also why their coats are different colors on the extremities. The gene is sensitive to heat, so the color on the core of their body is different than their legs and tail.

Siamese cats are all-white when they are born because albinism trait is active in the warm temperature of the womb. They stay warm while they are nursing and cuddled up to the mom, as well. Eventually, they venture away from mom, and colors start to change.

The Structure of the Eye

The basic structure of the eye involves the iris and the pupil. The iris has two layers. The cells in these layers affect eye color.
Pigmented cells are present in most cats. Siamese cats and a couple of related breeds, however, do not have this pigment. This is because of the temperature-sensitive albinism gene.

The blue eyes of a Siamese cat appear because both layers of the iris lack pigment. Blue eyes can still be present in cats that have pigment in one layer, but the eye of a true Siamese cat has no pigment. If you observe carefully, you’ll notice that the shade of blue changes in different environments.

All colors on the spectrum are available in the iris, yet humans see the blue because the wavelength is shorter than the other colors. If you know about early science, you may also know that the wavelength for violet is also short. Humans have a hard time recognizing this, however, so our eyes focus more on the blue.

Siamese cat eyes are blue because humans see them that way. It is interesting to think about how other creatures might see them.

Siamese cats did not always look the way they do today. Royal families in Siam (now Thailand) began domesticating them in the 14th century. Significant changes came with selective breeding when Siamese cats came to Europe in the late 18th or early 19th century.
Modern Siamese cats have a pointed coat pattern, a triangle-shaped head, and a slim body.

The original version of the Siamese cat was much rounder all over. The older version is still available today. Experts call this a traditional Siamese cat or a Thai cat. Selective breeding for a slimmer Siamese cat began because of the preferred shape for cat shows. Earlier Siamese cats also had crossed eyes and bent tails. The blue color of the eyes, however, has persisted.

The albino gene that causes the blue eyes causes the eyes and brain to lack proper communication. This neurological issue leads to severely crossed eyes. Breeders have mostly eradicated the crossed eyes in modern Siamese cats.

The other problems that go along with the albino gene persist. Night vision has not improved, as the extra layer necessary in the eye is still absent. Breeders want the blue eyes to continue as the main feature; therefore, this is unlikely to change.

Breeders also consider bent tails a defect. Over the years the iconic bent tail of the historic Siamese cat disappeared. There is no shortage, however, of bent tails in Thailand’s standard cat population.

Cats are known for their accurate view and night vision. Cat owners often encounter a pair of glowing eyes in the dark. Siamese cats may be less likely to wander around in the night, however. They have problems seeing in the dark, possibly resulting in an injury.

Siamese cats still have the trademark night vision, but there are limitations. Regular cats may see small features, while a Siamese cat may only see a basic shape. This is another effect of the temperature-sensitive gene they carry.

Ordinary cats also have another layer on their eyes called the tapetum lucidum. This layer provides the perfect setup for large amounts of light to get through the retina. Siamese cats, therefore receive less light into their retinas. This can cause imperfect eyesight during both the day and night, yet it severely limits night vision.

Siamese cats are known to be demanding. They let their owners know when they want attention or don’t like something. They may go to great lengths to get their way. This attitude, like the gene for blue eyes, can inhibit necessary natural instincts.

Food is a common problem with Siamese cats. They may decide they do not like their food or simply hold off on eating to get something better. It is essential to get as much nutrition as possible into each meal.

With the lack of night vision and willingness to stop eating, you may wonder how a Siamese cat could survive in nature. As with all domestic animals, Siamese cats have a lot of learned behaviors that would not suit them in the wild. When you combine this with unique breeding practices, you get cats that need human care in a safe environment.

Many animals with albinism genes have health problems. Siamese cats have a shorter lifespan than most cats. You can expect your Siamese cat to live about 10-12 years. Many other breeds live over 20 years.

Siamese cats fall prey to mammary tumors, feline OCD, and Feline Hyperesthesia Syndrome. They are, however, more resilient to urinary tract problems. You should watch kittens closely for lung issues, as well.

While the lack of pigmentation can cause deafness in white animals, Siamese cats are not prone to hearing loss. The gene does not cause a complete lack of pigment, and it is just dependent on body temperature.

In their native kingdom of Siam, Siamese cats lived in royal households, and the Burmese stole them. After the Siamese and Burmese War, the Burmese associated these cats with wealth after reading a poem about them. They thought they would become rich if they owned a Siamese cat.

It is unclear if this is a legitimate reason for a low population of Siamese cats in Thailand today. Some say this is only a war story, fictional in nature. Breeding efforts do take place today in Thailand to preserve this historical pet.
Some accounts also say the cats are only associated with royalty because only wealthy people could afford to care for pets. Either way, the cats of Siam lived in luxury.

There were also stories of the Siamese cats taking the souls of deceased royalty. This allowed the deceased to remain in a temple with servants and enjoy a luxurious life.

The crossed eyes and bent tail fit into a myth about a Siamese cat guarding a special vase. The legend says the cats became cross-eyed from staring carefully at the coveted vase. The story also says that the tails of the Siamese cats became permanently bent because they kept them wrapped around the vase.

Another myth states that the bend in the tail resulted from holding the princess’s rings on the tail. The tail needed to bend so the rings would not slip off.

The poor night vision does not keep Siamese cats from leaping around. They are very agile and energetic. During the day, they can still see details well. This allows them to enjoy jumping up to the highest places in your home.

Don’t be surprised if you see your Siamese cat on a top shelf or on top of the refrigerator. Their slim, long bodies allow them to reach great heights gracefully.

Keep your Siamese cat entertained by providing tall scratching posts for them to climb on. Don’t expect them to stick to their own items for climbing, however. Cat proof your home, so your Siamese cat stays safe and turn the lights on if they want to do some nighttime prowling.

The Cost Of That Beautiful Blue

Serious breeders are conscious about the traits they encourage. Customers pay a hefty price to get a show quality Siamese cat. You can expect to pay anywhere from $400 – $1,000 for a Siamese cat. Some may not even come with papers.

These cats do not live as long and require a lot of attention. You must make a proper commitment when you bring a Siamese cat into your home. You are paying a significant price for a particular look. This look comes with added responsibilities.

Siamese cats should not roam alone outdoors because of their limited vision. In the dark, they can easily walk into traffic or become injured from conflict with another animal. A desire for human attention also is a feature of the breed, and a Siamese cat lets you know when it wants attention.

The blue eyes on a Siamese cat are a result of the gene allele that affects their entire body. Their albino genes determine the color of both their fur and eyes. The eyes of Siamese cats in the past were cross-eyed due to the neurological effects of the lack of pigmentation. The structure of the eye, however, also causes a problem.

A layer of the eye is missing, controlling the amount of light that reaches the retina. Don’t’ expect your Siamese cat to be a great hunter in the dead of night. Modern Siamese cats look different than the ancient ones in many ways. The striking blue eyes, however, have not changed.