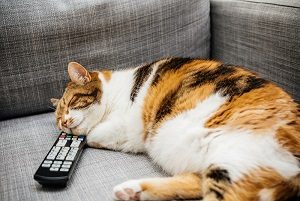 Cats are perhaps the most interesting pets out there. Having owned a tabby cat myself for many years, I still find myself asking questions about why they do this and that. One of the more interesting things I noticed was my cat watching TV one late evening. His eyes were fixated on the screen and it really seemed as if he truly knew and understood what was going on in front of him. So I got to thinking about whether cats can actually watch TV and decided to research it. Here’s what I came up with!

So, can cats watch TV? Yes, cats can watch TV but process images differently than humans. TV images are tougher for cats to identify to see because they process at a rate of 70 – 80 Hz; faster than what TV’s show. Cats can see many of the same colors although some red colors are desaturated.  Cats can also identify different sounds, outlines, and movement on television screens.

Although some cats can watch TV just as well as humans do, it does not necessarily mean it’s always a good thing. In this article, we’ll talk about some of the reasons why you may or may not want your cat to watch too much television. We’ll also share some interesting facts about the cat’s TV viewing habits and how their vision works overall!

Is It Bad For Your Cat To Watch TV

So here we are. It’s a late-night and your fur pal is a few inches away, sitting upright and watching Animal Planet. At first, it was a cute thing, but now you start wondering whether your cat should be watching TV that many hours.

The short answer is, no, its really not bad for your cat to watch TV. However, you may want to limit the amount of television they watch and the distance from the television. Cats who watch a lot of TVs can’t really tell the difference between what’s real and what isn’t. If a program were to come on that showed bugs flying around or mice, there’s a high chance your cat may jump at the TV to try and attack it.

It’s really not their fault though because it may look like a toy or prey to them. Unfortunately for the owner, your TV can suffer some serious claw marks or worse stop working altogether.

Below are a few tips you can use to still let your cat watch TV while still protecting your valuables.

You and your family might enjoy turning on the TV, but most of us wonder if our pets can enjoy television as well. After all, your cat or dog might seem to be watching the screen, but are they really paying attention to what’s going on?

Pet owners with multiple cats often wonder why one cat seems to pay attention to the TV, while another cat doesn’t seem interested at all.

Understanding What Your Cat Sees On The TV

There are a few things that can change how your cat interacts with the TV. One of the most important is what your cat can see on the TV. That depends on how old your TV is, and your cat’s ability to perceive depth and color.

Newer TVs have a much higher refresh rate on screen. That means that the image on the screen changes faster, creating the illusion of movement.

While it might look like your TV is presenting a real moving image, the truth is that the image is continually refreshing between a series of still images. Your brain can’t process the individual images before a new image appears, which is what makes them appear seamless, and makes movement look smooth.

But cats can perceive individual images much faster than humans can. So on an older TV with a slower refresh rate, it probably looks more like a series of flickering stills to your cat, not movement.

As TVs increase their refresh rate, real movement looks more convincing to your cat, which can increase their interest and understanding of what they are seeing.

Color and Depth Perception For Cats

If your cat has a normal vision, they have excellent depth perception and can see yellow, green, and blue colors. That means that, while they don’t see in technicolor, the actual images your cat sees are relatively similar to the images you see.

Comparatively, dogs have poorer depth and color perception, which might be why your cat is more likely to be interested in the TV than your dog.

However, cats that only have one eye, have had a bad eye infection, or other changes to their ability to see are less likely to perceive your TV the same way. That means that they are a little less likely to find the images interesting, even if they can see them.

Can Your Cat Understand TV Sound?

Chances are your cat can hear what’s coming from your TV. What’s not entirely clear is whether the audio sounds natural to them, and what volume levels are most comfortable.

Cats also are probably a little confused by the sound from your TV, since their hearing is designed to help them pinpoint the location of prey. However, like with framerate, newer televisions with better sound systems are probably more convincing.

What Does My Cat See On The TV?

We’ve already mentioned that cats see things differently, but the differences extend beyond a different sense of the color on the screen.

Your cat sees the images on the TV as a series of stills – even with the newest TVs. Humans need around 20 frames per second, or higher, to see movement on a TV as smooth and clean. Cats would need about 100 frames per second to have the same experience.

That doesn’t mean that the movement on-screen isn’t interesting. It’s just a bit more like dancing under a strobe light than smooth continuous movement.

Your cats might also be slightly blinded by the TV. Their eyes are designed to see in the dark, and while they can contract their pupils to reduce the amount of light they see, images on the TV probably still look pretty bright even more so if you turn the brightness up on your TV’s settings.

Is Watching TV Bad For My Cat?

The good news is that TV isn’t necessarily a bad thing for your cat. Some experts think that a TV could be adequate enrichment for a bored or lonely cat if turned to the right kind of programming.

If your cat tends to watch TV somewhat absently, occasionally stopping and looking at the screen while doing other things, that’s probably a good sign. That means that TV is another source of stimulus for your cat, but that they have plenty of other things to occupy their time.

Your cat might also sit down and actively watch TV. If they do this, you should pay attention to what programming attracts their attention. If your cat gets anxious when you’re away, or seems distressed or bored, you might be able to use that programming to give them mental stimulation.

If your cat gets a little too invested, you might want to try and gently train them away from the TV. Avoid letting your cat get too close to the TV screen. Just like humans, being too close could damage their sight or hearing over time.

If your cat tends to pounce at or jump at the TV, you should train them not to with a spray bottle or positive redirection to a toy or other stimulus. That’s because pouncing can damage your TV, and if your cat miscalculates, they might also hit the TV too hard and injure themselves.

Like anything else in your pet’s life, moderation is key. If your cat is interested in the TV, go ahead and let them show that interest. You can even leave the TV on when you’re away to keep them distracted and entertained. But your cat should get at least a little time away from the TV, too.

There is another reason your cat might be watching the TV that we haven’t discussed yet. They might be mimicking you!

Cats might not display their affection in the same ways dogs will, but they are usually very devoted to their owners. One of the ways cats can show that devotion is by trying to be involved with whatever you’re doing, even if they don’t entirely understand it.

That’s why some cats will ‘sing’ along when you’re belting out your favorite songs. It can even explain odd behaviors like sitting on your keyboard or standing between you and your computer screen.

These behaviors might seem irritating to us, but they are your cat’s way of telling you that they know what you’re doing is essential to you. Since they are about you, they want to be involved. It’s a bit like a friend letting you talk about your favorite hobby, even though they aren’t interested in it themselves.

If your cat only seems to pay attention to your TV when you do, even if it’s on most of the time, they’re probably mimicking you more than they are really interested in the TV.

Pet owners who have a cat that seems to watch the TV often wonder what kinds of programming their cat might like.

The truth is that there isn’t anyone type of programming that is guaranteed to interest every cat. Just like people, they have a distinct personality with different interests. One theory behind cats watching the TV is that the most interested cats are likely to have higher prey drives than other cats.

So, it’s a good idea to start with shows that have lots of motion. Some people notice that their cats pay particular attention to shows with cars and other large, fast-moving objects. But our preference is for nature shows, particularly shows featuring other cats, birds, or small mammals.

That’s because those are images that your cat would naturally pay attention to in the wild, so those shapes and sounds are likely to stimulate a response in addition to the movement on the screen.

Pay attention to what your cat seems to engage with most, and who they engage with. Some cats might enjoy watching Tom and Jerry because they watched it with your kid growing up, as an example. Even though they know the characters aren’t real (cats can tell the difference between real people and cartoons), every cat will have different tastes.

Once you know what your cat likes, don’t be afraid to let them watch away. Just maintain good behavior and give them some TV breaks too.