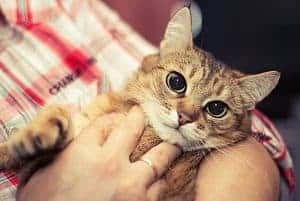 Anytime you have to give a cat away, it can be sad to lose that bond. It’s true; cats don’t recognize the idea of having an owner, but surely they remember all the good times right? Despite that, they are very capable of bonding with their caretakers and appreciating them. But, do cats remember their old owners?

Cats can remember their old owners. Cats that’s were reliant on you for their needs such as food, water, and social interaction will remember you. Painful experiences and fear also remain in a cat’s longterm memory. A cat’s memory can last for months to several years.

This doesn’t mean that a cat cannot form another bond with a new owner. Cats are adaptable, like most animals, and, if shown the proper amount of respect and love, a new owner can develop a strong, affectionate relationship.

How Long Do Cats Remember Their Previous Owners

It’s hard to give a concrete number, but research seems to agree that a cat’s memory is similar to a toddler’s, perhaps a two or three-year-old. It’s important to note that a cat can have one bad experience and avoid anything that reminds them of that experience for the rest of their life!

A lot of the length of a memory depends on how much of an impact it made on the cat. If the previous owner is associated with bad feelings, like pain or fear, the cat will probably remember that for a long time.

Cat intelligence makes for a good subject, in theory, but researchers have yet to scratch the surface. It’s traditionally been much easier to study canine intelligence because dogs can be trained to perform tricks and respect the orders issued by their owners. On the other hand, cats may appreciate the treats and food you offer, but they’re much less likely to obey an order or perform.

Do Cats Miss Their Previous Owners

It’s hard to quantify longing and grief in other animals that we can’t communicate with, especially in felines. If the previous owner treated the cat well, with frequent treats or special toys, a cat who suddenly finds themselves in a shelter would probably long for their old home and their caretakers. In the case of an elderly owner passing away, if the cat continues to live in the same house, they may go looking for the owner.

Sometimes, when a kid goes off to college, the family cat will go meowing around their old room and sleep on their bed. It’s easy to see that the cat missed them if they come back home on break, and the cat wants to be around them. Cats notice when someone goes missing, but it’s not always clear whether they miss that person or are just confused as to why they’re gone.

Will My Cat Forget Me After 2 Weeks

No, your cat won’t forget you after 2 weeks. Whether it’s 2 weeks, 3 weeks or even more, your cat will not forget you. Especially if they depend on you for their daily routine of eating and social activity, they’ll actually be looking forward to those interactions.

Cats have exceptional memory capacities. Their memories, like other animals’, are tied to their senses. If you have a distinctive combination of smell and sound or give your cat specialized food at the same time every day, your cat isn’t likely to forget it anytime soon.

Similarly to humans, special events make the biggest impression. Your cat will remember the routine, but he or she will remember when you held them up to the window to watch a bird or when you took them outside on a leash. Cats have been known to remember kids who go away to college and only come home once every few months, or even less often.

Just because your cat doesn’t look for you, or greet you with special enthusiasm when you return, doesn’t mean they didn’t miss you! They certainly notice when you’re gone, but they’re adaptable and know that life must go on.

Do Cats Miss Their Owners When They’re Rehomed

It depends on their relationship with their previous owners. If it were a positive relationship, the cat would probably miss them for a while, especially while the cat is getting used to its new environment. Scientists have tested cats and found that they can recognize individual humans and notice when their living situation changes. Still, they’re not quite sure whether cats miss their old routine or their owners specifically.

Despite that, if a cat’s new owners are attentive to their needs and provide fun stimulation and treats, the cat can quickly bond with them, which can ease the longing for the previous owners. Cats are practical animals; they adapt quickly to their new lives and learn to make the best of it.

Do Cats Remember Their Old Homes

Most likely! You’ve probably seen stories on the internet, or movies, about a cat who has been taken away traveling absurdly long distances to find their way home. Cats have not only great long-term memories but also a very good sense of direction. In the wild, big cats have a specific territory that they roam within, and their domestic cousins are no exception. While the stories we see are exceptions, not the rule, cats are pretty proficient at not getting lost. We don’t recommend testing your cat’s survival skills, though!

Additionally, if a cat moves, with his or her family, and, for some reason, goes back to visit their old house, the cat will likely return to their old hiding places and haunts. I moved with my cat a few months ago, and when I go back to visit my parents’ house, my cat always finds my old room and hops up on my bed.

That entirely depends on the cat’s new situation and how much time and effort the new owner can put into the relationship. It also depends on the type of relationship that the cat had with its old owner. In the case of abuse or neglect, a cat is much less likely to trust a new human immediately and is likely to be aggressive or anxious in their new environment. Additionally, a cat’s age is essential to consider. Even in the best-case scenario, an older cat will probably have more trouble adjusting to a new owner than a younger cat.

Other factors to keep in mind include other animals or humans present in the new home. A cat will also have to adjust to other humans, cats, or animals already living there and may face obstacles because of them. Small children and dogs can be frightening! Not to mention, previously owned cats may be intimidated by older cats who are already established in the household.

If the new owner is patient and willing to respect a new cat’s boundaries, all other things being equal, there’s no reason they wouldn’t be able to win their cat’s trust in a few weeks to a month. However, it is essential to remember that cats are individuals with different needs and adjustment periods. Your cat may take longer to get used to you and its new home, so be patient and go slow. Your kitty will thank you!

Do Cats Dream About Their Owners

Sure they do. The fact that kitties dream when they sleep is old news. Their twitching whiskers and paws give that fact away. Much like humans, cats use dreams to store and process the information they learned during the day.

Cats indeed spend a lot of time every daydreaming; they’re just organizing all of the events they witnessed when they were awake. That includes their owners. Owners are a big part of a cat’s life, whether they consider them an ‘owner’ or a ‘caretaker.’ The more involved you are in your cat’s daily life, the more likely they are to dream about you!

Do Cats Remember Other Cats

This heavily depends on how long the cats interacted and is impacted by whether the cats lived together or not. Littermates and other cats who live in the same household, exchange scents, and recognize each other if they’re separated, although we aren’t sure how long that scent lasts.

Additionally, cats can form strong bonds with non-related cats who share their home and go looking for them after they leave or pass away. They’ll typically look around the house for a missing person or animal for a few months, but it’s not clear whether that’s when they forget the one who left or just stop expecting them to come back.