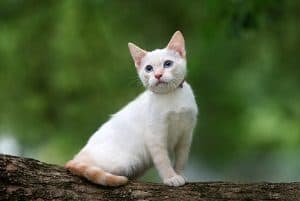 Siamese cats are known for their outgoing personalities. Talkative, active, and bonded to their humans, these long-celebrated felines are a coveted family member. But Siamese cats are divided into many types, dictated by color and breeding. Cross a Siamese cat with a red or orange tabby American shorthair, and you have what is known as the rare Flame Point or Red point Siamese. Since they are so rare, they present a lot of questions. You may be wondering, how do Flame Point Siamese cats behave?

The rare Flame Point Siamese cats, by owner accounts, tend to have the best personality traits of the Siamese and the red or orange tabby variety of the American shorthair. They are sweet, funny, loving, and adaptable personalities. Some have unusual traits and behaviors, but still tend to be good, adoring pets. However, they are not for everyone due to their need for attention and love of exercise.

Flame Points are a treasure, but not the right match for an owner who doesn’t want lots of attention from their cat! In this post, we’ll break down some of the most critical areas of the Flame Point’s behavior and needs and find your own Flame Point.

How Are Flame Points Bred

Flame Point Siamese is a cross between a purebred Siamese cat and an American shorthair with red tones. Purebred Siamese is cream or white cats with “points” on their ears, faces, tail, and feet. While you may think of a Chocolate Point Siamese cat with dark brown points, three other point colors are considered purebred: Lilac, Seal, and Blue. These different colors appear in the same places but create a very different look for each cat.

To create a Flame Point, a Siamese must be bred with a red or orange tabby cat. In doing this, the points take on an orange color, which gives the breed their name. They typically have cream or white bodies and retain the piercing blue eyes that Siamese cats are known for.

Flame Points weren’t bred until the 1930s, and some additional experimentation was required to retain the coloring and ideal traits from Siamese cats truly. Classification among cat breeding associations has been complicated through the years, but the Flame Point Siamese is a real and beloved breed today. Interestingly, around 75% of Flame Points are male.

What Is The Personality Of A Flame Point

Both Siamese and red and orange tabby American shorthairs are known for their sweet and active personalities. Not much is known about why these two are so friendly. For Siamese cats, it may be due to the extreme admiration and attention they’ve always received. For tabbies, it could be due to the red gene, which was one of the earliest genetic mutations for domesticated cats, meaning cats with this gene have had the longest time to adjust to interacting with humans.

Whatever the reasoning, owners of these two types of cats have often testified that their feline is a sweetheart and a bit of a kook. The unique personality is, therefore, doubled in a Flame Point!

Flame Point Siamese tend to retain many unique characteristics of Siamese cats, including being very vocal, always active, and in need of a lot of attention. This can be a lot of fun if you’re up for it, but quite overwhelming if you aren’t prepared. Flame Points are always on the move and need your undivided attention for playing and exercising for a significant period of the day. They love to jump and pounce, and you could also find them stuck between couch cushions, caught in blinds, or other precarious situations due to their intense curiosity.

Since Flame Points are generally male, some sex-specific traits apply to them, mostly from their Siamese side. While the female Siamese tend to be more temperamental, males are much more laid back. This is also true of orange or red tabby American shorthair males. This makes the Flame Point a cat who is up for anything and loves to explore.

Flame Point owners have attested to many weird (though entertaining) behaviors, such as attacking their owners’ feet, obsessive needs for certain types of petting, having dominant personality traits among all of the animals in the house (even the non-feline types), obeying commands, running into things, constant and very loud meows to get their humans’ attention, extreme cuddliness, and love for playing with other cats.

Siamese and American shorthair cats tend to retain their loving personalities as they get older. So if you get a friendly Flame Point, you can expect many years of love, meows, and goofy shenanigans.

Flame Points tend to retain many of the physical and health traits of the Siamese. With their Siamese blue eyes, they could be subject to retinal atrophy as they get older. Siamese are also prone to PICA, a compulsive disease in which they are prone to licking or even eating fabrics and strange items. Finally, due to their high activity level, your Flame Point may see arthritis, hip dysplasia, and hyperesthesia.

All cats should eat a high protein diet, but Flame Point cats should especially make sure their diets are well-balanced between proteins and animal fats to keep up with their high activity level.

As they age, Flame Points are also prone to typical cat issues due to their American shorthair genes, including urinary problems and dental issues. Regular visits to the vet are essential to catch problems early and apply the treatment.

Flame Point Siamese are very rare. If you’re looking to add one to your family, the first option is to check for shelters in your area that cater specifically to Siamese cats. You may have to be willing to travel a bit to find them, but shelters list their available animals on their websites so you can know ahead of time.

Some Siamese cat breeders may also have Flame Point Siamese. Since many Siamese breeders are only breeding show-quality cats, Flame Points won’t be their priority as they are not considered purebred. This list includes breeders that may have some non-purebreds like Flame Points.

If you go to a breeder, it’s essential to do research first. Ensure they have good online reviews, documentation of exams and vaccinations, a healthy environment, and adequately socialized cats. Not every US state has breeders, so you may have to invest in travel to meet your Flame Point.

If you’re looking for a cat with personality, a Flame Point Siamese is perfect for you. These unique cats have great personal attributes. The breeding of the loving Siamese and the cuddly red or orange tabby American shorthair combines a lot of love into one cat. Ensure that if you get one, you have the time and energy to give them lots of love back!