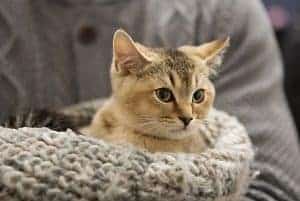 Cats come in all shapes and sizes. Whether its a large or small cat, the way they appear can say a lot about their health. For some of us, the appearance of our cat is concerning, especially when it comes to the size of their heads. Have you ever wondered, why does my cat have a small head?

Gender, breed, and body structure can cause a cats head to be small. Male cats that are neutered also tend to have smaller heads. Small heads may be a sign that a cat is not fully grown.

Let’s look at what a normal-sized head would be for a cat, and if you have a reason to worry about the size of your cat’s head.

Will My Cat’s Head Get Bigger

Yes, just like a human, cats’ heads increase in size as they grow. When I brought my Persian Mix baby home, he was an adorable ball of fur that weighed 2.5 pounds. Now he’s roughly 12 pounds, and his head is now the size of what his kitten body used to be.

Cats are fully grown at approximately one year of age, except for some breeds. If your cat is approaching a year and you think their head is too small, schedule a visit with your vet. They can check for any abnormalities. Keep in mind; most abnormalities make a cat’s head larger, not smaller.

If your cat is a Maine Coon, Persian, or even a Siberian, those cats keep growing well behind a year of age. Male cats also finish growing later than female cats. Even though my cat isn’t a purebred Persian, he kept growing until he was almost two.

So to put it simply, yes your cat’s head will get bigger, and you have to be patient.

What Breed Of Cat Has A Small Head

Some cats have a small head because they are petite breeds. The Devon Rex, Cornish Rex, and Munchkin cats are small in stature; therefore, they have small heads. Siamese cats are also on the smaller side, so their head size will be smaller than average.

In the case of all these breeds, their head size will be proportional to their bodies. They just have a small head to match their small bodies. Singapuras and American Curls are also small cats, with small heads to match. Some Scottish folds also seem to have smaller heads than average.

Some cats may look like they have a small head when you compare it to their bodies. This is common in cats who are obese or overweight. In that case, their head is a normal size. It’s just that their bodies are larger than they should be. If the cat loses the amount of weight it needs to, their head will look normal on a non-obese body.

I have a cat like that. She can’t be left alone during feeding because she will bully her brother and steal his food. Her excess weight makes her head look like a pea in comparison to her body. There is nothing wrong with her head; she just needs to drop several pounds to be proportional.

There isn’t a great deal of information on what is considered small, regular, large, etc. in cat head circumference. That will change based on breed. Even breed specific sites lack that measurement.

If you need to order a cat costume or soft collar for your feline, some products will base their sizes on how large your cat’s head is. While this can be a challenge, wrap a soft measuring tape around the widest part of your cat’s head to get this measurement.  If purchasing locally, you could always bring your cat in and do the measurements there. Some places will even allow your cat to test the costume out for comfort and proper fitting.

Do Unneutered Cats Have Bigger Heads

This is not an urban legend or your eyes deceiving you. Unneutered male cats, also called “tomcats,” have much larger heads than their neutered counterparts. Having spent time on a farm when I was a kid, every male cat on the farm had a massive head. Since I was young and no one I knew had an indoor cat, I thought that was how a male cat was supposed to look. That is no accurate at all!

The hormones in an unneutered male cat are what causes the giant head and chubby-cheeked look. The testosterone levels and orientation hormones are different in male cats who have been fixed. The lack of those substances means their heads and cheeks don’t grow like unaltered cats. Testosterone and hormones are in the testicles, which are removed in neutered cats.

Do Female Cats Have Smaller Heads

Females tend to be smaller than males in terms of their build. Because their body is smaller, their head should be smaller as well. This is not always the case though.

In fact, any change in head size should be in proportion to their body. A six-pound female cat should have a smaller head than a 12-pound male cat.

There are some extreme situations where an obese cat may have a smaller head than a fit cat. That’s normal too though as the head can only grow so much in proportion to the body.

What Age Is A Cat Fully Grown

The answer to this depends on the breed of your cat. The typical housecat is full-grown around the one year mark. While he or she will continue to mature, their body will stop growing. Various breeds have extended kitten cycles and are not done growing physically for several years. Persian males can take up to 2-3 years to be fully grown. Maine Coons and Siberians can take as long as 3-5 years to reach their full size. During this time, their heads will continue to develop.

If you have a cat that seems to have a head that is too small, it is worth discussing this with your vet. There is a condition that impacts the growth of a cat’s brain called cerebellar hypoplasia. The cerebellum doesn’t properly develop, which leads the cat to have issues with walking and other tasks controlled by that region. The condition can cause cats to shake intensely, but they feel no pain. Their skull shouldn’t be affected by it, but let a vet make that determination. This condition will be evident in any cat who has it.

Hydrocephalus is another condition that can impact the size and shape of a cat’s skull. This condition is also called water on the brain. It affects the ventricular system of the brain by irritating vessels or blocking them. Cats with this disorder will have heads that are an unusual shape. This condition normally causes a larger head, but let a vet be the judge.

Many factors contribute to the size of a cat’s head, including gender, breed, being neutered, and body weight. Even in petite cat breeds, their heads should be in proportion to the rest of their body. If you think your cat has a head that is too small for its frame, partner with your vet to make sure your cat doesn’t have a medical condition. There are not many, but some conditions can impact a cat’s brain size or skull development.

Don’t get too ahead of yourself, however. While a typical cat is done growing by a year, some breeds have extended kitten phases. Some breeds aren’t done growing until five years. Also, keep in mind that males finish growing after females. It could be that your cat’s head and body as growing and different rates and will eventually even out.